Tom Murphy-Dumping Bad Sculpture On The Streets Of Liverpool. 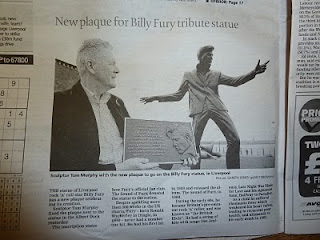 More street clutter from David Charters, of the Daily Ghost's, best mate. An advertorial in fact.
To have people commenting on art who don't understand it is a shame.
To have people on committees who don't own a piece of art or have never grasped the whole motion or concept of public sculpture is a disgrace.
You know who you are Fred Obrien & Co and those of you who commissioned, without a place to dump it, the heroic Captain Chavasse now ruined in bronze and suffering from a botox because Tom Murphy has no life modelling experience. Or appears not to have.
Murphy has let down so many of our heroes and characters in soul-less depictions, ripping off the public in the process. Here, Billy Fury, halfway to misery.
In spitting distance to the Johnnie Walker sculpture at the Pier Head who looks like he has had a bottle or two too many.  Alright hes not a looker but to do that to him is extreme. http://en.wikipedia.org/wiki/Frederic_John_Walker Billy Fury's official fan club, The Sound of Fury donated the statue. Thanks for that. The only fury I can hear the sound of is people saying "why did someone make his arms go down to his knees, did he sing the Funky Gibbon".
The new plaque looks more like the lead singer from A Flock of Seagulls, are they sure they have got the right statue. Now, I understand people mean well but we had the John Lennon turkey in John Lennon Airport, (above us CO2 emmisions). Interesting its Alastair Machrays favourite sculpture...well there you go.
Give peas a chance.
http://liverpoolpreservationtrust.blogspot.com/2010/10/peace-monument-unveiled-for-john.html
How many more crap statues can the city take.
So Tom brought us the Ken Dodd with a kebab alongside the Bessie Braddock that looks like a sack with a head on it. Even Kenn Dodd said "Well at least its somewhere for the pidgeons to sit."
http://liverpoolpreservationtrust.blogspot.com/2009/07/liverpool-european-capital-ofbad.html Read this.

Stop dumping shit on us at artificially high prices. I challenge Murphy whatever subject he wants I will sculpt  a better depiction than he can dream of making. Although he does have one talent, that of making Bronze look like cast iron, its supposed to be the other way around of course.
David Charters should never have been allowed to market this man, masquerading as an artist, pulling the wool over already blind eyes. There was a time when we commissioned some good stuff in Liverpool. Those days are long gone. 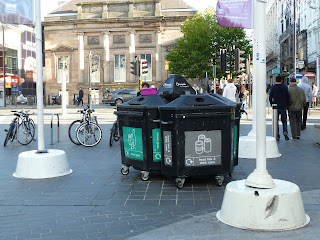 One sculpture that I used to like was the Boy with the Horse at the bottom of Bold Street opposite the Lyceum. It was said to have cost £150,000 and I used to love the way the public interacted with it. Though one day I saw a mother drag her child away in horror who was polishing a part of it that it should have been. It has now been turned into a....wheelie bin. Who robbed it? why was it moved? why didn't anyone at the Daily Ghost, er David Charters even notice?
So Liverpool European Capital of Bad Sculpture where we dump our good art to replace it with, Tom Murphy Turkey's....clever, the people who run our city, so cultured for sure.
Posted by Liverpool Preservation Trust at Friday, November 05, 2010