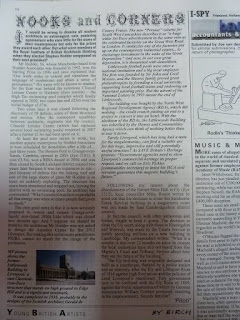 Private Eye's 'Piloti' again takes an interest in the forlorn hope that is The Littlewoods Building Edge Lane.
SAVE Britain's Heritage chip in with what they are good at saying
"Government Agencies need to show Liverpools Commercial Heritage its proper respect and we call on Eric Pickles to insist his HCA civil servants guarantee this majestic buildings future".

While Joe Anderson and his press office The Liverpeel Daily Post & Echo are telling everyone how wonderful it will be to lose the WHS by building over the Central Docks they have forgotten there is a need to quantify what we are allowing to rot in this city. Why not create jobs in Edge Lane.

The press did take an interest in this building when Wayne saved it from demolition by getting assurances from the then Council leader and committee member of the NWDA Mike Storey.
The NWDA then bought it.
Wayne made an application to have it listed and Marcus Binney of SAVE added his weight to the need to list it. The c20society also supported this application.
But there it is rotting.
It should have been the new Museum of Liverpool and that would have regenerated the area but it was too important an issue to Mike Storey that he was hellbent on destroying the unique character of Liverpool's World Heritage Site that he ignored Wayne plea.

Urban Splash claimed they saved it.
http://liverpoolpreservationtrust.blogspot.co.uk/2009/08/urban-splashare-they-drowning-in-debt.html
Posted by Liverpool Preservation Trust at Wednesday, May 30, 2012 No comments: Links to this post

Is Liverpools Regeneration A Plastic Facade of Bad Design. 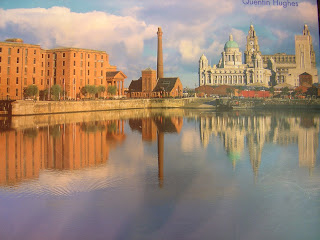 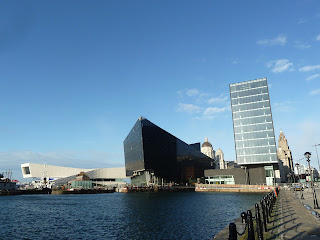 We live in an age where architects can largely only understand how to make boxes. Just look at the Three Black Coffins at The Pier Head.
Gone are the days of architects (or CAD monkeys as most of them are now called) can understand scale and its relation to the human spirit.
Crow-bared into the place of architectural equilibrium is a stagnation forced by the need of most architects to give up their past principles and start to understand the needs of the developer and his corner cutting methods of construction.


Where has the need to employ craftspeople gone,to make things that people can be overawed with? Why was Matt Brook of Broadway Malyan allowed to do this piece of architectural vandalism with a World Heritage Site.

Where did this cold calculating off the peg finish that has invaded our cities come from?
Why have the architectural schools trained a flock of sheep to plop the country with pieces of architectural rubbish?


A town is an open air museum Jonathan Meades says and there is some truth in this.
He says about Bilbao. http://www.bbc.co.uk/i/b01j5fw0/

That it spawned a new method of architectural regeneration that gave the idea that you jet in a jet lagged architectural big name to work within the parameters of the Regional Development Authorities grant structure.

He says Salford Quays is a soulless place of architectural bling full of museums with nothing in them.
He says regeneration of the new Labour years has been a racket.

Theories of city making and the icy perfection of regeneration comes into question.

Anna Minton who wrote the book "Ground Control" and worked quite hard to take into account the effect of Liverpool One style developments, and other gated communities on the people who live within and around them.


Have a listen to the radio 4 programme, which is an intellectual debate not based around Liverpool but it could be related to the past years of madness.

Posted by Liverpool Preservation Trust at Tuesday, May 29, 2012 No comments: Links to this post

Titanic Girl-Liverpool Dances On The Graves Of The Dead. 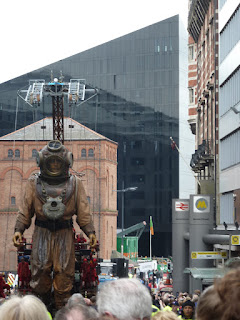 What a City Liverpool is, when they get together, and commemorate the worlds biggest Maritime disaster, by....having a party.
A Mercantile and Maritime world heritage site.
They get some second hand puppets that have been used somewhere else and pay some mad french bloke over a million quid while the city is in 60 million deficit and care homes are closing, to, have a party. Dancing on the Graves of the dead.
Someone has to say it
Ye of little education turn a disaster into a street party.
There really is a certain shame in doing this why not have a service at the Cathedral, a commemoration of the suffering of the screaming children who perished in the icy cold seas in some forgotten part of the Ocean.
No lets get all the kids out who have seen the film, that was also a joke, and give them a street theatre.
Only Liverpool could do this.
Here is "The Diver" or as I heard it referred to by a grown man "The Uncle" walking up James Street against the backdrop of the "Three Black Coffins"
But take a moment to note the right of the giant is the Old White Star offices. http://liverpoolpreservationtrust.blogspot.co.uk/2011/12/white-star-building-hit-by-storms-james.html
Albion House lays derelict and the crowds are oblivious to it. http://liverpoolpreservationtrust.blogspot.co.uk/2009/06/mann-island-tale-of-two-cities.html
To the fact that another of our historic buildings, maybe a bit more historic than most, where the families of victims of the corporate incompetence, that was the Titanic disaster lined the streets to see if their loved ones were dead or alive.
And most had the news of the latter.
So a hundred years later we dance in the streets...........the very same street that spelt tragedy and poverty for thousands.
It was even a special BBC Northwest programme that went out last night.
It was lovely the idea was good but sould not have been linked to a tragedy. http://www.bbc.co.uk/iplayer/episode/b01gyhzl/Liverpools_Titanic_Girl/

I may sound a bit of a killjoy I would have liked to enjoy it and did to a certain extent when I disengaged my brain, and I maybe I am thinking a bit too deep about it but...
Imagine in a hundred years Sheffield decides to put on a street theatre as a memorial to the Hillsborough tragedy.
Yes rightly so, we would be up in arms about it, but it is the same sort of suffering, deeper than entertainment, that the public lapped up, took hook line and stinker, without a thought for the real tragedy. 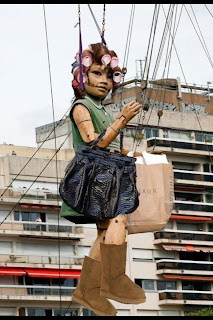 The Titanic Girl a giant street party for grown up kids and their children.
Maybe we should have had a true modern Liverpool theme and called her "Scouse Girl" and sent her round Grosvenor-pool, shopping in here curlers, wearing a giant pair of Ugg boots.........now that would have been entertainment.