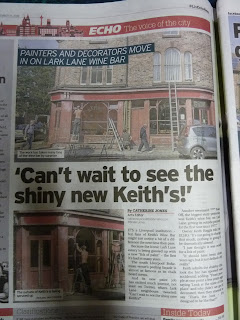 Another Advertorial from Trinity "Smoking" Mirror on Merseyside.
This time disguised as a article.
Lets explore. http://www.liverpoolecho.co.uk/whats-on/food-drink-news/keiths-wine-bar-gets-first-11884859
A wine bar in Lark Lane is.........being painted.
The world heritage site status is about to be removed and we have to put up with this sort of trash journalism that is not enough merit to be mentioned in the Merseymart, that The Liverpool Echo also owns.
Catherine you should be ashamed of yourself.
'Can't wait to see the shiny new Keith's'.
You have brought the Liverpool Echo reporting (sic) down to a new low.
Alastair Machray who has sacked more than half the staff and sent the printing press to Oldham, has obviously had to edit this trash. But he is a large part of the problem with little or no respect.
http://liverpoolpreservationtrust.blogspot.co.uk/2013/08/alastair-machray-apologises-but-its-too.html


Go and hang your head in shame Catherine.......... while you are having a free lunch at Keith's Wine Bar in Lark Lane.
This is the latest advertorial done by a whole series of moonlighters pretending to be writing news.
Yet the Liverpool Echo are cheeky enough to try to dupe the people who read it by doing an advertorial about Catherine Jones doing an Advertorial.
You couldn't make this up.......unless you worked for the Echo that is.
http://www.liverpoolecho.co.uk/news/newecho-catherine-jones-works-tirelessly-9488682


David Ward.
Posted by Liverpool Preservation Trust at Tuesday, September 20, 2016 No comments: Links to this post 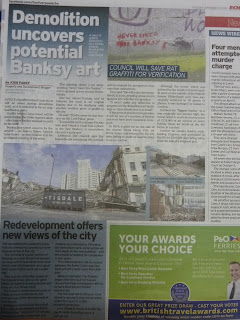 Its only a matter of time before, like a Banksy Rat jumping ship, the new kids on the block at Trinity "Smoking" Mirrors, or as know locally The Oldham Echo take the path to PR and print exactly what the council want them to.
Take a look at todays offering.
The Futurist is demolished despite huge public opinion and they are now to keep a breeze block.......and thats suppose to be news headlines, Come on!
Josh Parry you should be ashamed of yourself this is shoddy journalism indeed.
Now the "new kid" starts helping the rehabilitation process of the city council and their "Cosy" developer mates Neptune Developments after The Futurist was demolished in an act of Civic Vandalism.
This is no more than an advertorial piece of trash.

Josh you may still be in short kecks and be getting your nose wiped by David Bartlett but there are no excuses for this level of dross that have filled the Oldham Echo pages on the 13th September 2016.
Unlucky for some, but there are many gullible Echo readers.
In fact you would have to be gullible to buy the trash.
http://liverpoolpreservationtrust.blogspot.co.uk/2012/08/david-bartlett-takes-city-council-to.html

Shoddy journalism may be encouraged by Alastair Machray but once that corner is turned into the abyss of "hear no evil speak no evil", there is no turning back.
do a dance with the devil and you know the outcome young Josh.
It takes years of training to become a Liverpool Echo double dealing two face PR. allowing themselves to be spoon-fed like little children by local dodgy property developers PR molls who are well seasoned in manipulating the new snotty nosed kids on the block.
Not mentioning any names. errrr Jon Egan and his mate Mo.
Remember Liam Murphy and his PR spin for Peel.
In this internet age, he was happy telling the whole world that Peel have an investor, Stella Shiu, a high ranking Chinese government official who was protected by Kalashnikov wielding bodyguards. Who we exposed as a bankrupt in Hong Kong.
So now we have Josh Parrot stating that by knocking down the Futurist it is opening up new exciting views of the city. Yes parrots just repeat what people tell them.
You should be ashamed of yourself. Just look at the Stazi blocks that you can now see. Have he been out the office in the last year.
http://liverpoolpreservationtrust.blogspot.co.uk/2009/08/concourse-house-one-step-forward-and.html

He is now stating that a Banksy.........may have been found. Yes may have been found.
What a plant, and its worked.
The caption next to the cartoon, even reads "This is not a Banksy" and he still thinks it may be.
There is one born every minute.
Here is yesterdays post. This is where the headline is, you clown.
http://liverpoolpreservationtrust.blogspot.co.uk/2016/09/joe-anderson-spends-2000000-to-demolish.html
We will not believe a word he says in future.
This article is a disgrace to the many good journalists out there who try to do decent work.
Parry may not like it but if he takes the time to have a long hard look at himself he this criticism may do him a favour. Though I suspect not.
Alastair Machray who has sacked more than half the staff and sent the printing press to Oldham, has obviously had to edit this trash. But he is a large part of the problem with little or no respect.
http://liverpoolpreservationtrust.blogspot.co.uk/2013/08/alastair-machray-apologises-but-its-too.html

Boycott The Echo you know it makes sense.

David Ward.
Posted by Liverpool Preservation Trust at Wednesday, September 14, 2016 No comments: Links to this post

Joe Anderson Spends £2,000,000 To Demolish The Futurist. Lime Street Will Never Be The Same Again.

If you are ever wondering why there are potholes in the roads and schools are crumbling, and your ageing relatives cant get a place in a nursing home because it has been closed. And they cant get the care they need then this is it.
Its because the money, taxpayers money, needed to run the council is going to Joe Anderson's property developer mates.
Two million quid spent helping his mates demolishing a decent building that was part of our history.
What does he get out of going against the wishes of the public who elected him?
The out of control Mayor of Liverpool has just spend the cash needed for services, servicing Neptune Developments.
So embedded are they, along with, quite a few other developers, that are, in bed with Joe Anderson that he has been blind to what his priorities are.
He was not elected to Spiv for developers.
He keeps on winging about how his budgets have been cut by the government, and he wastes millions helping his mates.
Lets hope that someday he is sitting there eating his 46 pies for lunch, and he gets a sharp prick to his conscience.
And he realises that he is not the Mayor of Liverpool, who was elected to destroy the heritage of the city and lose the hard fought World Heritage Site status.
He was elected to listen to the public.
We have to question also the rest of the staff at the City Council.
What does  Ged Fitzgerald the Chief Executive do about this waste of taxpayers money while claiming the Tory government are to blame.
And whatever happened to transparency about the council child abuse scandal while Ged Fitzgerald who is lying low, out of sight, was at Rotheram Council.
There appears to be another cover up.
http://www.liverpoolecho.co.uk/news/liverpool-news/liverpool-council-chief-ged-fitzgerald-7955864
Where are the so called journalists at the Liverpool Echo in following up this?

Come back Derek Hatton all is forgiven.


Posted by Liverpool Preservation Trust at Tuesday, September 13, 2016 No comments: Links to this post

Reclaim St Luke's Church and Preserve It As A Blitz Memorial........Before Its Too Late. 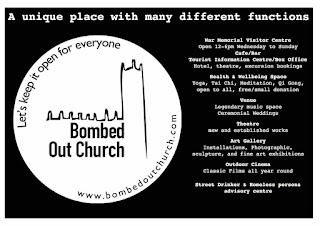 Why have the public now been barred from St Luke's Church and Gardens?
We are worried that, the people who should be in charge of our historic buildings, and St Luke's is registered with The Imperial war Museum as a memorial to the blitz, are being Gerry-Mandered by Malcolm Kennedy and his foolish idea of regeneration.

I.E Lime Street, which he was in charge of.

Read about some of Malc's previous work here.

The public do not want st Luke's, our church, our blitz memorial to be carved up as a trendy wine bar.
Or worse remember Lawrence Kenwrights idea for a wedding venue..

The Church and Gardens have been closed for repair for a year now.
So why aren't we the public allowed access again?

SAVE ST LUKES from another Malcolm Kennedy Regeneration disaster.


Posted by Liverpool Preservation Trust at Thursday, September 08, 2016 No comments: Links to this post

Email ThisBlogThis!Share to TwitterShare to FacebookShare to Pinterest
Labels: Malcom Kennedy, St Lukes Church
Newer Posts Older Posts Home
Subscribe to: Posts (Atom)
"THESE OLD BUILDINGS DO NOT BELONG TO US ONLY;...THEY HAVE BELONGED TO OUR FOREFATHERS AND THEY WILL BELONG TO OUR DESCENDANTS, UNLESS WE PLAY THEM FALSE.