Back before the United Nations being discussed before the World Heritage In Danger Committee along with Aleppo and other third world countries that cant look after their heritage.

not a brick been laid on Liverpool waters and not a job created!

Here are the links to the UNESCO 39th meeting in Bonnwhc.unesco.org/en/sessions/39com/There is a live feed transmission link on this websiteWithin above document is also this link to the timetablewhc.unesco.org/archive/2015/whc15-39com-3BRev-en.pdf
Posted by Liverpool Preservation Trust at Tuesday, June 30, 2015 No comments: Links to this post

The Oldham Echo-Alastair Machray Has The Cheek To Ask Whats Wrong With The Echo. #TellAli his paper is corrupt.

No wonder the news is always late here is a picture of the Echo Delivery Barge winding its way down The Manchester Ship Canal from its printing press in Oldham. 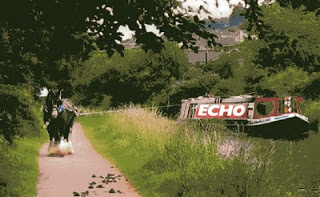 Now the Editor In Chief, of Trinity "Smoking" Mirrors, Alastair Machray realising that the Echo is now a dead man walking, (we warned them of this when the Daily Post went downhill).
He then has the cheek to ask whats wrong with the paper telling the public he is going to listen to the comments.
Don't believe a word of what this man says. He and his cronies deserve the fate that awaits them. Machray has brought this once trusted institution to its knees to a place where it has become a byword for PR trash and news put together from the Mayor Joe Andersons PR website.
We have been warning them for years and now they say they will listen. Don't believe a word #TellAli says the paper will not change the only reason they are trying to kick up a PR frenzy is to sell papers.
So if you want to buy a paper that helps the Manchester economy then go ahead.
Here's a better one#TellAli to Resign and we will all be better off.

Posted by Liverpool Preservation Trust at Wednesday, June 03, 2015 No comments: Links to this post 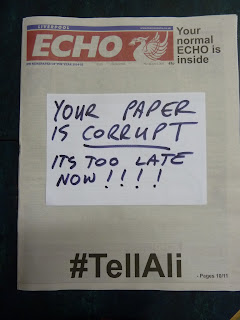 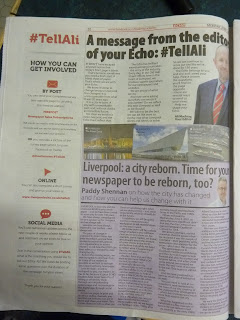 Tell Ali,
they are having a laugh, he has been told enough times, and does not listen.

His paper the once proud Liverpool Echo, is the lowest form of news openly pandering to the lowest common denominator of the public.
While he has been Editor in Chief the paper has eroded itself to become a joke.
It was corrupted a long time ago and now they try a PR exercise to pretend that Machray really cares. It was Alastair Machray who allowed his staff to become PR instruments for companies plying their trade on behalf of dodgy property developers.
It was Ali who allowed moonlighting journalists to run out out of control and  those that he made redundant are now working for PR companies that feed the pages of the Echo with trash.
http://liverpoolpreservationtrust.blogspot.co.uk/2014/10/is-tony-mcdonough-of-liverpool-echo-on.html


Just take as an example the continual PR about the awful Titanic Hotel and his mates at Signature Living.
http://liverpoolpreservationtrust.blogspot.co.uk/2014/08/joe-anderson-and-lawrence-kenwrights.html

We have a question to ask Ali...just how many people have you made redundant, and how can you sleep at night?

Tell Ali To bugger off, his paper is corrupt and then we might get a decent editor in who cares.

Posted by Liverpool Preservation Trust at Monday, June 01, 2015 No comments: Links to this post

Email ThisBlogThis!Share to TwitterShare to FacebookShare to Pinterest
Labels: Advertorial Daily Ghost Aritcles, Alastair Machray
Newer Posts Older Posts Home
Subscribe to: Posts (Atom)
"THESE OLD BUILDINGS DO NOT BELONG TO US ONLY;...THEY HAVE BELONGED TO OUR FOREFATHERS AND THEY WILL BELONG TO OUR DESCENDANTS, UNLESS WE PLAY THEM FALSE.