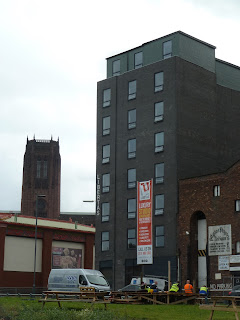 This surely has to be the carbuncle of the year built of engineering brick that usually as a rule should never rise out of the footings of a building,
it brings back everything that was bad about the 60's when bricks were still rationed. MAKE Architecture surely have to revise their name in the light of their achievements here. 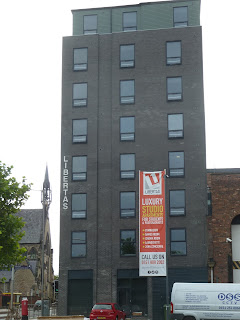 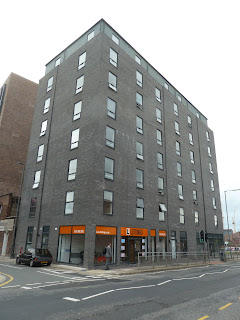 A puerile and putrid design made worse by its location in the Baltic Triangle that is becoming a student ghetto in Liverpool.
The washing maiden full of drying clothes seem to be have been made into a feature as every window seems to have one, probably because these shoe-


boxes have no facilities other than a bed.
A Georgian building was demolished for this monster and its setting in the shadow of Giles Gilbert Scott and next to some very old warehouses from when the River Mersey ran this way before reclamation in Victorian times and this has to be the work of a designers 10 year old son as it could never be that of an architect in my opinion. But here in Liverpool strange planners are at work.

No wonder UNESCO have imposed a moratorium on developments in Liverpool with our so-called planners blazing a trail into mediocrity.

The Liverpool City Planning Officer responsible for this is Elizabeth Blake........I hope you can sleep at night Ms Blake you should be ashamed of yourself.
You obviously have no pride in your city to allow this piece of trash to be built.

Posted by Liverpool Preservation Trust at Tuesday, September 29, 2015 No comments: Links to this post

Email ThisBlogThis!Share to TwitterShare to FacebookShare to Pinterest
Labels: Chris Griffiths, Civic Trust, Steve Corbett
Newer Posts Older Posts Home
Subscribe to: Posts (Atom)
"THESE OLD BUILDINGS DO NOT BELONG TO US ONLY;...THEY HAVE BELONGED TO OUR FOREFATHERS AND THEY WILL BELONG TO OUR DESCENDANTS, UNLESS WE PLAY THEM FALSE.