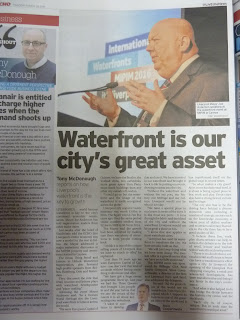 You couldn't make this up.
Only in Liverpool can a Mayor be such a bold faced property developers friend and get away with it. come back Derek Hatton all is forgiven. Oh he is already back.
Il Duce Anderson is the reason Liverpool is on the In Danger list and he now he, along with his Daily Poodles at the Liverpool Echo gets a soundbite that give the impression that he cares about it.
While allowing his minions such as Rob Burns to run riot over all the rules of planning based on good practice.

While Liverpool becomes the European Capital of Potholes he tells all his property developing friends at MIPIM the jolly junket that he will bend over backwards to help them.

And all reported by Peels poodle Tony McDonough and edited by Alastair Machray.
http://liverpoolpreservationtrust.blogspot.co.uk/2014/10/is-tony-mcdonough-of-liverpool-echo-on.html


Posted by Liverpool Preservation Trust at Thursday, March 24, 2016 No comments: Links to this post

Chancery House Destroyed By Liverpools Brain Dead Planners. Rob Burns Has A Lot To Answer For. 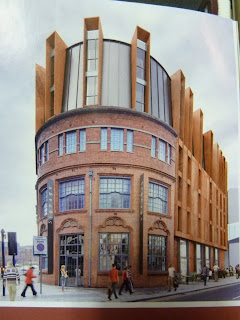 How can they do this to a listed building and then market it as a prime address.
This once proud building stands just by the 'paved Paradise and put up a parking lot' bus station at Liverpool One and opposite the new John Lewis. Just look what they are doing to a Grade II listed building.
Only in Liverpool would this be allowed.......and in a World Heritage Site.
This can only be described as an architectural abortion and Liverpools planners are to blame.
Joe "Must Go" Anderson dissolved the conservation office when he arrived in office on his 17% of the electorate vote and then set about building a property developers paradise.

Why would you do this unless you wanted to pave the way for his property developing mates?
Those "cosy" developers many of whom are enrolled in Downtown Liverpool In Business. (More on them to come).

Chancery House was a pretty good building that was listed Grade II for its architectural merits.
A solid red brick turreted folly dating from the 1870's, built when they used craftsmen who knew what they were doing. When people had pride in the city and its street scape.
Built of rich red terracotta brick banded by coloured brick.
It has romanesque style round headed windows. It was a noble building that does not deserve this disrespect. 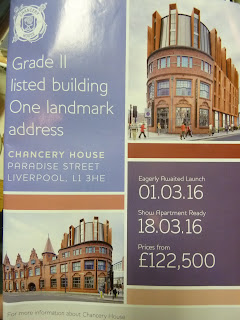 All this means nothing to Rob Burns who surely needs to be moved on. He knows nothing about heritage. He does not care one jot about Liverpools great architectural past.

Just look at the architectural mess that he is helping create. 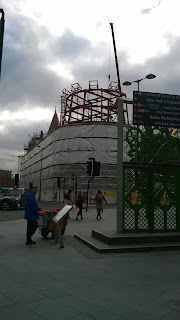 He is responsible for heritage and design while David Hughes has the title of the new Chief Planner,
This allows Rob Burns to ease all planning applications from Joe Andersons "Friends" through the planning process at breakneck pace with what seems a total disreguard for listed status.

Little wonder we are on the Unesco In Danger list.

Here you can see the setting against the old Henry Poole  gates erected as a momento of the past mistakes when they demolished the old Sailors Home.
http://liverpoolpreservationtrust.blogspot.co.uk/2011/08/henry-pooley-gates-return-can-we-have.html

The old conservation office was pretty bad but now being led by Rob Burns it is a disgrace.
And what are English Heritage doing about the problems here in Murkeyside.
Mr Burns you should go and hang your head in shame for what you are doing to our city.
Why cant they leave anything along?
Why destroy something that has taken a century to mature with for a load of apartments?
It can only be Miseryside.

Liverpool Preservation Trust: Tony McDonough Of The Liverpool Echo. Is He Peels Poodle?.

Bad Lighting, Bad Sound. Corrupted Ideas put together by their friendly PR companies and lapped up by the producers of Bay TV. http://www.baytvliverpool.com/

Can a public service be so out of touch?
It is like a group of middle aged men have been let out of the Athenaum Club for a weekend and come up with a load of ideas on how they think the public of Liverpool should be entertained .......only it is their idea, and these so called ideas are aided and abetted by property developers such as Neptune Developments wanting to convince the people of this great city that it is a good idea to dump a load more student shoeboxes on the population.
I recently watched a programme where David Lloyd of the the website/blog Seven Streets http://www.sevenstreets.com/ interviewed a director of Neptune over Lime Street plans.
It was such a bad interview that he may as well not have been there. (Can't you buy the services of Seven Streets as your very own PR machine?) So there's another conflict of interests. Isn't there?
Lets hope that you the public can see through the drivel of ill thought out topics that the untalented researchers at Bay TV employ to entertain you.
We feel so strongly about the lack of topic quality and the constant churning of repeated programmes that we are writing to Ofcom to complain.

David Ward
Posted by Liverpool Preservation Trust at Tuesday, March 08, 2016 No comments: Links to this post

Email ThisBlogThis!Share to TwitterShare to FacebookShare to Pinterest
Labels: Bay TV, Neptune Developments
Newer Posts Older Posts Home
Subscribe to: Posts (Atom)
"THESE OLD BUILDINGS DO NOT BELONG TO US ONLY;...THEY HAVE BELONGED TO OUR FOREFATHERS AND THEY WILL BELONG TO OUR DESCENDANTS, UNLESS WE PLAY THEM FALSE.