More shoddy reporting from the Liverpool Echo has led to some confusion about our recent objections to plans for The Historic India Buildings.

How can they keep getting things wrong and be so deluded. 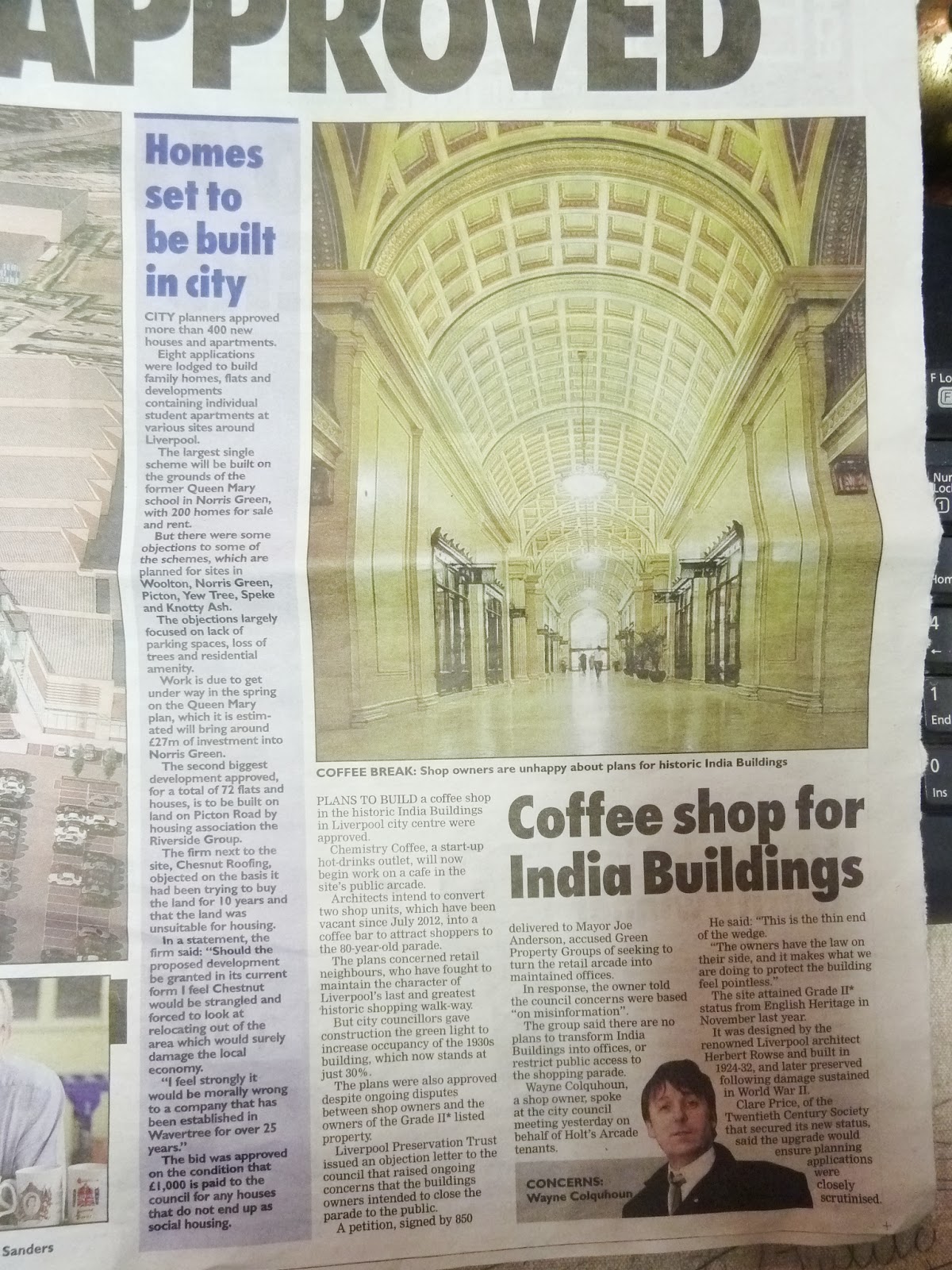 We supported the idea for a coffee shop within the historic arcade but objected to a meeting room in a vacant retail unit.

The landlords have wanted to put offices in the arcade for some time and we worry if this is the thin end of the wedge.

Green Property has recently invested substantial sums into the building but it still remains largely empty.

Wayne assisted with the idea for a coffee shop after the person who wanted to open it was told that the landlords would not wish to go ahead with the project giving extensive reasons such as smells and people loitering in the arcade.

The planning application 13L/2472 that was undemocratically passed by delegated powers at the planning office and Joe Anderson ignored a petition that was agreed to be passed on to the planners by the comments deadline.

The plans were to close two entrance doors to Water Street and fit a revolving door to the remaining thus restricting access to an arcade that was built over Chorley Street. The landlords now say they do not wish to close off the public access.

The plans then morphed into a new set of plans with a meeting room attached to the coffee shop although the applicant plans were named as Chemistry coffee they were in fact submitted by the landlords and Wayne as a concerned shopkeeper went to address the planning committee. It was clear that as he helped to constitute the idea for a café that he did not object to Chemistry opening a shop but both he and other shopkeepers agreed that a meeting room was in fact wrong for the arcade as the retailers needed help and assistance.

It was always going to be passed by the planning committee poodles who do resemble at best nodding dogs, they never disagree with a planning department that is corrupted, so what’s the point in having them.

Can it be as bad as Doreen Jones and David Irving’s poodles.

The journalist who reported on the planning committee failed to understand this aspect of his speech and the usual bad editing has led to half a story.

One thing is certain without the controversy and the publics concern for the beautiful Holts Arcade the announcement of a coffee shop opening would not have been an event.

So it has got India Buildings back in the spotlight.

We wish Ian of Chemistry Coffee success in his venture in the magnificent Holts Arcade of India Buildings.

Posted by Liverpool Preservation Trust at Thursday, January 30, 2014 No comments: Links to this post

Liverpool Preservation Trust: Titanic Girl-Liverpool Dances On The Graves Of The Dead.

Life is so difficult dealing with Herr Director of planning operations, our overlord, Joe Anderson. Nothing highlights his disregard for Liverpool’s Heritage, than the recent ignoring of a hand delivered petition regarding India Buildings.

India Buildings is in the World Heritage Site.
It is he who has got Liverpool stuffed onto the UNESCO World Heritage In Danger List.
A petition, that a thousand of Liverpool’s citizens signed, was hand delivered to the Municipal Buildings where he has his office. 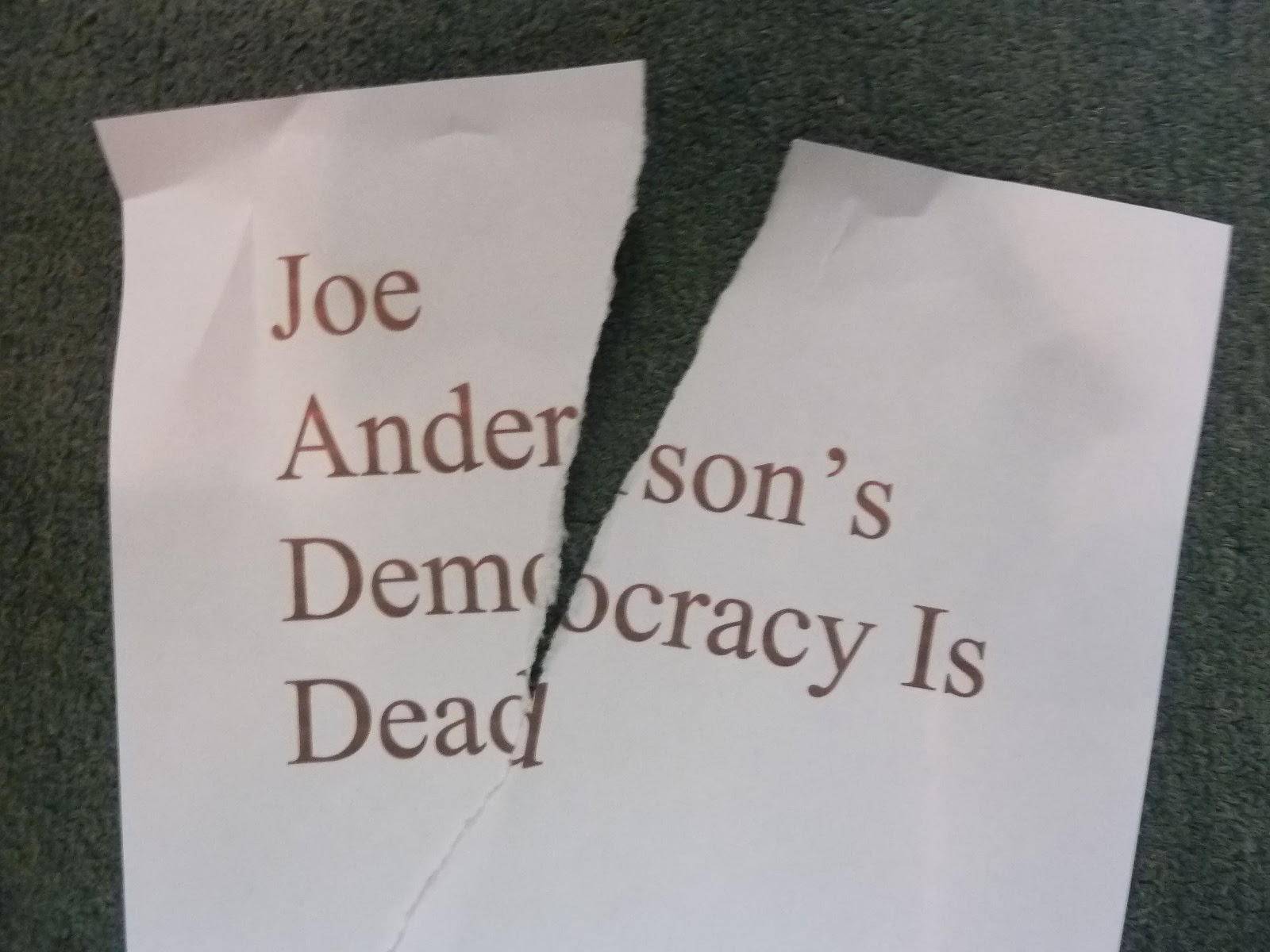 It was made clear that the planning application to hinder the entrance of the public to Holts Arcade had a deadline of 16th December and there was plenty of time from the 11th of December, and it was agreed with his representative that this petition would be passed internally to the planning officer, Elizebeth Blake. Liz Blake is an arrogant law unto herself in our opinion. I wont be able to print what one of LPT said about her.

Its hard enough trying to keep tab of the planners at the best of times but leading up to Xmas is exceptionally difficult.

India Buildings had been upgraded from Grade II to Grade II* by English Heritage after an application by the c20 society, such is its architectural significance.
http://liverpoolpreservationtrust.blogspot.co.uk/2013/11/a-star-for-india-buildings-english.html

The original planning application 13L/2472 had been withdrawn because of the listing upgrade.
So our Dictator, who was voted in by 16% of the electorate of Liverpool has a mandate to run the planning department how he wishes.

He can push his influence in where he likes.

This will be very beneficial to his friends at Downtown Liverpool, whose members seem to get preferential treatment by the planners.

Liz Blake dealing with the application had failed to notify shopkeepers of Holts Arcade and any tenant of India Buildings about an application to restrict access and alter the character of this majestic edifice that is loved by the people of Liverpool. What would be the state of play when you realise your neighbour could be building a 10 storey block of flats and you get to know about it when the JCB's arrive to dig the foundations.
The 1000 name petition was gathered with ease, such was their concern of the public about plans by Green Property, who last year told the tenants that they wanted to close one of the doors off, thus breaking an ancient right of way and converting the shops to offices. http://liverpoolpreservationtrust.blogspot.co.uk/2012/12/green-property-issue-statement-on-india.html

Holts Arcade is the Burlington Arcade of the north its travertine lined arcade with its bronze fixtures make it unique.

This is of great concern to, not only the people of Liverpool but all who care for World Heritage.

English Heritage asked for the original application 13L/2472 to be withdrawn. http://liverpoolpreservationtrust.blogspot.co.uk/2013/11/plans-to-alter-india-buildings.html

So the applicant with the help of the planners amend it splitting the same application into thirds and resubmit two thirds of it again. One third in some coded revised plan that you would need a degree in navigation to find on the council website. Of course that is if you are looking because no letters were sent out to the public, so you wouldn't know about it, unless you stumbled on the rag-arsed piece of paper that some council operative put on the lampost just as we had a blizzard and it was unreadable.

Lets make no mistake here, in our opinion, these planners are not looking after the interests of Liverpudlians, they work with the developers to get plans passed. They are ignorant to the needs of the public. They have two functions . To accept an application and to pass an application.
Liz Blake is particularly ignorant in our opinion. But she is not unique at the planning department.

Just who gives them the authority to abuse the power they possess, to disrespect the public who pay their wages. And all the while they are faceless and answer to themselves.

Democracy does not matter. This suits developers especially the ones such as the fraudsters who were given St Andrews Church, which is Grade I for a quid.

Dealing with Liverpool's planning managers, in general, in our opinion, is like dealing with sharks . They have the law behind them. And unlimited legal advice.

But that does not make it llegal what they do. Largely they go unchallenged in city where less than 30% turn out to vote for a Mayor.

We have a great deal of experience dealing with the planners and we can say the we always find them well mannered. And all the time when they are well mannered they are kicking you in the balls.

It is similar to playing cards with a cheat, who has another deck under the table.

And you say to them there are five aces on the table and the arrogant shyster says “Yes and they are all mine” and you cant do nothing because they own the joint.

They, as a benefit to the developers are hiding cards and, well basicly they are cheats.

It does not matter if they are within the law. They cheat.

This is why Liverpool’s heritage is in such a bad state.

And the Mayor encourages it.

This is why Liverpool is turning into Tesco-pool and the character of the city is being eroded.

This is why India Buildings has gone from 75% occupancy level to 20% since Green Property have owned it.
They at the planning dept with no cohesive strategy allowed to be built block after block of sterile office space in the Old Hall street district. They are even calling that area the business district now. To the detriment of Water Street which was built as the business district. They now have to give out 5 year rent free deals to fill this space in Old hall Street. Thus the mass migration from Liverpool’s historic structures such as the Port of Liverpool, The Liver Buildings and Martins Bank Buildings.

This has been bad for India Buildings the owners did not want to compete and let the tenants go.

So without our work in protecting this space in helping to upgrade its listing it would not be a public space. Without us alerting the public it would be closed.
So as concerned citizens we get together a petition deliver it to the Mayor.
We play the process honestly, even though we know its corrupt and stacked in favour of arrogant planning managers.

Joe Anderson failed to deliver the petition.
The planning department is only three doors away from his office and the plans were passed by delegated powers in a sleight of hand by Liz Blake that looks more like dodgy dealing than a democratic process.
Did Joe Anderson with hold the petition on purpose?

This is outrageous at no time was it spelt out by Blake that delegated powers were to be used.

To think we fought two world wars to be able to have democracy and Andersons storm-troopers in the planning department, in their brown shirts, run roughshod all over it.

All those people giving their time up for democracy and Herr Fuhrer Joe Anderson has removed the democratic process.

It is an abuse of power sanctioned by the Mayor.

What a disgrace his office has proved to be.

We now have now made an official complaint. To Herr Anderson the Mayor.

We will let you know what he says.
Posted by Liverpool Preservation Trust at Monday, January 06, 2014 No comments: Links to this post

Email ThisBlogThis!Share to TwitterShare to FacebookShare to Pinterest
Labels: India Building., Joe Anderson
Newer Posts Older Posts Home
Subscribe to: Posts (Atom)
"THESE OLD BUILDINGS DO NOT BELONG TO US ONLY;...THEY HAVE BELONGED TO OUR FOREFATHERS AND THEY WILL BELONG TO OUR DESCENDANTS, UNLESS WE PLAY THEM FALSE.