Everton Stadium to be Built on Bramley-Moore Dock-What A Great Idea.


What a great idea is to use Bramley-Moore Dock as a stadium for Liverpools other team.
As long as it does not touch the Dock Wall, that was built by Napoleonic prisoners of war.
A new stadium would be low rise and wont bring us into trouble with the United Nations. UNESCO.
Ths is the scale of development that we at The LPT have been asking for in the WHS for over a decade now.
There obviously won't be as much traffic on match days as there is in Anfield.
Everton, A small club, needs room to grow.
So this low scale development will regenerate the area. Everton will benefit it seems a win win.
This nonsense about high rise glass shoeboxes on our historic docks has to stop.
We need low rise buildings that respect the waterfront. This will do.
Who is driving this forward. Is it fat Joe the Evertonian or Lyndsay the liar of Peel
BUT, Didn't we go through all this a decade ago with Everton's proposed move to Kings Dock.
And what have we ended up with.......a car park and a block of aestheticly unpleasant white plassy flats with bits falling off them that look like they wont last the decade never mind the century.

So what would happen to Gladys Street and the local economy?
Everton's move will destroy it of course.
Do Evertonians want to move, maybe some do, maybe some don't.
Every Evertonion will (bore)tell you about how it was one of the first stadiums in the country and how the 1966 World Cup was staged there and all the other battles that have been ought there, and we dont just mean for the meat pies.
So why do they want to move?  MONEY of course so they can build a Tesco maybe?

We are aware that there is a listing application being submitted to Historic England for Goodison to be listed as Grade I.

There are some interesting times ahead.

So Lets get Goodison Listed.

Now thats a great idea. List it so it is preserved in history. 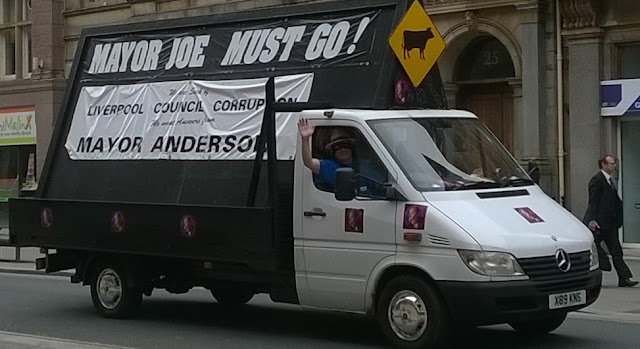 Does Liverpool have a Corrupt Planning Department?
This is a question that we have been asking for years.
Now the Echo are publishing evidence of (alleged) corruption.
Just imagine all the deals that have been done with sweaty handshakes.
Btwen The Planners and  Joe Anderson's "Cosy" Developer mates.
Shouldn't there be a widespread investigation into all planning applications that were ....helped along?
There are rumours of developers carrying suitcases full of cash to bribe council officials.
http://liverpoolpreservationtrust.blogspot.co.uk/2014/08/joe-anderson-and-lawrence-kenwrights.html 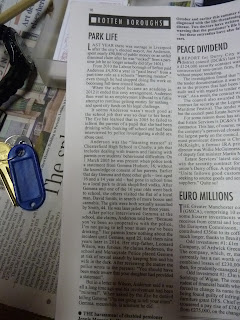 What is The Chief Executive of Liverpool, Ged Fitzgerald doing. Well he was Chief Executive of Rotheram while the Child abuse scandal was happening.
So we don't have much faith for him getting to the bottom of this.
http://liverpoolpreservationtrust.blogspot.co.uk/2010/06/frank-mckenna-suckles-at-breast-of-joe.html
Someone need to look into this
http://liverpoolpreservationtrust.blogspot.co.uk/2016/03/chancery-house-destroyed-by-liverpools.html

Posted by Liverpool Preservation Trust at Tuesday, March 28, 2017 No comments: Links to this post 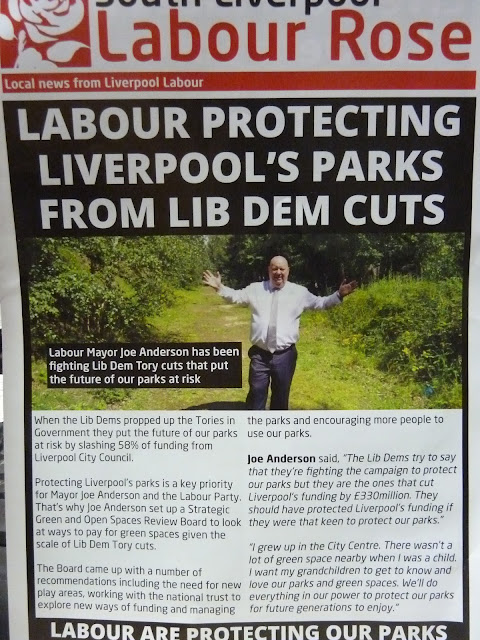 What a bunch of Liars.

Joe and Co have now sunk to a new low with this one.
In order to justify Joe Anderson's mates at Redrow and various other 'cosy' developers who are hanging on his tail, being given a free run. He and his £90,000 a year PR have really made this one up, blaming Richard Kemp, or is it Warren Bradley.....remember him, for the need to build on Liverpool Parkland.
What a big fat Lie. Labour are protecting Our Parks the liars who wrote it say.
And in the meantime Alastair Houghton and Co at The Daily Council, The Oldham Echo just carry on with press release after press release converted into page space for Joe Anderson in the Echo.
All this in a publication that goes out free to Liverpool Letter Boxes. paid for by you.
And all this while the whinging Anderson blames the Tory's for cutting funding, he wastes money on this tripe.
Only in Murkeyside could this sort of stuff happen.
Posted by Liverpool Preservation Trust at Thursday, March 16, 2017 No comments: Links to this post

Email ThisBlogThis!Share to TwitterShare to FacebookShare to Pinterest
Labels: Joe Anderson, Mayor Joe Anderson
Newer Posts Older Posts Home
Subscribe to: Posts (Atom)
"THESE OLD BUILDINGS DO NOT BELONG TO US ONLY;...THEY HAVE BELONGED TO OUR FOREFATHERS AND THEY WILL BELONG TO OUR DESCENDANTS, UNLESS WE PLAY THEM FALSE.