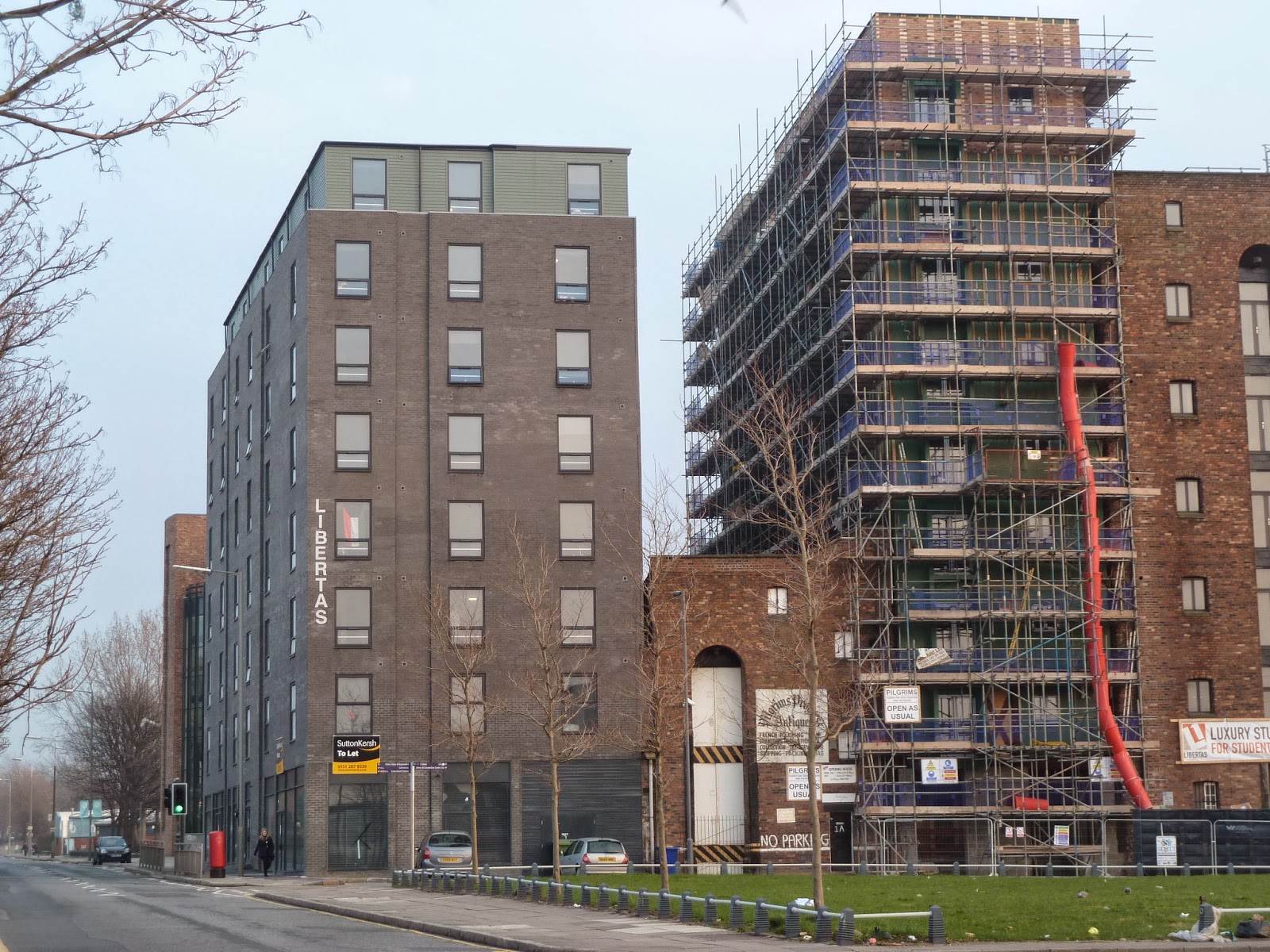 More importantly. Why is the city allowing such an architectural mess to develop in the Baltic Triangle. While the mouths at Baltic Creative “cover up” this mess by spooning the good news that this is a vibrant area we have to look at the architectural abortion that is Bridgewater Street. Here this end block called Libertas really is taking a Liberty or is it the Micheal?
It has to be the worst piece of architecture ever built.
There are no words other than a Carbuncle to describe it.
http://liverpoolpreservationtrust.blogspot.co.uk/2011/08/another-hacking-scandal-right-in-front.html

Is Grant Butterworth Liverpool's recently appointed planning manager…....hand picked by Joe “Il Duce” Anderson, really doing his job or just allowing anyone to build anything?
There are good things happening. But Baltic is still a dive. It was a blank canvass so why throw a load of paint on it. There was a big fuss when a small artisan bakery opened up there. Yet not a mention of Antonios Bakery which supplies half the city centre. How long before they will have to close and move to a cheaper are and the bakehouse is flattened to make way for yet more flats? 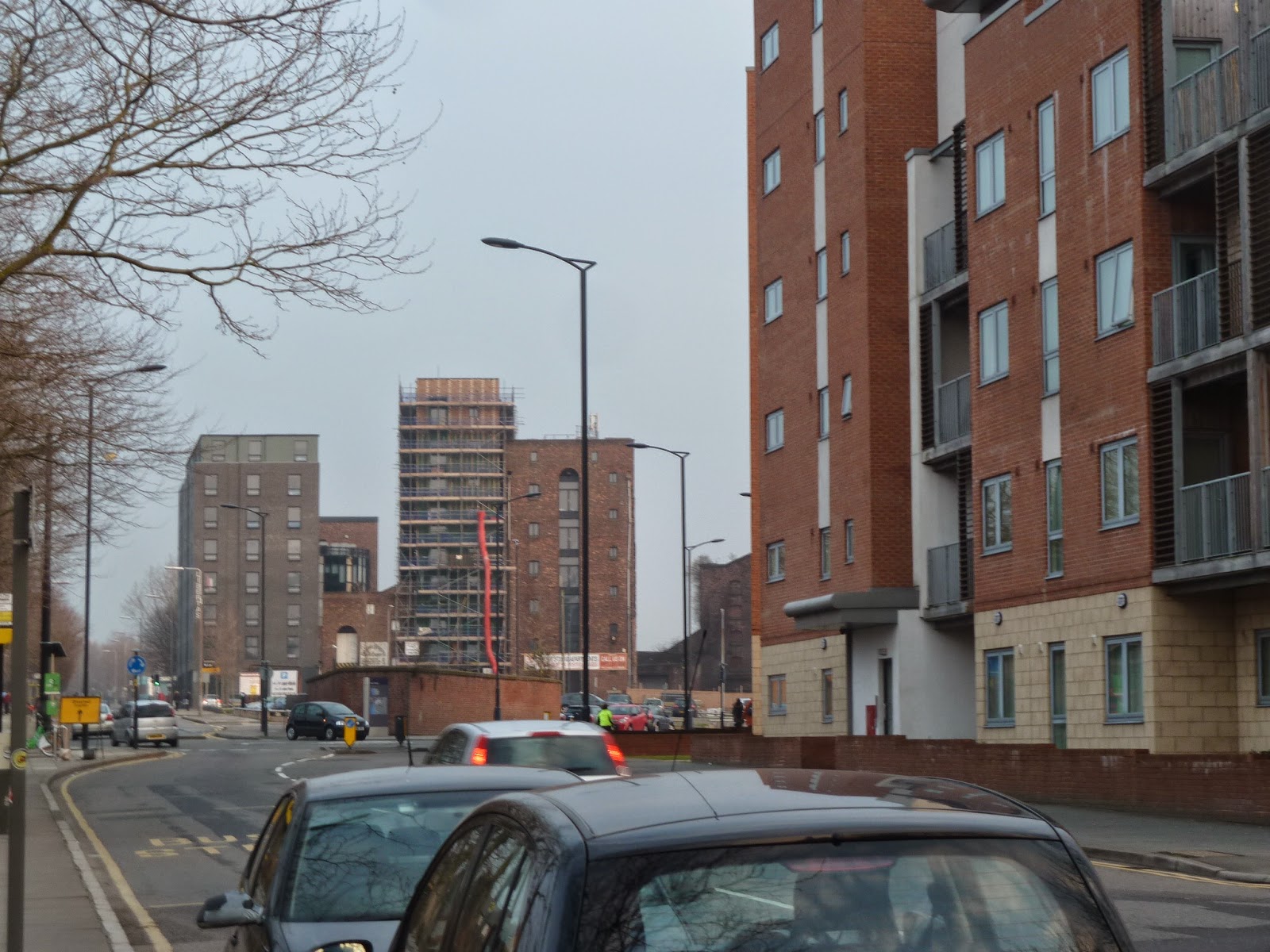 The new commerces that are claimed are happening seem to be made up of massive blocks of student apartments.
These apartments are like shoe-boxes.
It would be like living in a Formula One hotel room.
Coincidentally the horrid architecture of the Formula One (the cheapest hotel chain in France) and the Ibis Hotel, overlooking the Albert Dock are now starting to look like the best quality in the area, against the sad blocks that are being crammed into every piece of derelict land left over from Lady Doreen and Sir Trevor Jones business ventures with Windsor Developments Clever Trevor and Dot who teamed up with the Windsor con men but ultimately this led to the land repossessed by Barclay's Bank who passed it on to Carbuncle Builders Neptune Developments.
http://liverpoolpreservationtrust.blogspot.co.uk/2010/09/trevor-jones-and-hole-in-ground.html
Is it Barclay's Bank under the offshore umbrella who are doing the developments in that area?
http://liverpoolpreservationtrust.blogspot.co.uk/2014/06/save-heaps-rice-mill-its-too-good-to-be.html

These developments that will possibly make Heaps Rice Mill listing as Grade II a waste of time because it will now be swallowed up by the slums of the future that are being built in the Baltic Triangle by Neptune and Co? 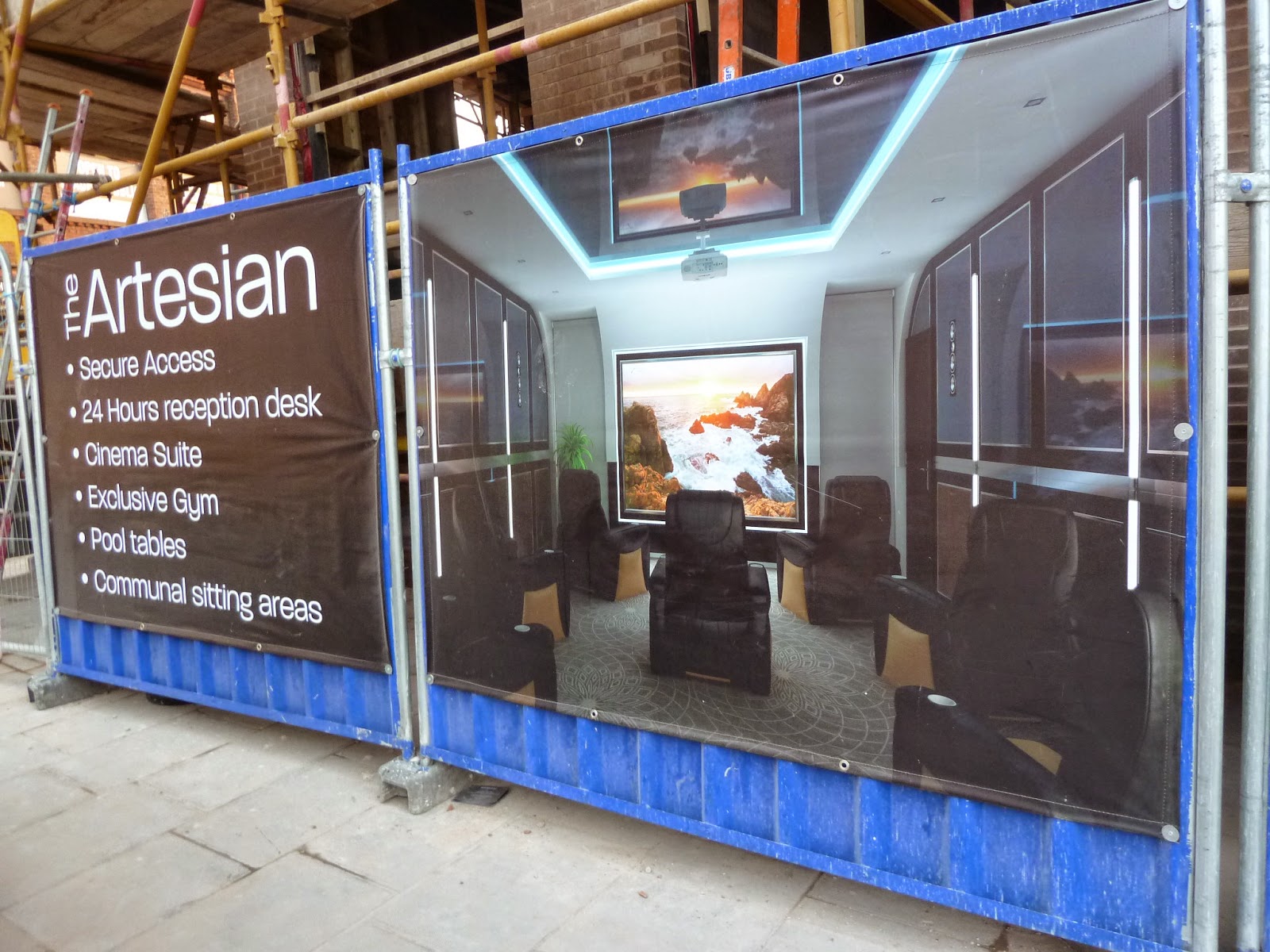 And if you listen to, or are taken in by the brazen press releases of that said Baltic Creative, that are lapped up by the local hacks, looking for any good news with which to swindle what's left of the declining readership.
Or what is left of the hacks that have not been made redundant by Trinity “Smoking” Mirrors very own grim reaper Alastair Machray. Peter Elson the shipping correspondent gets made redundant in the year that he helped bring the Three Cunard ships into Liverpool. Theres Thanks for you,
How can you sleep at night Mr Machray?

J'accuse Baltic Creative for spreading themselves over the area, pretending everything is fine and rosy, on purpose. Being Property developers Molls. Clouding the issue, making everything look rosy, giving people tinted spectacles.
They are a CIC with charitable status without being accountable as a charity is. 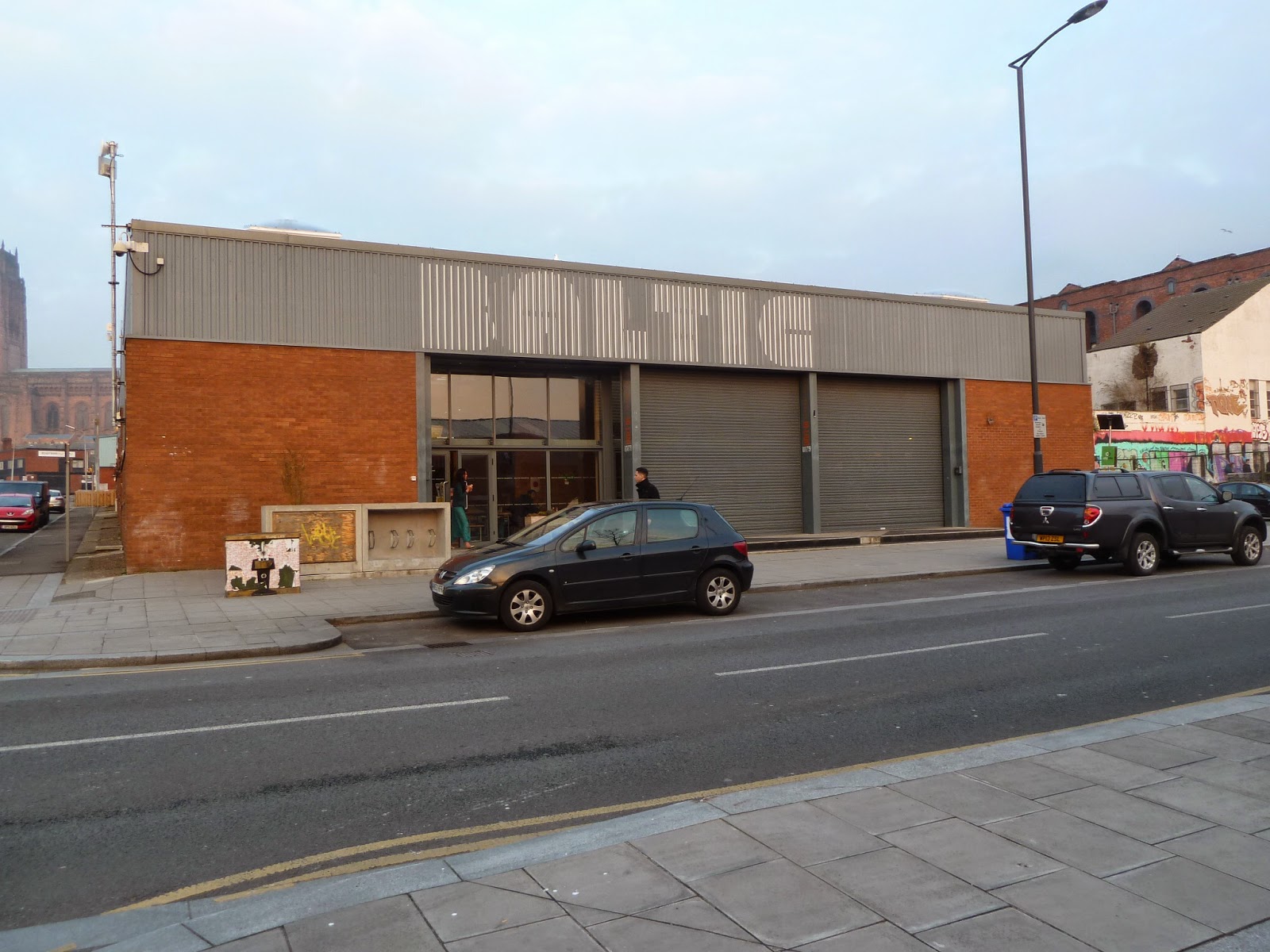 They are funded for sure, we wont go into their finances here.
And then there are the feeders such as grant catchers Engage Liverpool who slither themselves around any where, to anyone will give them a grant.
Gerry Proctors credentials in setting himself up as a planning adviser (sic) in the Baltic Triangle, along with several other areas are simply to make money in our opinion.
Altruism is in short supply where grants are available, in our opinion.
Engage have been funded by Neptune Developments and at every opportunity Proctor will PR for Neptune.
He has also done the same promoting for Peel Holdings and  Liverpool Waters, yes the proposed development that has got Liverpool on the World Heritage In Danger List.
Being funded by the City Council and lottery funding, we can state quite categorically that we do not trust the motive of this sinister organisation Engage Liverpool working behind the scenes.

So the place known as the Baltic Triangle is now being redeveloped and Joe Anderson says it is thriving.
All we see is a load of blocks of shoe boxes, and a new MacDonald's, oh, and a new KFC.
While Cains Brewery has been used as a cannabis farm.
http://liverpoolpreservationtrust.blogspot.co.uk/2013/05/cains-con-merchants-selling-out-our.html

But you don't have to believe us if you don't want to.
You can believe Baltic Creative and the PR rubbish that is spooned by Jon Egan and his mate Mo of Archetype Studios or is it Aurora Media or October Communications who gives a jack, who also PR for Neptune Developments and Cains Brewery owners the Dusanj Brothers, that sacked all their workers,
Oh and they were Joe Anderson's PR firm for his Mayoral campaign, they have also been the city councils PR at various times.
http://liverpoolpreservationtrust.blogspot.co.uk/2011/06/liverpool-daily-post-what-price-free.html

Its circles again it should be renamed Baltic Circle not Triangle, such is the incestuous relationships being played out before your very eyes and lapped up and spun with a shovel by the Oldham Echo.


Lets see what it looks like when its finished shall we.
One thing is for certain there is some creative accounting going on there.

Save The Futurist-Private Eye Slam Neptune Developments and City Council For Proposing An Eyesore. 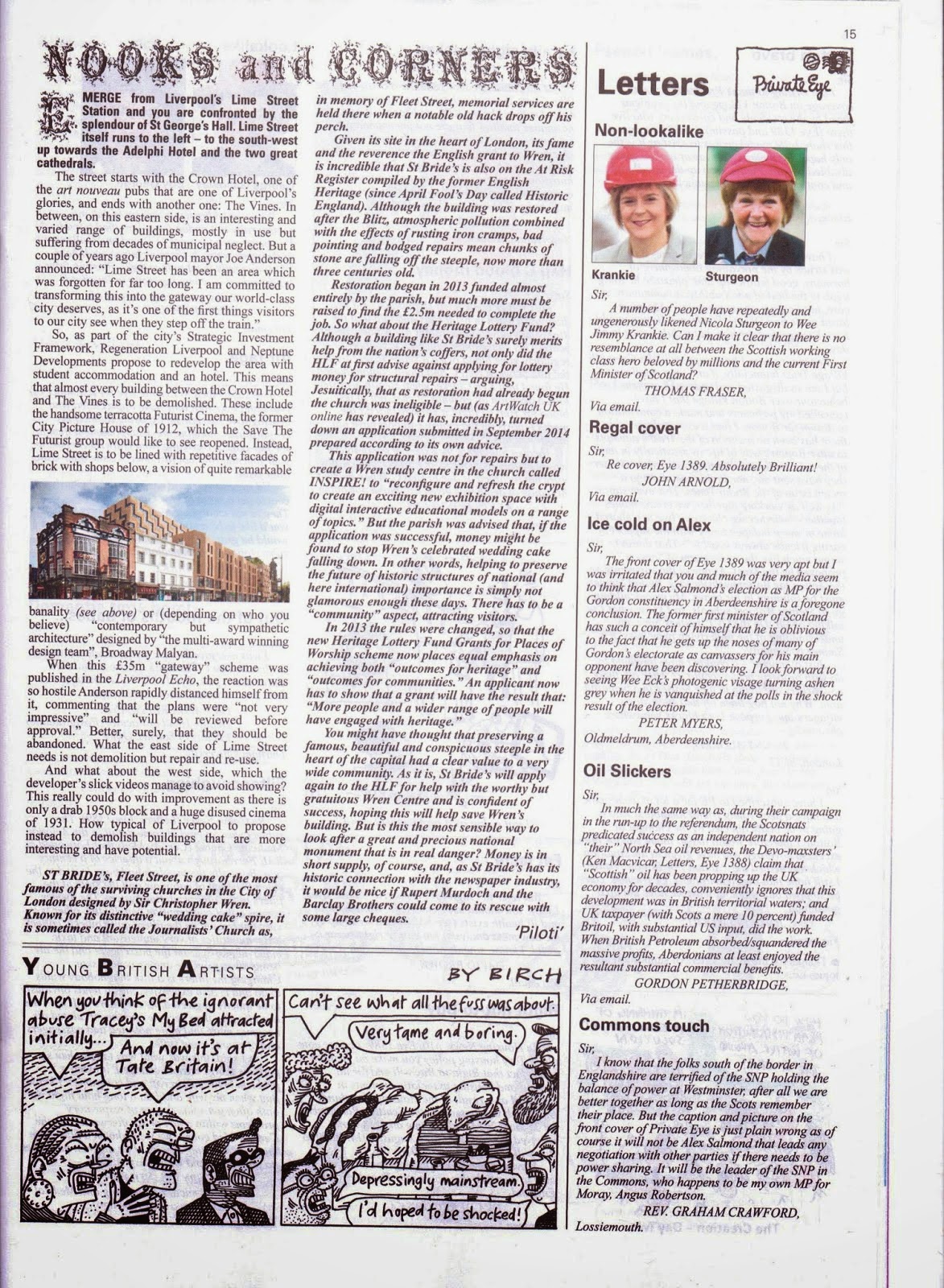 Sometimes You need a look from out of the city to realise just how crass a proposal is. Private Eye is good at that. Maybe then it wakes up the local planners and the dictator of a Mayor Mr Anderson to realise that you cant carry on vandalising your heritage at the behest of the city council's  property developing mates. This is a cosy relationship. One of Neptunes Directors used to work for the City Council planning department. But the real question is how can a city that is a World Heritage City even consider allowing such a bad proposal in the first place? We all know in the city that this is a ugly scheme. Maybe the Chubby version of Derek Hatton can now wake up  and use his dictatorship to send his mates packing right back to the drawing board.
Don't forget the developers and their architects are the same ones that built the Three Black Coffins on Mann Island that scar our world Heritage blight forever.
(click on pic to expand)
Posted by Liverpool Preservation Trust at Wednesday, April 15, 2015 No comments:

Paul Brandt Barrister and Druggie-Dont Bring Shame On The City. 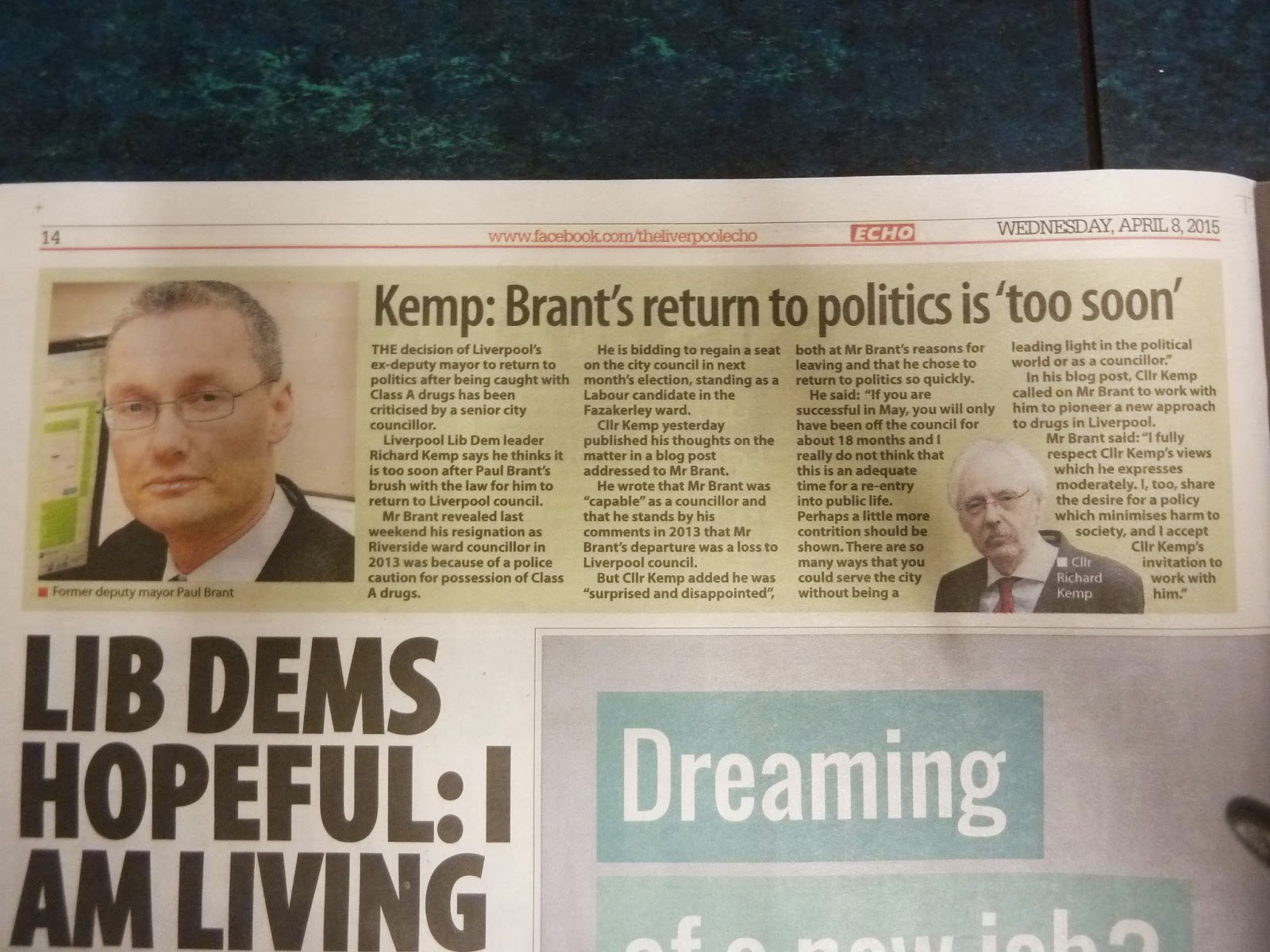 The revelation that the reason Deputy Mayor and mate of Joe Anderson resigned because he was caught in possession of class A drugs is hard to believe. Even harder to believe is that he is planning to come back into politics as a councillor in Fazakerly Ward.
Lets hope the people there can see right through the facade of respectability that his office as a Barrister has given him.
Whats more should the legal fraternity shun him also?
Or will he be there defending smack heads for a living now.
Joe Anderson Mayor of Liverpool you are a disgrace to allow this man to stand as a Labour Councillor.
It shows how lacking in moral fibre the city's fat cat mayor has plunged the city.
Disgraceful how the ex Deputy Mayor Paul Brandt can even consider shaming our city.
What other city has a druggie as a councilor?
Good on Richard Kemp for highlighting it.
MR BRANDT YOU SHOULD HANG YOUR HEAD IN SHAME AND GO AWAY AND HIDE IN YOUR OFFICE BECAUSE  YOU SHOULD NOT BE IN PUBLIC OFFICE.
Posted by Liverpool Preservation Trust at Wednesday, April 08, 2015 No comments:

Email ThisBlogThis!Share to TwitterShare to FacebookShare to Pinterest
Labels: Joe Anderson
Newer Posts Older Posts Home
Subscribe to: Posts (Atom)
"THESE OLD BUILDINGS DO NOT BELONG TO US ONLY;...THEY HAVE BELONGED TO OUR FOREFATHERS AND THEY WILL BELONG TO OUR DESCENDANTS, UNLESS WE PLAY THEM FALSE.