English Heritage List The Wrong Building And Do The Former Midland Bank On Dale Street Instead.

You know how long and hard we have fought to get buildings listed. 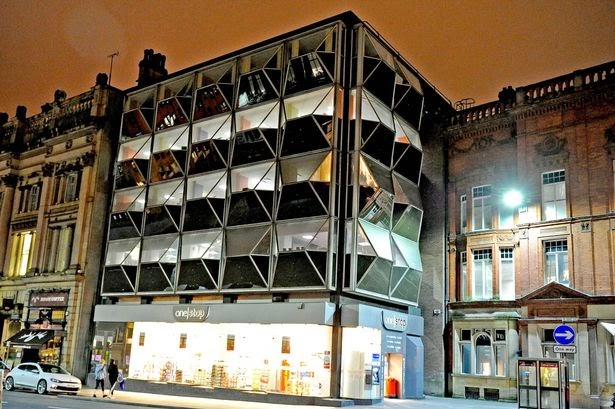 We have had some knock backs by English Heritage only now to see those much loved buildings demolished and gone forever.
Then the goon squad come to town and list a giant egg crate on Dale Street right next to the town hall.

You have to despair its a One Stop Shop.
Is there a worse looking building that sat uncomfortably in its setting than this eyesore?
They are even claiming it resembles Oriel Chambers.
Dont know what sort of rose tinted glasses the clown who listed it was wearing but they need cleaning.
There are rubbish sixties blocks all over the city that they could have listed and they have to list this one next to the Town Hall, and now we have to put up with it forever.
Bradshaw, Rowse Harker has its origins in the practice of Herbert J Rowse, who was one of the most influential architects of the inter-war period.

English Heritage said: “The Former Midland Bank showcases the firm’s experimental approach to sculptural form and design evident in their later work.”
Herbert Rowse must be turning in his grave

English Heritage said: “Office buildings shape the face of our cities and today’s listings have ensured that this area of architectural achievement is recognised for future generations.
“Listing helps the nation acknowledge and understand its shared history. It marks and celebrates a building’s special architectural and historic interest, and also brings it under the consideration of the planning system, so that some thought will be given to its future when change is underway.”


We chipped in to save the other side of the street from becoming a bookies.
Sometimes you wonder why you bother.

English Heritage in the North’s Nick Bridgland, said: “The startlingly modern frontage and oversized windows in mirrored-glass echo one of Liverpool’s most famous buildings, Peter Ellis’ Oriel Chambers, built in 1864 and Grade I listed, and make up a key part of the character of Liverpool’s commercial area.”
Constructed to the designs of local architects Bradshaw, Rowse and Harker, English Heritage said the former Midland is a key example of a post-war bank, unusually employing a high-quality Modernist design – a form of late 1960s pop architecture, which brought “fun and diversity” to the street.
http://list.english-heritage.org.uk/resultsingle.aspx?uid=1419347
Fun and Diversity? What a clown.

Posted by Liverpool Preservation Trust at Thursday, January 29, 2015 No comments: Links to this post

Email ThisBlogThis!Share to TwitterShare to FacebookShare to Pinterest
Labels: English Heritage
Newer Posts Older Posts Home
Subscribe to: Posts (Atom)
"THESE OLD BUILDINGS DO NOT BELONG TO US ONLY;...THEY HAVE BELONGED TO OUR FOREFATHERS AND THEY WILL BELONG TO OUR DESCENDANTS, UNLESS WE PLAY THEM FALSE.