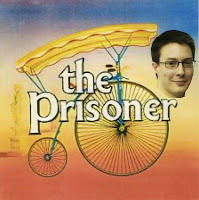 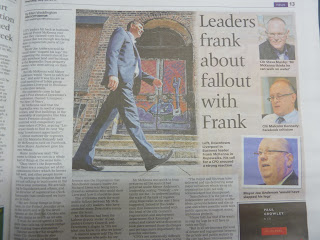 You have to be worried about the level of publicity for a lobby group when it reaches the proportions that it has here on Murkeyside. Trinity "Smoking" Mirror Group seem to be a law onto themselves, out of control in fact, printing what they like .
Last week a row broke out, or was it manufactured?
It was relating to comments by Frank McKenna and was duly put on the front page of the Daily Ghost. The row centred around the Ropewalks area and was predominantly about how Frank McSpiv thinks 300 properties should be CPO'd by the council.
Or was it a guise for Iliad, one of his first members, and the vandals of 6 Sir Thomas Street,to be allowed to walk all over the ropewalks area. It did not say that of course but was disguised in a manner that was slight of hand in our opinion.
We are hearing reports that the person who writes the Ropewalks blog resigned.
Do Iliad run this website?
Was he pressurised out by Iliad after he made comments on Facebook?
We wrote with concern last week. http://liverpoolpreservationtrust.blogspot.co.uk/2013/07/liverpool-daily-post-frank-mckennas.html

But it does not stop there this week there is another page this time with the Mayor and Malcolm Kennedy playing political manoeuvres, against McKenna, when we all know that there is a direct link with Frank McKenna and the Council.
Downtown Liverpool In Business has a slogan.
Its not what, you know. Its who we know.
Larry Neild when working for The Ghost received an award for his journalism! From McKenna and duly got up and gave a 20 minute acceptance speech.
So why is there so much space given over to McSpiv and his group from The Editor in Chief Trinity Mirror Merseyside by Alastair Machray.?
Joe Anderson has often spoke at Downtown Liverpool get togethers, but now when he is geting a spotlight on his interactions he now wishes to PR a distance from McKenna.
Guest speaker one minute not talking the next, come on, That may kid the masses but not us.

Meanwhile David Bartlett The Prisoner of Port Merrion on Mersey,  Come in No 6,  has been promoted to content editor.
It looks to us that the continuation of the relationship between Downtown Liverpool and Oldham Hall Street will continue.

Peel Holdings are a member of Downtown and recently David Bartlett was advised of an expose in Private Eye where it was reported that Stella Shiu was made bankrupt as recently as two years ago............not a menttion by Bartlett in the pages. http://liverpoolpreservationtrust.blogspot.co.uk/2013/05/stella-shiu-exposed-in-private-eye.html
Margaret Hodge calls Peel tax dodgers...not a mention. Jack Straw give Peel a pasting in the House of Commons over devious planning practices.......no not a dicky bird.

Posted by Liverpool Preservation Trust at Tuesday, July 30, 2013 No comments:

Tom Murphy-Dumping Bad Sculpture On The Streets Of Liverpool. 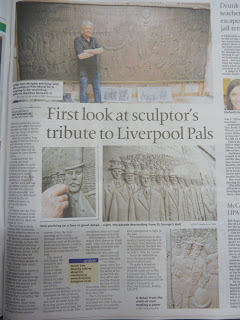 ﻿Commissioned by people who will never understand form. They are the ones that have let Tom Murphy loose on a city, that did, have a tradition of fine sculpture.

Liverpool, at the turn of the last century, had the Art Sheds where the likes of Charles Allen worked. And now we have Tom Murphy’s shed.

Murphy is a best friend with David Charters at the Daily Ghost and he has continually publicised him over the years, feeding the artistically ill educated patrons with nonsense. Peter Elson interviewed him as the Big Interview for The Ghost.
An advertorial.
Laura Davis who is a good egg, writes this article.
Here in this weeks Daily or Weekly Ghost they are touting for him to get another job. It looks the worst one he has done.

This panel illustrated looks like it has been drawn by a 10-year-old snotty nosed kid not a competent crafts person, that Murphy is not.
Just look at Ken Dodd with a kebab at Lime Street Station. http://liverpoolpreservationtrust.blogspot.co.uk/2009/07/liverpool-european-capital-ofbad.html
The Bessie Braddock looks like a Sack with a head on it.
The Roily Polly’s outside Littlewoods are badly modelled even for chubby blokes who are not really members of the Wombles, and Johnny Walker at The Pier Head looks like he has had one whisky too many.
The writer declares that any sculpture that Spud Murphy likes to challenge him on he will make a better job of.

Here's some we did earlier.
http://liverpoolpreservationtrust.blogspot.co.uk/2010/11/tom-murphy-dumping-bad-sculpture-on.html
We have to be very careful about the legacy of the boom era that has seen us trash the World Heritage Site to a shadow of its former glory.

4. Notes the information provided by the State Party that the Secretary of State for Communities and Local Government decided not to call in the Liverpool Waters development for consideration at the national level, and that the Liverpool City Council had granted consent to the application submitted by the developer;

5. Reiterates its serious concern also notes over the potential threat of the proposed Liverpool Waters development on the Outstanding Universal Value of the property, and that the implementation of the development, as currently planned, would irreversibly damage the attributes and conditions of integrity that warranted inscription, and could lead to the potential deletion of the property from the World Heritage List;

6. Therefore, strongly urges the State Party to reconsider the proposed development to ensure the continued coherence of the architectural and town-planning attributes, and the continued safeguarding of the Outstanding Universal Value of the property including the conditions of authenticity and integrity;


Not a mention in the local press about this as expected, the bare minimum.

Posted by Liverpool Preservation Trust at Wednesday, July 24, 2013 No comments:

Liverpool to Lose Two More Listed Buildings. 86-90 Duke Street. How Many More Can We Lose?.

46 listed buildings were destroyed during the Fib Dems.

What is being done to protect us from poor development when the people doing the checking are in with the developers even giving them grants?
Here is an email sent to the planning department regarding
Site Address 86-90 Duke Street, 71 Henry Street and 14 Suffolk Street Liverpool L1 5AA
http://liverpoolpreservationtrust.blogspot.co.uk/2013/07/liverpool-daily-post-frank-mckennas.html

No wonder developers are crawling over this area.


This is opposite The Monro Public House.
PUB QUIZ QUESTION
The one time Manager of the Monro was  a famous local politition.  Who was He?
Answers on a postcode please and address it to the Mayors Office.


Letter to the planning office


We wish to object quite strongly to the fact that two listed buildings in the Duke Street area are to be lost.

We may not be able to get someone to attend the meeting but regarding the application we would wish that our comments be read out at the planning meeting.

We consider this application to be flawed.

Posted by Liverpool Preservation Trust at Monday, July 22, 2013 No comments:


Yesterdays front page of the now weekly Daily Ghost (dead man walking will someone put it out of our misery) carried another advertorial for Frank McSpivs Downtown Liverpool in Joe Anderson’s Pocket, this time the front cover. http://www.liverpooldailypost.co.uk/liverpool-news/regional-news/2013/07/18/buy-up-ropewalks-buildings-to-speed-regeneration-99623-33623418/
Now what on the surface of it proclaims to be a harmless bit of local gossip is never that simple in the corrupted regime that is Oldham Hall Street, the local headquarters of Trinity “Smoking” Mirrors Group here on Murkeyside.
The relationship between McKenna and the editor of the Daily Post Mark Thomas was exposed in Private Eye that Downtown Liverpool sponsor the Posts Views and Blogs section, including the Editors blog.
http://liverpoolpreservationtrust.blogspot.co.uk/2013/03/frank-mckenna-in-private-eye-again.html

So they let it lie low for a few weeks and then get back to the same old habits
Recently we were amazed as to the fact that Margaret Hodge called Peel Holdings, who are  prominent members of the shady organisation that is Downtown Liverpool in Joe Andersons Pocket, Tax dodgers. And those at Smoking Mirrors who do not report the truth locally, withhold the information from their local dwindling readership. And you have to ask why the readership is dwindling. Could it be because they are no longer trsuted. http://liverpoolpreservationtrust.blogspot.co.uk/2011/10/frank-mckenna-representing-peel.html

Although they did expose St Andrews Church was sold to a fraudster for a quid.
http://liverpoolpreservationtrust.blogspot.co.uk/2011/12/st-andrews-church-sold-to-convicted.html

But did it make any difference?

We have informed the local press in inumerable occasions about many local dodgy deals and we have to say quite a number of those were buried only to surface in the likes of Private Eye and national publications.
http://liverpoolpreservationtrust.blogspot.co.uk/2013/02/frank-mckenna-files-no-1.html

Why is this all happening in plain sight.
http://liverpoolpreservationtrust.blogspot.co.uk/2013/05/david-wade-smith-costs-taxpayer.html
It was not long ago that David Wade-Smith, Liverpool's unelected cabinet member for business, was made Chairman or top dog in McKenna’s Downtown Liverpool. His role in the Council is surprising to us, but seeminly not to the local papers.
Nevertheless, Joe Anderson gave him this role (under the table?) , despite Wade Smith costing us the taxpayer  £6.5million quid.
http://liverpoolpreservationtrust.blogspot.co.uk/2013/05/david-wade-smith-costs-taxpayer.html.

So yesterday's front page in the “Weekly Ghost” writer for the council promoted McKenna elevating him to Guru status.
Why did they even promote this non headline, when we have been calling for Frenson CPO's for years?

A portfolio of properties has gone into administration under the auspices of one of the Anglo Irish Bank (The biggest bunch of shysters of all  http://www.independent.ie/business/irish/inside-anglo-the-secret-recordings-29366837.html ) and the portfolio contains about 300 properties. Some may have bee owned by the  Frenson.
So who is McKenna representing when he says they should CPO’d.
The Council had originally sold most of the portfolio to Frenson under a promise of regeneration some time ago. Frenson who just sat on them waiting for them to fall down and the land value to rise.

Iliad the vandals of 6 Sir Thomas Street were one of the first members of Downtown Liverpool In Joe Andersons Pocket and they seem to be ruling the roost in the Ropewalks area.

Plans to knock down two more listed buildings in Duke St have largely gone unnoticed, we can’t do everything.

So what future for this area if one of McSpivs mates, get hold of the properties?
And what does Joe Anderson know of this?
Is he in on the press release?
Also what may be an important issue?
What is to happen to those small thriving businesses that are part of the portfolio McKenna wants someone unbeknown at present to get their hands on.

We have heard on the grapevine that developers have already been eyeing up Wolstoneholme Square as the location for the Camden Market of the North.

Which is code for lets lets get our grips on some real state and stuff the small businesses.

Posted by Liverpool Preservation Trust at Friday, July 19, 2013 No comments:

Boycott The Liverpool Echo-You Know It Deserves It. 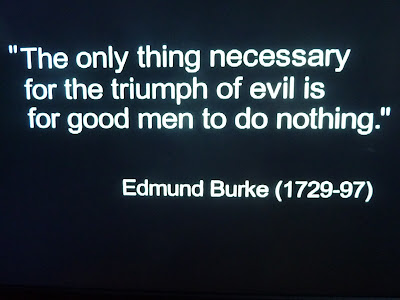 For too long now the rubbish that has been printed in the Liverpool Echo, edited by Alaistar Machray has gone unchallenged. You have watched while they have hidden facts and replaced those true facts with mistruths that are fed to them by shady PR companies.

We think it time that we watched very carefully just what the corrupted regime at Trinity "Smoking" Mirror Group at Oldham Hall Street is up to.

Posted by Liverpool Preservation Trust at Monday, July 15, 2013 No comments:

Should Alastair Machray Be Sacked-From His Daily Post As Editor Of The Liverpool Echo For This Insult To The Heroes Of The Battle Of The Atlantic? 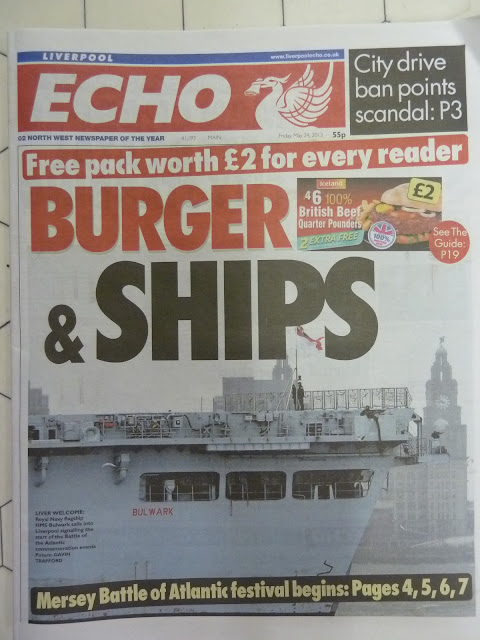 Email ThisBlogThis!Share to TwitterShare to FacebookShare to Pinterest
Labels: Alastair Machray, Trinity "Smoking" Mirror Group
Newer Posts Older Posts Home
Subscribe to: Posts (Atom)
"THESE OLD BUILDINGS DO NOT BELONG TO US ONLY;...THEY HAVE BELONGED TO OUR FOREFATHERS AND THEY WILL BELONG TO OUR DESCENDANTS, UNLESS WE PLAY THEM FALSE.