Liverpool Preservation Trust: The Liverpool Echo Sinks To An All Time Low-A Free Burger To Honour The Battle Of The Atlantic Burgers and Ships

Liverpool Ducks-We Have Been Truly and Utterly Conned. 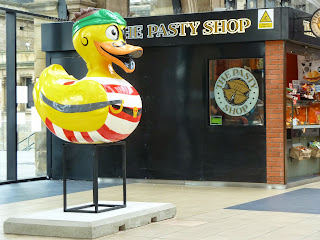 Public Sculpture. “What The Duck”
Being European Capital of Culture in 2008 was a statement.
But that title does not guarantee that the public who do have a bit of style about them will be best served by the honour.
Just look what Merseytravel did with the culture budget. 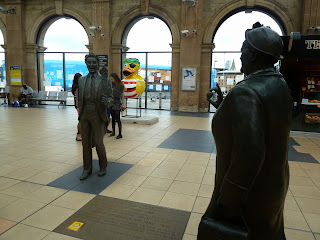 2008 saw the untalented Tom Murphy being chosen to litter the streets with garbage.

“Ken Dodd with a Kebab” and “Bessie Braddock, depicted as a sack with a head” were erected, to scare the visitors at Lime Street Station.

You can tell you have arrive in Liverpool when you are greeted by these cheap and nastys, that cost a hundred grand!!!
And now right next to them is a stupid duck!
http://liverpoolpreservationtrust.blogspot.co.uk/2009/07/liverpool-european-capital-ofbad.html
We also paid for the statue of Bishops Warlock and Shepherd,
You know the ones on Hope street. Are they Eric and Ernie, I am none the Wiser.
http://liverpoolpreservationtrust.blogspot.co.uk/2009/09/tescopool-is-there-hope-in-liverpools.html
An even bigger statement is that as a city the guffoons who are spending the money have little or no no style and it is shown in this pathetic attempt to spend taxpayers money.
If Superlambanana was not bad enough. We now have to endure the tackiest plastic childish flock of Ducks, boldly displayed on the streets. They have even put one next to Kenn Dodd who had to try to keep a straight face at the unveiling saying”At least there is somewhere for the pigeons now”.
So Liverpool has a load of Ducks. Yes Ducks, not Mallards or beautiful Pintails but the sort of ducks you give your kids to play with in the bath. It is hard to believe that someone has sanctioned this.
The Mayor of Liverpool is no educated man, that is a fact, but really for him to waste public money while closing nursing homes and libraries down is beyond a joke.
It is obvious to the writer that we need those libraries for the education of Liverpool's top brass and we need to fill them with books on culture to educate them. 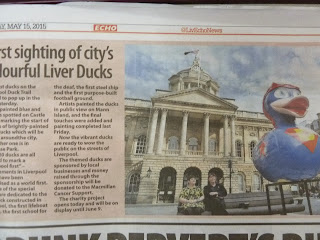 While they represent the city they should not behave in a childish and infantile manner because we all have to carry the can. So when next week, hundreds of thousands of visitors come to the city to see the Cunard Liners on the Mersey and marvel at Liverpool's great heritage and its Maritime past, they will also be able to get a glimpse of the future where the sculpture is chosen by a five year old.
No wonder because to pay for the “tat on our streets” they have closed down too many nurseries and to keep the kids occupied they are asking them to contribute to running the sculpture programme.


Liverpool Capital of Culcha, You're 'avin a laff”


CODA
We understand that the ducks are for a good cause Macmillan Cancer Support. We think that something better could have been created.
Meanwhile the plods at the Liverpool Echo tell everyone how great it is and appeal to the lowest denomination...............their readers.
Posted by Liverpool Preservation Trust at Friday, May 15, 2015 No comments: Links to this post