Alastair Machray Apologises-But Its Too Little Too Late 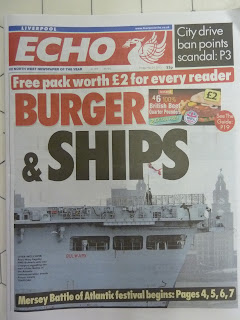 So how come the editor of Trinity Mirror Group here on Merseyside was able to get away with this?

The staff there at Old Hall Street have let him get out of control by not checking the man, by allowing him to subject the papers representations, and by doing so, theirs.
By giving out freebies from one of his mates, probably, at the Golf Club and chumming it along in a headline Machray has become a fool in the eyes of his journalists, some of who do work hard while others act as Frank McKenna's PR.

But not one of his scared little men challenged him; nobody will dare stand up to him.
Would they be Bevan Boys in times of war?.
It is no wonder the papers have lost circulation when the editor cannot be trusted.

A free burger from Iceland and his little bit of fun, by the man with the big title of, Editor in Chief, made all those news poodles look even more stupid than they already often do. With their ragged edge reporting direct from the council website and the numerous PR firms with ex Daily Post and Echo employees spinning rubbish, out of control.
You should be ashamed of yourselves, really you should. There was time that your employees were respected, now you cant be trusted. http://liverpoolpreservationtrust.blogspot.co.uk/2013/07/boycott-liverpool-echo-you-know-it.html 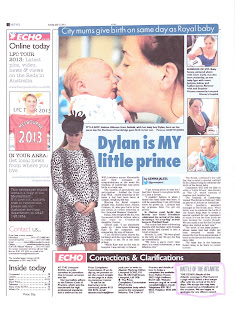 Why nobody challenged him, is why he gets away with taking the paper down to such a low level, as low as, The Sun.


Members of the local Naval representation were shocked and horrified we were told, they felt let down and humiliated
Those that lie on the bottom of the sea that lost their lives tossed and turned for sure when, in our opinion, the ignorant man declared it to be a little bit of fun.
It is hard to put into words how small a man is, when he does not even realise his mistakes, when he is representing a city, that lost a generation, that fought for the undignified mans freedom of expression.

The press complaints commission, a waste of time, said they couldn’t investigate, what, they, called, bad taste.

So a front cover of humiliation proportions and Machray pints a one-inch square as an apology buried at the foot of the page so no one will notice.

How does he think he can get away with this? 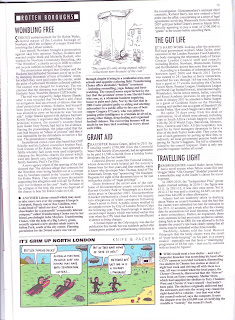 This issue sees Roz Gladdon the Deputy Mayor (will someone put the horrendous Gary Miller out of our misery) of Murkeyside and friends showing us up after being exposed in Private Eye.
Just how are they getting all this shady information about Murkyside?
We believe they are only uncovering the tip of the iceberg and there will be much more to come.
Its a shame the local press dont seem able to expose any of this, and if they did would that make a difference to the way people who may be inclined to pocket a pound or two behave.
Liverpool recieved £950,000,000 European Objective One money that was dished out amongst other people to people running wastefull insitutions like Neil Scales and his mates David Wade-Smith.
Who did the accounting for such a huge sum?

It was, reported by Bartlett or one of the other, if you were to believe the sob stories, Prisoners at Port Merrion on Mersey, that The European Union questioned why 200 florists were trained in a city that had did not have enough florists shops to employ them.
Is it because no-one was checking? Its no good reporting after the event you lazy little devils..

Posted by Liverpool Preservation Trust at Thursday, August 15, 2013 No comments: Links to this post 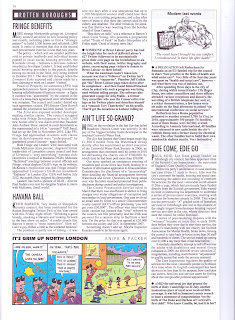 How many members of Downtown Liverpool In Business do we have to look into before notice is taken in the local community here on, what Private Eye calls Murkeyside.
Dont forget Frank McKenna sponsors the Liverpool Daily Ghost "views and blogs" section that contains the Editors blog, and is so often featured within the local papers that we think he is dictating the news.
The reality is that to expose the comings and goings of McKenna and his mates, it has to be done in other journals rather than Trinity "Smoking" Mirrors here on Murkeyside. This is a reality.
Why was this alleged VAT carousel fraud not exposed in the local papers.
Was it blocked by the Editor?

Joe Anderson is a regular guest speaker at the events that McKenna puts together to sponsor his business partners.
Is The Liverpool Embassy in London a way for McKenna to extend his business clients?
These are questions we will be looking into..............as the corrupted systen that is the local papers dont seem to want to.

Posted by Liverpool Preservation Trust at Wednesday, August 07, 2013 No comments: Links to this post

Liverpool's New Convention Centre Another blot on the landscape. 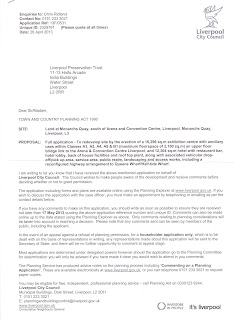 The New Museum is bad but tell you what lets stack three of them one on top of the other and stick it the other side of the Albert Dock, which is the largest conglomerate of Grade I listed buildings in the country and there you go Liverpools WHS completelty brutalised forever. What is even worse is that we recieve a planning application which is submitted by Liverpool City Council﻿ and is then going to be considered by Liverpool City Council.
Posted by Liverpool Preservation Trust at Friday, August 02, 2013 No comments: Links to this post

Museum of Liverpool-Its Just One Cock Up After Another.

MANCHESTER architect AEW is facing a £1.1m bill after being successfully sued by the Museum of Liverpool.


The museum's board took the firm to the High Court earlier in the year over design flaws at the new museum on the city's waterfront.

The claim centred around problems with steps and an amphitheatre-style seating area at entrances on either side of the building. There were also faults with the suspended ceilings, one of which collapsed.

During construction AEW and its contractors struggled to make the steps flow seamlessly into the seating area, a feature of the original designs, and contrived a concrete plinth to cover the discrepancy. When this was seen by the museum's director Sharon Granville it was described as "an abomination".

A judgement issued by Mr Justice Akenhead recognised that one of the contractors, a joint venture between Galliford Try and Danish builder Pihl, was also partially responsible. It has been ordered to pay £205,000 of the total £1.1m bill. A separate judgement relating to the work on the ceilings is expected in several weeks.

In his summary the judge said: "The truth is that AEW knew and must have known by the October or November 2009 period that there had been a serious mistake and that it was simply not possible to achieve the practical and aesthetic effect required by the client and indeed by the planning permission which had been obtained.

"It is simply extraordinary that competent architects could consider that it was acceptable to adopt the plinth solution in any event given their client’s aspirations and wishes and, even worse, without seeking the informed approval of its client."

Sharon Granville, executive director of the Museum of Liverpool, said: "The court has found in favour of National Museums Liverpool on all counts. We are very pleased with the outcome.

AEW's managing director Steve Burns said: "We are disappointed with the outcome of the case. The matter is being dealt with by our insurers and does not affect the ongoing health of the business, but we take criticism seriously.

"We pride ourselves on outstanding levels of service, a fact borne out by over 95% of our business being for repeat clients. The management structure of the company has completely changed since the events of 2009 and we have moved in a different direction since then."

Construction started in 2007 and the museum opened in 2011. The museum originally sought damages of £
Posted by Liverpool Preservation Trust at Thursday, August 01, 2013 No comments: Links to this post

Email ThisBlogThis!Share to TwitterShare to FacebookShare to Pinterest
Labels: David Fleming, Dr David Fleming, Liverpools Pier Head Vista Gone Forever, Museum of Liverpool, Pier Head
Newer Posts Older Posts Home
Subscribe to: Posts (Atom)
"THESE OLD BUILDINGS DO NOT BELONG TO US ONLY;...THEY HAVE BELONGED TO OUR FOREFATHERS AND THEY WILL BELONG TO OUR DESCENDANTS, UNLESS WE PLAY THEM FALSE.