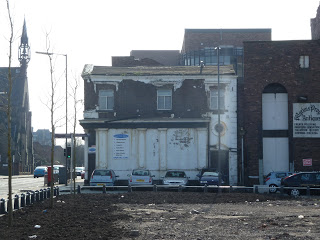 
Another Hacking Scandal-Right In Front Of The Liverpool Conservation Officers Eyes.
It started some while ago, a complete lack of disregard for history.
Those concerned slowly become ignorant to the law, and the law lets them get away with it. Because they were the law.

A subculture unfolded, where no punishment is dished out, there may even be advice given directing people how to get way with it.
Those rioters did no damage compared to the Liverpool planners and their property developing councillors.
It started, with Trevor and Doreen Jones, so said Private Eye, who wacked down the last Ships Chandlers on the Strand, next to the Baltic Fleet public house. They downed it on the Saturday after a listing application was received by the council on the Friday.
http://liverpoolpreservationtrust.blogspot.com/2009/03/superlambanana-land.html
http://liverpoolpreservationtrust.blogspot.com/2009/03/undeclared-interest-of-jones-vote.html

Lady Doreen Jones was the then chair of the City Planning Committee. What a scandal.

Then it was 6 Sir Thomas Street, they, of Iliad, the developers, seemingly quite cosy with the city council, sent out a team of ignorant little hackers with jack-hammers to smash up the frontage, carved Liver Birds and all. http://liverpoolpreservationtrust.blogspot.com/2009/03/heres-one-they-did-earlier.html

The task to smash off the façade……right under the window of the then council leader Warren “War Zones” Bradley, who said “I wondered what all the noise was”.
This happened while awaiting the visit of an English Heritage Inspector. It now looks like a pigs ear.
http://liverpoolpreservationtrust.blogspot.com/2011/01/layla-hotel-liverpool-destroying.html

Then the arrogant Maghull Developments smashed off the façade of Josephine Butler House when, guess what awaiting a listing visit from the English Heretics.
Hahnermann House had received a Grade II listing that we applied for, hours before a planning committee decision to develop the site with a horrendous extension.

Mike Hanlon would tell me later on “You did us a favour there, with Hahnermann House”.
http://liverpoolpreservationtrust.blogspot.com/2009/04/liverpool-preservation-trust-11-13.html

He did himself no favours in destroying JBH as all the fluffy duffys were out in force declaring it a national disaster. http://liverpoolpreservationtrust.blogspot.com/2009/03/httpwww.html
While they dont give a hoop to anything out of Hope Street.

http://liverpoolpreservationtrust.blogspot.com/2009/10/liverpools-baltic-triangle-to-become.html
Its a Culture of Facade Hacking more like. Some things never change.
Drivingdown Bridgewater Street and there was a cherry picker and hackers at work, twatting off yet another facade, nothing changes. Its not listed. Steve Corbett says it has architectural merit though.....and thats about it.

Here's the sketch, smash the façade about on any given property, its a tried and tested method, and it looks a mess and then claim its an eyesore and then an otherwise decent building is downed and hey Presto! a Jerry Build goes up for half the cost. Hacking scandals, Liverpool is full of them

There are already plans for next door. 3, 5 and 7 Bridgewater Street.

The Conservation Officer is a waste of time, I even get the feeling he has to be aware of it all, as no-one in the job of Conservation, in my opinion, can be so thick, or so behind the times, well apart from John Hinchliffe the World Heritage Waste of Space that stands by and watches the WHS be decimated.
Not sure if the both of them are deaf and dumb because they never hear anything and never say anything. On the rare occasion they do stutter some rubbish its usually wrong and misguided. http://liverpoolpreservationtrust.blogspot.com/2010/08/heaps-rice-mill-grade-ii-listed-and.html
Heaps Rice Mill will be down next.
While Malcolm Kennedy, the Council Cabinet Member for Regeneration (code for lets help Peel Holdings destroy the WHS) appointed by Frank McKenna, I mean Joe Anderson, tells us how wonderful it all is.

Regeneration or Degeneration, another hacking scandal, this time, half a mile from what we are told, is a booming Grosvenor-pool.


You advised it was an historic building.


Mr Corbet this is in Bridgewater Street in front of the new development for the Womans training and next to the antique store.
I have pictures of the facade being hacked off with a cherry picker and wish to ask you the status of this structure, my understanding is it may be listed.
I look forward to hearing from you
Wayne Colquhoun
Reply Forward
liverpool preservationtrust
4/15/11
to Nigel

Mr Corbet this is in Bridgewater Street in front of the new development for the Womans training and next to the antique store. I have pictures of the facade being hacked off with a cherry picker and wish to ask you the status of this structure, my understanding is it may be listed. I look forward to hearing from you Wayne Colquhoun

thanks for letting us know about this. The building is neither listed nor in a conservation area. However, it does appear to be an interesting historic building in the 'Baltic Triangle' - an area that colleagues in the Council and at Liverpool Vision are trying to encourage improvements and investment.

Removing the render would materially alter the building's appearance which would be subject to planning control. I have copied-in my colleagues from the Planning Enforcement Team (who will confirm whether a breach of planning control has occurred) and the City Centre Planning Team (who will advise what is needed to be done by the owner to remedy the breach - taking advice from my own team as necessary).

I will ask my colleague Paul Vertigen in the Planning Enforcement Team to let you know the outcome (thanks Paul).

Mr Corbet this is in Bridgewater Street in front of the new development for the Womans training and next to the antique store.

I have pictures of the facade being hacked off with a cherry picker and wish to ask you the status of this structure, my understanding is it may be listed.

I look forward to hearing from you 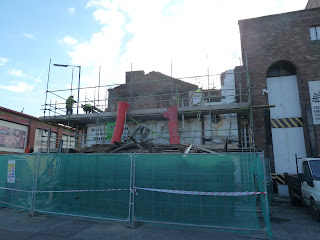 Here is what the Conservation office do...........Sod all.
Posted by Liverpool Preservation Trust at Friday, March 15, 2013 No comments: Links to this post

Liverpool Preservation Trust: Is Joe Anderson The Biggest threat To Liverpools Skyline Since The Lufftwaffe. 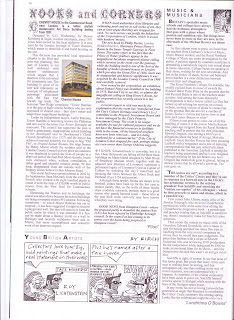 It take Private Eye to mention it. Its only a footnote and what of the fact, that,  for nearly two years there has been a crane next to The Black Coffins on Mann Island. This development by Matt Brooks of Broadway Malyan  is quite rightly noted by 'Piloti' in NOOKS AND CORNERS as destroying the best views of Liverpool.  http://liverpoolpreservationtrust.blogspot.co.uk/2013/01/mann-island-has-structural-problems.html Those cherished views from the Albert Dock over to The Port Of Liverpool Buildings. Not forgetting this is also the view, that Liverpool Museums also had to pay out £750,000 to spoil. How can you make such a pigs ear out of a silk purse.
Fuzzy Felt Fleming of Liverpool museums now has the architect of Liverpool's giant sunlounger in court. No not Kim Neilson of 3XN who he sacked, the other one who he is now blaming for the mess. http://www.liverpoolecho.co.uk/liverpool-news/local-news/2013/03/04/national-museums-liverpool-bid-for-compensation-over-design-of-new-museum-of-liverpool-to-begin-in-high-court-next-month-100252-32921631/
Ho many different people ill old fuzzy felt blame 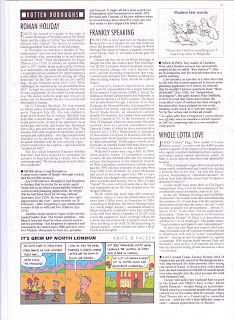 Crony Capitalism they call it in Private Eye, and in this current issue they make a good job at describing the way local Liverpool works. Murkeyside they call it. And there is good reason to do so. McKenna has been in trouble with the law before and it appears to say here in Private Eye he is now dictating policy to a elected Mayor, Joe Anderson. ﻿They go some way expose the links with the DLiB organisation and local politicians, even David Wade Smith, who was employed by Liverpool City Council and is now the Chairman of DLiB, gets a mention. You have to wonder why the local press don't do an expose on McKenna.
Is it because, as Private Eye say "And could the supportive local coverage have anything to do with DLiB sponsoring its opinion section-which includes the editors blog?" click on pic to read

Lets hope those in power at Trinity "Smoking" Mirror group read the article and decide enough is enough, the local press should be reporting on Crony Capitalism and not be part of it.


Here is a few we did earlier http://liverpoolpreservationtrust.blogspot.co.uk/2013/02/frank-mckenna-files-no-1.htmlnot this was written not too long ago

and a little longer http://liverpoolpreservationtrust.blogspot.co.uk/2011/10/frank-mckenna-representing-peel.html

was given a job as Buiness advior by Joe Anderson


Posted by Liverpool Preservation Trust at Wednesday, March 06, 2013 No comments: Links to this post

Liverpool Preservation Trust: Who is Stella Shiu-And Who Are Peel Holdings Invisible Investors?

We have done everything possible to alert the public to the loss of WHS status that puts up on the top tier in terms of tourism and future prosperity but it seems the coalition government dont care about Liverpools past.


A public inquiry would have given all parties the opportunity to make amicable arrangements that protected Liverpools past and took it into the future.

Its still not too late to take out the skyscrapers that Unesco and English Heritage object to.

This is the city that knocked down the Cavern Club then called it Beatles City. http://liverpoolpreservationtrust.blogspot.co.uk/2012/10/langton-dock-pumping-station-amongst.html

Posted by Liverpool Preservation Trust at Monday, March 04, 2013 No comments: Links to this post

Email ThisBlogThis!Share to TwitterShare to FacebookShare to Pinterest
Labels: Joe Anderson, Liverpool Waters, Peel Holdings
Newer Posts Older Posts Home
Subscribe to: Posts (Atom)
"THESE OLD BUILDINGS DO NOT BELONG TO US ONLY;...THEY HAVE BELONGED TO OUR FOREFATHERS AND THEY WILL BELONG TO OUR DESCENDANTS, UNLESS WE PLAY THEM FALSE.