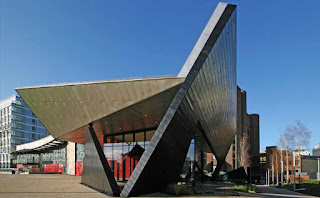 
They build sheds and they build them badly.
The only problem is that they are not supposed to be building sheds they are supposed to building new modern structures that will last.
Engaged by a Grosvenor contractor BDP to build a swanky showpiece structure as part of the Chavasse Park development that opened in 2008, they went for an origami style black building that reflects........well nothing really.....it doesn't match anything around the Park.
Chavasse Park is the bit of green they stole from the public to build cafes restaurants on what was a grassy park.
A bit basic but it was green lung in the city that was used by office workers to let off steam.
It still is now to some extent but its a lot more stressful now.
Yes they paved Paradise (Street) and put up a parking lot.
Then you have even more foolish people applauding bad design here is a revue by Sevenstreets.com (probably a paid for advertorial as that's what Sevenstreets do)
http://www.sevenstreets.com/liverpool-one-dont-make-us-straight/ 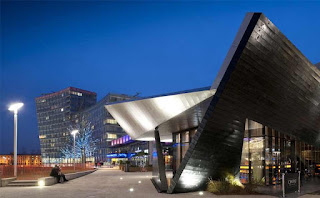 And on top of this parking lot Studio Three built a shrivelled up shed.
Just have a laugh at their foolish design.
They were put up for awards for this new snazzy bit of modernism.(sic)
Praise was lauded onto the new young up and coming company that was about to take the world, or maybe Liverpool by storm.
Inspired by a crumpled ciggy packet the set about building a bar with sloping sides and roof that must be very confusing when you come out after a half a pint of cider and think you have drunk about 12 pints.
Its all over the place. But the critics loved it. Critics usually know nothing of what they are criticising. This critic does.
This is a perfect example of what happens when the new architectural kids on the block are let loose with their lack of experience.
They build something that looks like it is falling over.
But worse the people responsible did not understand even the most basic of rules. 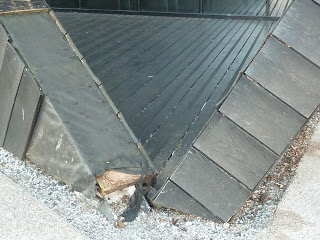 That water needs to be taken away from a building.
Especially one that is made of wood, that also is in direct exposure to the sun.
This building saps up water like a sponge because all the angles direct the rain into little pockets that hold it in tight angled places. 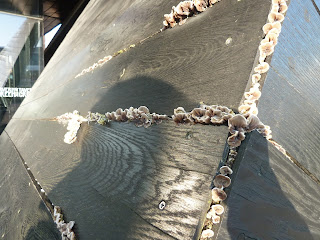 Then the sun dries it out and it warps, exposing more of the underneath and then even more water penetrates and you get.......a mushroom farm.

Basic stuff that any simple person would understand.
But apparently not the whizz kids of Studio 3 didn't.
This sort of Jerry building is made even worse by the cost of it rumoured to be a million pounds.

When the wood is removed for repair, after seven years this was a wreck, you then can see that the frame is constantly under attack from the elements and though the mushroom farms look bad just imagine what its like where you cant see.
http://www.rjcjoineryltd.co.uk/case_chavasse.htm
The joinery company RJC should hide their heads in shame instead they have put it on their website. 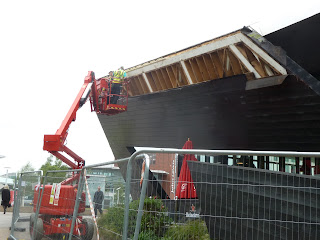 So great was it that Architects Ellis Williams snapped up the Studio and merged it with the firm.
Hey there's nothing like thinking small. http://www.ewa.co.uk/project/chavasse-park-pavilion

The architect Mushtaq Saleri should be struck off for this. If he is in fact qualified.
Surely he couldn't have been. Could he?
I find it hard to believe that anyone with more than a low grade eleven CSE qualification had the intellect to knock this up.
And to use softwood.

Posted by Liverpool Preservation Trust at Tuesday, February 07, 2017 No comments: Links to this post 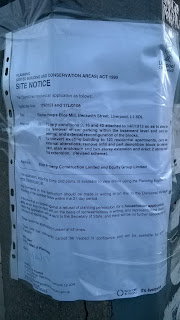 Conservationists got it listed and now the listed building is to have a Lawrence Kenwright Signature living STYLE loft extension bunged on the top of it. You couldn't make this up. We get the building listed and then they ruin it. This application is made by one of Joe Anderson's cosy mate developers.

The city council trumpeted to UNESCO that THEY...had saved the Mill. Can't someone save us from the ill educated fat man that is letting his mates do what they want with our heritage.
http://liverpoolpreservationtrust.blogspot.co.uk/2014/09/heaps-mill-now-grade-ii-listed-is-about.html

We warned of this in 2014.
http://liverpoolpreservationtrust.blogspot.co.uk/2014/09/heaps-mill-now-grade-ii-listed-is-about.html

What will Engish Heretics say

MORE IMPORTANTLY WHAT WILL YOU SAY?
Posted by Liverpool Preservation Trust at Thursday, February 02, 2017 2 comments: Links to this post