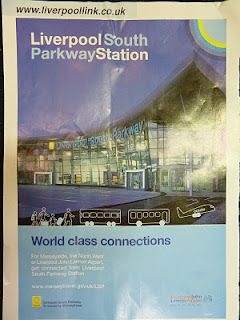 Yes someone has to say it especially as they are spinning it that this is, or has, "World Class Connections".
Well the reality is they spent £30,000,000 of our money rebuilding this station and rebranding it.....................but the London trains cant stop there because the platform is not long enough.
So you get off at John Lennon Airport you get a bus to Lime Street Station and get on a London train and then steer right past the station that claims to have world class connections. The planners can only be described as world class idiots for even attempting to kid you that it is a success. All that is missing is a Ken Dodd statue like the one that was unveiled at Lime Street Station and Neil Scales could have wasted another couple of hundred grand.
http://liverpoolpreservationtrust.blogspot.com/2009/07/liverpool-european-capital-ofbad.html
The local press kept all this quiet in 2008 so as not to show how innefectivly the billion pounds of European Objective One funding was being distributed by the North "Vested Interest" Development Agency.
So now Joe "Come and inspect the books" Anderson has opened a Embassy in London so he can promote business for Frank McKenna's mates at Downtown Liverpool.  http://liverpoolpreservationtrust.blogspot.com/2010/06/frank-mckenna-suckles-at-breast-of-joe.html
Anderson just sounds like a whinging scouser blstering away. http://condensedthoughts.blogspot.com/2011/02/joe-andersons-bluster-bombast.html


They wont be promoting this, err, apparent oversight to those business men who come here by plane from London and waste hours sitting on a bus going through the council estate in Speke sitting next to a scally in a trackie with a Pit Bull Terrier.
And then when they get to Lime Street watching as the train goes right past where they started.
Posted by Liverpool Preservation Trust at Monday, February 29, 2016 No comments: Links to this post

Liverpool Preservation Trust: Neil Scales and Merseytravel Spend £67,000,000 Of Your Money-Who Sanctioned This?

Liverpool Preservation Trust: Merseytravel-Mark Dowd and his Expense Claims Are To Be Investigated By The District Auditor.

Liverpool Preservation Trust: Should Merseytravel Be Investigated By The Police? 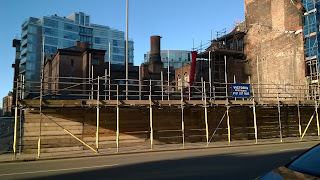 There is supposed to be protection against demolition in a world heritage site......isn't there?

Lets take a sentimental journey back to 2009 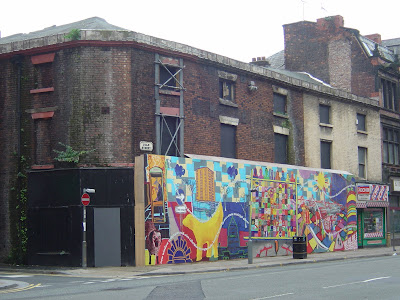 Here we start right in front of the Municipal Buildings on Dale Street and we walk towards the Town Hall where the planning committee met. All those council members including Colin "Cover up" Hilton, Mike Storey, Warren Bradley and Councillor Berni Turner who describes herself as The English Heritage Historic Environment Champion, let me just check I have got that right, yes, will have walked past this for.........well decades really. And here they are now listed, but still falling over. No matter how many soundbites we get in the local press the fact is there for all to see this council is immune to dereliction despite telling us how wonderful they are.

http://www.liverpooldailypost.co.uk/liverpool-news/regional-news/2008/02/05/liverpool-georgian-terraces-given-listed-status-64375-20435418/
So over the road from there is Old Jamaica, we call it Old Jamaica because the Georgian building was bulldozed despite strenuous efforts to save it. We started off complaining about the UPVC window front that had been fitted in Revive hair salon, that now needs reviving because it is shut. To no avail there it was dust. THIS IS ALSO A STROLL DOWN THE WORLD HERITAGE SITE.
NO ITS NOT SOME THIRD WORLD COUNTY THIS IS A EX CAPITAL OF CULTURE.

The next street is Sir Thomas Street runs adjacent to the municipal buildings. We tried to save No 6. Now demolished. That too needs reviving as after destroying the facade it is now well and truly credit crunched. What a waste.http://liverpoolpreservationtrust.blogspot.com/2009/03/heres-one-they-did-earlier.html 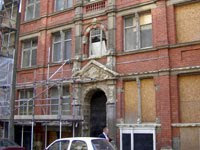 Then we just go a short way down and we come across further dereliction, and this is just an example, there is more. To think this is the route that Berni Turner would have taken to the planning committee meetings to sit alongside Councillor Steve Hurst, who passed the demolition of 6 Sir Thomas street with such vigour I could not believe what I was hearing, it seemed like he wanted it down.
Doreen "Dame of Disaster" Jones rubber stamped it and a very interesting point of fact, that needs, considering is, that she was the previous English Heritage Historic Environment Champion. She who knocked down the last ships Chandlers in the city along with her husband Trevor.http://www.helm.org.uk/upload/pdf/2005_leaflet_version_7_final_version.pdf?1251366270 She who in my opinion passed plan after plan with no thought for world heritage or in fact heritage, who said "Politics is a dirty business" while supporting Steve Hurst whilst he was under caution. To think she was a heritage champion is a joke. 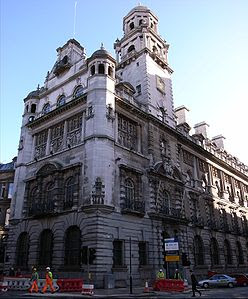 And down to the Royal Insurance building on the Corner of Dale Street and North John Street on English Heritics at risk register for a decade laying there decaying with all the vultures waiting to roll over its carcass and pick dry its bones.
So there you go Berni the memories will come flooding back of how you strolled down Dale Street off to planning meetings and others, to defend our heritage day after day and what a wonderful job you are doing and how you proudly proclaim your title as
The English Heritage Historic Environment Champion.
Three Cheers for Berni.......hip hip.... hang on, what have you been doing Ms Turner, this is a world heritage site that you have been journeying along for years and it is a diabolical mess.
Posted by Liverpool Preservation Trust at Friday, February 26, 2016 No comments: Links to this post