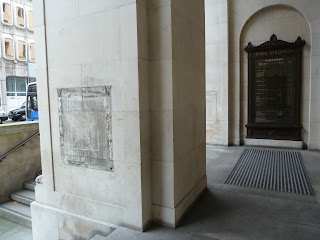 This is what happens when ignorant people with no respect for the past get hold of one of Liverpool’s historic gems.


India buildings is one of Liverpool’s jewels and has always been held in the highest regard it is Grade II listed and an application has now been made to upgrade this to Grade II *.
The conservation officer is Wendy Morgan, so it is not in good hands.
Monday last a member of the public alerted the Conservation department of the City Council and bloody ‘ell they dealt with the matter and cautioned the owners for the criminal act of removing six historic bronze plaques from the arched entrance way of the Water Street Entrance to India Buildings in no time at all.

Chris Griffiths the City Council buildings At Risk officer was made to do a bit of work and a letter was sent to Green Property telling the vandals to re-instate the plaques forthwith.

The speed and efficiency of this astounded us. Chris Griffiths has done a good job here.

The tradesman who took the plaques off served his time with Dewhursts….the butchers.............. well he must have done as seeing the mess of the studs bent over in the hand carved Portland Stone pillars and the holes in the wall was hard to bear.

Jonathan Brown of the Merseyside Civic Society said "It is the desecration of a city jewel”.


What is also apparent is that the out of town owners, what can be worse than Irish Investors based in London with Manchester agents, want to close Holts Arcade which is also Grade II listed thus denying the public access to it.

Holts arcade was built over the original Chorley Street that was taken over to build the huge City block style building designed by Liverpool’s favourite architect Herbert Rowse who also built the Philharmonic Hall and the amazing Martins Bank also in Water Street.

The Daily Post had it as its front page. http://www.liverpooldailypost.co.uk/liverpool-news/regional-news/2012/11/22/future-of-india-buildings-in-doubt-after-liverpool-council-cautions-owners-over-illegal-removing-of-entrance-plaques-99623-32280635/ Peter Elson doing the reporting.

And the Echo did a full page http://www.liverpoolecho.co.uk/liverpool-news/local-news/2012/11/22/fears-for-future-of-liverpool-s-landmark-india-buildings-100252-32281873/ followed up with a sort of response from Mike Tapp and Co of Greed Property Group.
The history of India Buildings is immense. The Echo ran another page the publics response is clear.
http://www.liverpoolecho.co.uk/liverpool-news/local-news/2012/11/23/u-turn-on-blunder-at-liverpool-s-india-buildings-100252-32290010/

Today in NW Businessweek a press release from Dougal Paver, who have now been asked to mitigate the situation, was written up by


By James Graham
THE owners of Liverpool's landmark India Buildings are promising a "significant" investment to attract new tenants.
Mike Tapp, a director of London-based Green Property, said the company plans to attract large firms to the Grade II-listed building, which is home to law firm DLA Piper.
He said: “The sort of companies who’d be attracted to a building of this stature will be ones who want to balance a modern working environment with the pleasure that comes from being in such a lovely space.
“They’d run a mile if we didn’t do a proper job of conserving its fabric and that’s what we intend to do. We’ve got architects and heritage advisors supporting us and, of course, the conservation officers in the council. I’m looking forward to revealing our plans in due course.”
The commitment came after a report in the Liverpool Post said the company had been cautioned by the city council for illegally removing eight bronze entrance plaques.
The report also claimed Green Property was planning to close Holts Arcade in the building and convert the shop units into office space.
Mr Tapp said: “The fact is that shopping patterns in Liverpool’s business district have shifted now that Liverpool One has brought the retail heart up to the edge of the office district.
"The area doesn’t generate the footfall it used to, either, as there have been some major relocations from the vicinity to around St. Paul’s Square. We’re keeping a close eye on things, but it’s not in our shareholders’ interests to offer a product to the market that isn’t viable.”
Until 2005 the building was home to the passport office. Earlier this year law firm Weightmans moved out for a new base at The Plaza on Old Hall Street.
The 350,000 sq ft building was built between 1924 and 1932 for Alfred Holt's Blue Funnel Line.
It is interesting to note that we have been informed that Mike Tapp of Green Property Group sanctioned the removal of the plaques. 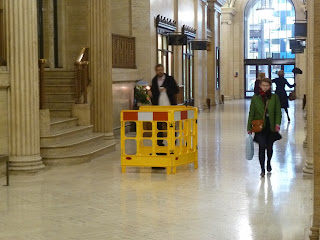 Here is yesterday with a bucket in Holts Arcade collecting water(for the third time) after another leak sprung through the vaulted ceiling.

What a great way to attract tenants.

Posted by Liverpool Preservation Trust at Friday, November 23, 2012 3 comments: Links to this post

Email ThisBlogThis!Share to TwitterShare to FacebookShare to Pinterest
Labels: Chris Griffiths, Daily Post, Liverpools Heritage at Risk, Peter Elson
Newer Posts Older Posts Home
Subscribe to: Posts (Atom)
"THESE OLD BUILDINGS DO NOT BELONG TO US ONLY;...THEY HAVE BELONGED TO OUR FOREFATHERS AND THEY WILL BELONG TO OUR DESCENDANTS, UNLESS WE PLAY THEM FALSE.