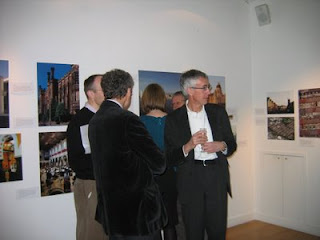 A year ago we wrote about the despicable Peter de Figueiredo and how he was being employed by Peel Holdings and I commented on how there should be some sort of laws against this sort of thing. As Liverpool's historic buildings advisor he was responsible along with Henry Owen-John the regional Development Director (sic) of the English Heretics, for some of the worst decisions that have afforded Liverpool's architectural demise since Goering sent a squadron or three to firebomb the gubbings out of us. Here he is with Julian Truherz his partner at the Save Exhibition Triumph Disaster and Decay. Marcus Binney the President of SAVE was given a personal of Liverpool by him. The other milksop face just obscured is Joseph Sharples who claimed all the credit for updating Pevsners even though most of the work was done by some-one else.
http://liverpoolpreservationtrust.blogspot.com/2009/04/who-polices-heritage-police.html

Yseterday at a planning meeting regarding Crosby town centre and its proposed disastrous developments that were defeated after 250 people turned up, a note was read out by the representatives of Sainsburys that said. We have a letter of support for these proposals from
Peter de Figueiredo who was, it was said, the historic buildings advisor for English Heritage and he supports the proposals that we are putting forward stating that in his opinion they are good for the area.
http://www.liverpooldailypost.co.uk/liverpool-news/regional-news/2010/09/16/sainsbury-s-50m-crosby-village-plans-are-rejected-by-sefton-council-68459-27277397/

This man lives with his partner in a Gothic pile on the Wirral where he entertains the likes of the c20 society with guided tours and posh-knobs it with anyone who can give him a fee, when he is not in his holiday home in Tuscany. What does he care about Crosby.

I know he can sleep at night because he has never had a conscience and has been alloweed to get out of control by a system that does not police itself.
Someone shouted at one of the councillors playing politics as it was defeated 6-5 Shame on you.

Shame on you  Peter de Figueiredo you are a disgrace to your proffession, an opinion for hire. In my opinion, Whoring yourself to the highest bidder.
Posted by Liverpool Preservation Trust at Thursday, September 16, 2010