Ptolemy Dean has a View on Liverpools Regeneration 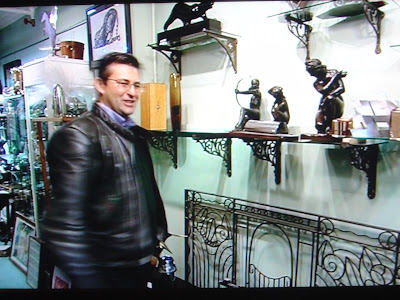 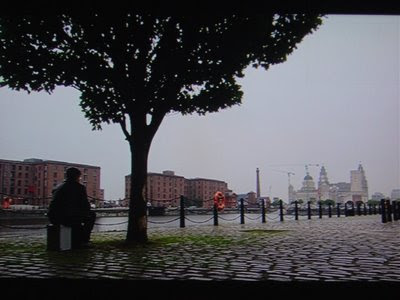 Patrick Moran did one of his passionate Cameos proclaiming “There is a magic architectural number of three a magic number in architecture terms, What is upsetting me is the space around the buildings is important as the buildings themselves and they are vandalising the skyline. They have stolen our skyline. To me this is the heart of Liverpool this is my Liverpool and when people come here they can see it’s a place that mattered” They cut my interview out because Pat looked like an old sea dog and we were really saying the same things But they filmed in the shop where I lined them up a group of neo-classical bronzes depicting our Three Graces and Ptolemy showed what happened in architectural terms when you mixed them with other styles.
“If you would not do this to your shelf at home he said why would you do it to your cherished views” he said 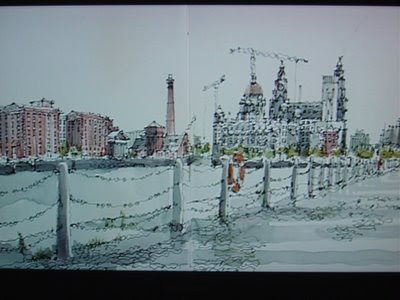 “It is not about living in the past its about celebrating and appreciating the past and I don’t think it’s a very big ask to say that if you add to a World Heritage Site you should do so in a way that doesn’t detract from its quality”.
Ptolemy sat by the arch to the old Salthouse warehouse “the reason I am sitting drawing these views is firstly to celebrate the incredible collection that is the world heritage site and secondly before it is to be taken away”
Ptolemy mused as he drew “You get the sense of the sky and how massive these buildings are, the fact that this view is being taken away is a tragedy. Already the new museum has blocked a vital piece of the sky. The gaps are like the silence in a conversation that is the architectural composition. Its like sitting in a opera and a mobile phone goes off and suddenly the pause is broken and the silence is shattered”.
“It is a fantastic skyline he waxed It needs to be cherished and preserved”
Posted by Liverpool Preservation Trust at Monday, July 06, 2009