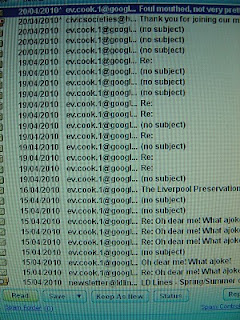 It is now obvious I am being stalked by a bunch of heritage fruitcakes with nothing else to do. Its hilarious. Use to having to argue with local authorities and developers now I am wasting my time with nutters. It seems a few people dont like the style to which we want to expose everything that is wrong in Liverpools so-called regeneration. Its like as if some of the heritage brigade dont get anywhere because they spend so much time sticking their ugly noses in other peoples business. Doing the developers a favour in the process.
We want nothing to do with do-gooding do nothings who seem to think that by, stalking, it will be of benefit to their sad existances. Make them feel better. Give them a Raison D'ete. I never asked for this and have to ask what has Liverpool got to do with a bunch of heritage mafiosa that dont live here, who in reality are more like a bunch of wet farts. I reluctantly spelt it out on Friday last http://liverpoolpreservationtrust.blogspot.com/2010/04/heritage-fruitcakes-from-bonkers-ville.html as a last resort to the continual bombardment of e-mails and comments and letters from, what we can only now conclude to be people with nothing else to do. It went worse. And its not just me either. http://badbritisharchitecture.blogspot.com/2010/04/sainsburys-supermarket-in-crosby.html some people stick their gobs in everywhere because they think they can hide behind psuedonyms. Everything that is wrong about the sad lives of heritage morons I have seen over the last months. It is like most of them dont even realise that they are collaborators with the establishment.
This is what my screen looks like, my personal e-mail address. One heritage collaborator has sent me nearly 500 e-mails despite telling them in no uncertain terms to stop. Everything that is wrong with why heritage causes go no-where is wrapped is up here in Bonkers-Ville. I think I may have to contact the police if they dont go away. Stalked by heritage pensioners some-one should take their zimmers away from them.
Posted by Liverpool Preservation Trust at Tuesday, April 20, 2010