Yes it is well deserved by the local rags. All the recent criticism, at the state of reporting and the way the Oldham Echo (nice term by Correspondent) http://condensedthoughts.blogspot.com/2009/08/still-speaking-up-for-merseyside.html seems to be run by local business through their press companies such as Finch and October Communications. Larry Neild who was the City Editor of the Post and Echo, now works for October, and it would not be too unreasonable to assume that the reason that Jon Egan employed him is to use his contacts at his old paper. Last time I spoke to him he was working on the congestion charge debate in Manchester! Peel holdings had a big interest in the outcome of that vote owning Trafford Park. The local papers no longer appear to have journos in the old tradition, who do the true work that their profession requires. Instead Trinity "Smoking" Mirrors Group in Liverpool rely on the Council (partners with Peel) and the local communications companies to feed them with snippets that they often get wrong, see yesterdays Daily Post. Larry Neild was once given an award by Frank McKenna's Downtown Liverpool and his acceptance speech lasted 15 minutes he had all those local business people in stitches. I liked Larry when we were working quite closely on a thing that I knew he held dear to him, the impending disaster that was to befall the world heritage site. But ath the same time http://www.liverpoolpsda.co.uk/Press/PressCuttings/06-2006/pelli+tower.htm was he doing a job for Grosvener or was he misquoted? And look at the mess at Chavasse Lawn of what he promoted as a jewel in the crown. http://condensedthoughts.blogspot.com/2009/07/wish-to-declare-interest-larry.html
It is alleged that the godson to the director of a national museum's offspring is quite high up in Trinity "Smoking" Mirror Group. Quite a lot of the local journos are moonlighting doing other jobs for other papers, glossy or not. Some owned by Trinty some not. Its all wheels within wheels.
I decided to post the article several weeks ago after I decided I cannot stand the style of the local papers anymore. Which began my criticism of the local rags with a lack of reportage that Peel had plans passed for a super-port at Salford, that the Oldham Echo and its Daily Ghost ignored. I questioned who paid for Mark Thomas's trip to Shanghai that he 'twittered' about.
Peel are sponsoring Shanghai 2010 along with Liverpool City Council. All we need now is Steve Hurst to be Liverpool's delegate on the stall and we will have a fete acompli.
I had boycotted buying the Post, well because its free, they give it away, but will not even look at the Echo, which is a bad paper in my opinion edited by........So I was bold enough to e-mail my complaints to both editors and the Daily Post business section giving an opinion as to the importance of Peels impending grasp and the threat to our local industry, complaining why it was not reported upon. Who are Peels press agents? It is my opinion they are getting preferential treatment by the press almost being suck holed to.
Fair enough weeks later an in depth article was done by Barry Turnbull. http://www.liverpooldailypost.co.uk/ldpbusiness/business-features/2009/08/05/is-new-manchester-port-a-threat-to-liverpool-92534-24317574/ In the same copy it showed an example of our fears manufacturing being moved to China and a piece about Princes Dock http://www.liverpooldailypost.co.uk/ldpbusiness/business-local/2009/08/05/peel-appoints-dtz-as-joint-agent-on-princes-dock-liverpool-92534-24317711/which they own. http://www.liverpooldailypost.co.uk/ldpbusiness/business-local/2009/08/05/new-bibby-ship-sets-sail-from-shanghai-92534-24317570/ This delay will suit Peel holdings who are now saying that it will now be able to barge goods down the Manchester Ship Canal and turning it into a good news story by saying it will free up the the roads. Remember the seed was sown by Tesco with wine being barged down the canal.....who spun that one in.....as if, Tesco are going to use barges with consumables.
We will lose a lot of jobs in Liverpool as a result of this shift of the port to Salford and the Daily Peel should have been up to speed.....ahead of the event, not after it.
So is it the editing why we get the news late? Is it because the printing is now done in Oldham that we are getting the Daily Ghost 5 days late? Or is it the transport situation? Just wait till the snow comes in, and what about this preferential treatment of Peel?........then the penny dropped when I was sent this picture here it is the reason the news is late, its the new mode of transport for the local press, barging the paper down the Manchester Ship Canal from........Oldham. 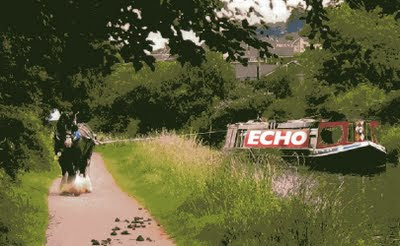