One Park West-Voted One Park Worst by the public. 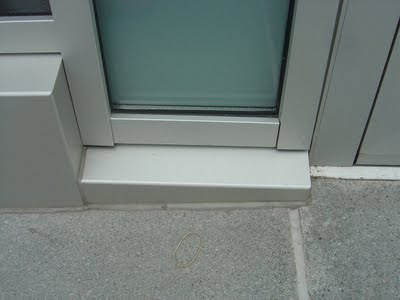 PR Stunt backfires big time. Think Publicity have not paid attention to the details and realised that this was going to show the whole North West what a sad carbuncle of a building it is, even stimulating nominations for other carbuncles.
They even showed the other Carbuncle Cup nomination, the Ferry Terminal and one of the interviewees declared that big white thing out of keeping which was the new egg-box museum.
IF THIS IS LIVERPOOL'S NEW TOMORROW, OUR NEW DAWN Then I for one am sleeping in. 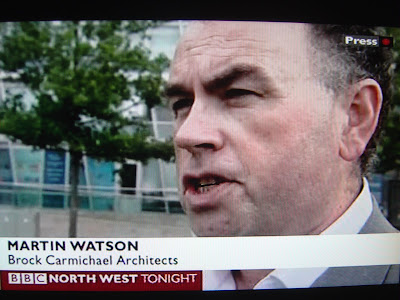 It went down like a sinking ship all who were interviewed on BBC give it a downer.
Except MARTIN WATSON from Brock Carmicheal, the "helper" to Cesar Pelli the pretentious and arrogant architect. He said
"It is very cool and very confident".
When asked about it being a carbuncle he said "Well, I mean that's personal opinion" Just, who do these architect people think they are as if because they have turned up to to college, whether they learnt anything or not, their opinion is right and others are wrong and here he was standing in front of a carbuncle with the whole of BBC North West laughing at him. I wouldn't have shown my face, never mind admitted to being involved in this, what is now being described as in the shape of a boat. The PR firm should be re-named Not Thinking Publicity because if a boat was this shape it would be upside down.......are they mad?
Ed Hall from BBC said "People are saying you have got a world heritage site, and The Three Graces of Liverpool and questioning if that should be next to them"
"I think it should" I fell off the chair laughing at the barefaced cheek of the guy masquerading as if he understood architecture behaving like a confidence trickster, pretending he knew what he was on about, he went on, "I think it is a well justified this design", I couldn't bear it I was doubled up and still there was more, "I think what it provides is a backdrop to the World Heritage Site and does not compete with anything on the WHS its all about city scale, rhythm, and texture on the facade".
No Mr Watson you have given us a dog and I wouldn't go around admitting it if I was you. In my opinion Mr Watson if you are a qualified architect and did in fact contribute to this eyesore you should be struck off for crimes to the architectural profession.

So they sent Richard Down out to cover it on behalf of the PR company the Daily Ghost writer. How come he gets all the PR stunt jobs. Dickie who recently said when I called him Richard Downer. "Great play on my surname by the way. Right up there with Eryl Roberts who first latched on to its comic possiblities in Penycae pre school".
Obviously his wet nurse nanny didn't teach him to be so outrageous it just comes naturally. Here is Dickie Downers piece. http://www.liverpooldailypost.co.uk/liverpool-news/regional-news/2009/08/20/hundreds-hug-grosvenor-s-underfire-flagship-apartment-block-one-park-west-92534-24486226/
Oh and here is a Correspondents, I know who was the true writer present.
http://condensedthoughts.blogspot.com/2009/08/hugs-from-mugs.html
Posted by Liverpool Preservation Trust at Thursday, August 20, 2009