Mike Storey. He Is Guilty Of Liverpools World Heritage Disaster.

I thought that Joe Anderson is good he has only been a leader of the council for a couple of weeks and he’s brought in the army to blow up the new museum and the black coffins that have destroyed the world heritage site.
I then bumped into Ed from the BBC who said the tank was part of the pageant of power he was reporting on and the closure of the Strand to show off all those super fast cars including a Lemans competitor. I spoke to him right in the shadow of One Park Worst, which he had reported for the BBC on the Carbuncle Cup nomination.
That was great he said we had a competition 'Name your Local Carbuncle' and we were swamped.
"Yes well there is next years Carbuncle Cup"  I said looking over to Mann Island. “We have lost it all” I said “Yes but the fight that you put up will go down in history” he said. Kind words. I looked at the tank a Challenger I think, thought about  it, No I thought they wouldnt leave any live rounds in....would they, one shot no more museum. Well lets get in to work I am already late. 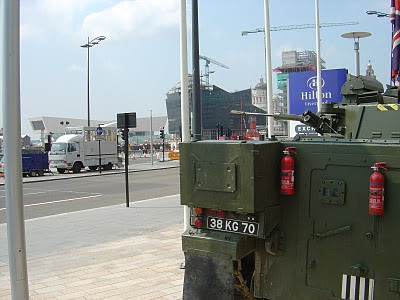 I went for a walk around Grosvenor-pool in the sun later on and talk about pageant of power, or ex power, I bumped into the current Lord Mayor, Mike Storey who wouldnt even look me in the eye. He turned away. Does he read the blog. Maybe he has a conscience and he feels guilty to the world heritage destruction that he started while being, in my opinion Liverpool’s Council leader property developer’s spiv, well before he had to resign in disgrace. He stood on Chavasse Park, the Park that he wrestled from Bill Davies to give to Grosvenor while acting as agent for the development. One Park Gone West. Or was he second in command to Clever Trevor Jones? Well the carbuncling has been done now. What is going to be his legacy. How will the Daily Ghost and the Oldham Echo put him down in history, they knew all about where Trevor Jones lived. It was a Daily Ghost journalist who told me Clevor Trevors address on the Duke of Westminsters Estate.  They let him off with it alright. Turning a blind eye...and Why? 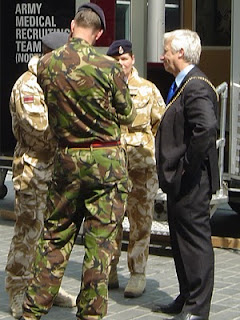 Posted by Liverpool Preservation Trust at Wednesday, May 26, 2010