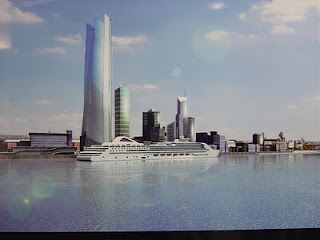 Here we have todays headline from the Putrid little excuse for a newspaper, The Liverpool Daily Ghost. (dead man walking will someone put it out of its misery). So up the behind of local property developers are they, that Stinky Ink Bartlett has been dispatched to to Cannes for the MIPIM Booze Cruise junket. We are not sure who paid his expenses but all week he has been reporting on Peel Holdings http://www.liverpooldailypost.co.uk/liverpool-news/regional-news/2010/03/17/around-1-000-new-jobs-to-come-to-liverpool-with-superport-plan-92534-26048018/  and Peel Holdings http://www.liverpooldailypost.co.uk/liverpool-news/regional-news/2010/03/17/mps-warn-liverpool-world-superport-scheme-will-be-hit-by-unfit-planning-shake-up-92534-26048019/

This time it’s a plan to illegally get rid of the Ferries and put in its place a cruise liner facility.
The Ferries are protected by law by an act of Parliament and still they try it on. Smoothed along by Stinky Ink and edited by "No" Mark Thomas you have to say the local papers are selling us down the river with their marketing of Peel Holdings on behalf of tax exile and owner of Peel http://liverpoolpreservationtrust.blogspot.com/2009/09/cruise-wars-liverpool-gets-full-naval.html

LIVERPOOL'S Pier Head could become a base for cruise liners under radical temporary plans to transfer business from a dilapidated dock.
Last year the Government blocked plans to make the waterfront location a start and finish base for cruise liners – forcing ships to continue using Bootle’s Langton Dock to access full "turnaround" facilities like baggage handling and passport control.

But officials from the Mersey Docks and Harbour Company, owned by developer Peel, are in discussions with the city council to temporarily transfer cruises from Langton Dock to the publicly owned landing stage at the Pier Head.
He stinks on Peel today insisted this was a short term solution as it wants to build its own cruise terminal as part of its £5.5bn skyscraper Liverpool Water scheme.
And on

Ian Pollitt, development surveyor for Peel, said the company was trying to find solutions to cruise liner companies having to use Langton Dock.
"What we are looking at now is a half way house. Rather than lose the business we are talking about relocating it to the Pier Head."
It is hoped the plan would avoid the need for any grants to be paid back as it would only be a temporary move.
Once Peel's terminal had opened the cruise liners would return to a base further up the River.
Peel's terminal is already fully designed and located near the 60-storey Shanghai Tower in the Liverpool Waters Scheme.

The tower would be built at Princes Half Tide Dock.
In the comments section.
Moriarty wrote:
Stuff Southampton and stuff Peel Holdings. Let's have our OWN terminal and put a stop to the 'St Johnification' of the waterfront. Enough is enough. http://liverpoolpreservationtrust.blogspot.com/2010/02/liverpool-waters-glass-pie-in-sky-we.html

They have stolen the iconic Skyline now they even want the world famous Ferries.
http://liverpoolpreservationtrust.blogspot.com/2009/12/liverpools-cruise-liner-cock-up-its.html
Posted by Liverpool Preservation Trust at Friday, March 19, 2010