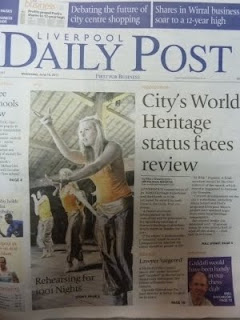 ﻿It must have hurt the editor of the Daily Post to have to print the front page against the full blight of its editorial stance and their  "plumping" for its business readers, of who I am advised there are.....well, more than a few less, than last year.
The city was told by Unesco at its 2008 and 2009 World Heritage committee meetings that, amongst other things, they must educate the public, as to the principles of its inclusion in the Unesco World Heritage Site list.
This it was felt would stop rogue councillors spiving for developers and stop the mess that was already in full flight.
Stop the binge build mentality that now sees us waking up to reality, with an almighty hangover.
A tacky application to the heritage lottery was made by John Hinchliffe our World heritage officer, for funding, yes him, with the backbone of a jellyfish, where world heritage is concerned.
I question why he is there, if not to facilitate the spivs and speculators who have got their mits on whats left of our historic fabric. There is a world heritage steering group, steering what?
http://whc.unesco.org/en/decisions/1252
http://whc.unesco.org/en/decisions/1722

http://whc.unesco.org/en/decisions/1922    Here are those decisions for your information.


We now have our historic buildings looking like aliens in the new urban settings.
Next to the likes of the three black coffins and its sister ship the new museum of Liverpool the Rome MAXXI lookalike, we have Three Graces, overpowered.

How many people can boast that they know where the world heritage site is?
Unesco said a a education programme as to world heritage priciples was required.
Lottery funding was refused and that was that then, no education at all.

http://liverpoolpreservationtrust.blogspot.com/2010/10/dear-john-mr-hinchliffe-you-are-trying.html
It seems that apart from being jockey-ed along, the local press don't know where the world heritage site is either, or don't care, although I liked Marc Waddingtons direct approach and his honesty when I met him recently.
But who wrote the opinion in yesterdays paper?
It has to be someone with a gripe against me, my contribution offering Amsterdam as an alternative inspiration to Shanghai for Liverpool Waters, was cut. That would not have suited his friends I think.
140 words, by me, ended up as 14.
http://www.liverpooldailypost.co.uk/views/liverpool-daily-post/2011/06/15/city-cannot-be-allowed-to-stand-still-92534-28879098/

In its place, was, as expected a plump for Peel Holdings.
I am reliably informed that Mark Thomas as editor went "Out to lunch" with Peel Holdings the week before last..............see the things you don't know can harm you.......it all makes sense now.
Mark Thomas has, as one of his favorite buildings, the Terminal Ferry Carbuncle, so we want no lectures from you Sir, where architecture is concerned. Here is what they said.
City cannot be allowed to stand still
http://www.liverpooldailypost.co.uk/views/liverpool-daily-post/2011/06/15/city-cannot-be-allowed-to-stand-still-92534-28879098/
NO MATTER what new additions have emerged on the Liverpool waterfront in recent times, there can still be little doubt that it is a site of extraordinary, spellbinding grandeur.
Nature itself is mostly responsible for the view, as the River Mersey ebbs and flows with unceasing splendour, at the heart of our city’s history – but the enthralling architecture of the Three Graces has done even more to make the waterfront one of the inspirational vistas to be found anywhere in Britain . . . or, indeed, the wider world beyond.
Yet the World Heritage Committee, meeting under the auspices of Unesco for ten days from Sunday, has placed an item on its agenda concerning “the state of conservation of the World Heritage property Liverpool”.
Speakers may well question the appearance of Neptune’s three glazed black wedges, at Mann Island, or raise the spectre of the huge Liverpool Waters development, which will transform derelict dockland to the north of the Pier Head site.
They may say that new developments spoil the panorama from this point or that point, or realign the perspective from a particular, favourite angle.
But can Liverpool truly afford to wrap itself up in cotton wool for generations to come? Our future lies in fostering jobs and investment to cater for the Liverpudlians of the future. People come from far and wide to savour our heritage, so it is undoubtedly important, but it is misguided to put at risk exciting, innovative job-creating developments for the sake of fossilising our waterfront for all time.
The loud and vociferous heritage lobby on Merseyside have become adept at raising the alarm over every perceived threat to the area – but they speak out of all proportion to the size of their membership. They surely do not speak for the vibrant business community, whose importance in safeguarding the future prosperity of our city cannot be underestimated.
Instead, they hanker for a heritage which is important, yes, but must be allowed to evolve in the best interests of Liverpool.
If the waterfront and everything around it stagnates because of over-exaggerated claims about new developments, investors will stay away – and our economy will stagnate along with it. That must not be allowed to happen.


In today's reporting reality we dont have to be fed by the local papers though and here is Correspondents take on the matter. http://condensedthoughts.blogspot.com/2011/06/decision-time-for-unesco-port-of.html
I know which one I prefer.
Posted by Liverpool Preservation Trust at Thursday, June 16, 2011