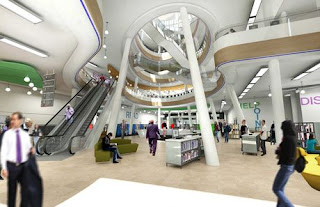 Well they have ruined the museum in William Brown Street part of the World Heritage Site, turning it into the Wacky Warehouse so why not destroy the Central Library and make it look like an Azda supermarket. It makes sense. Every little helps. It seems everything that this council, in my opinion, run by spivs, does, is a way of ruining the heritage of the city. Of homogonising it, turning it, into the same as everywhere else. Even its unique areas, its world heritage site. Its no good claiming that it is updating an existing structure, this does not look good, it looks very bad indeed. Not only have they got rid of all wagon loads of books from the library, selling off valuable first edittions to book dealers at knock down prices, they will now set about destroying the fabric of the structure, and the whole building. It will happen, with these proposals. Does no-one understand what heritage is in this city is, and how you merge old with new to create a sense of place and history.
Inspire Partnership has been named as the preferred developer, a collective that includes key investor International Public Partnerships, constructors and investors Shepherd Construction, city-based architects Austin-Smith:Lord and restoration specialists William AnelayCOR.


Building services engineers Buro HappoldCOR, asset managers Amber Infrastructure and facilities managers CofelyCOR complete the partnership.
The library is scheduled to be closed in June, 2010, and it will take around three months to completely empty.
The city council is about to finalise an arrangement with another city centre location to keep facilities accessible to the public throughout the closure of the building.
“We took a strategic decision that education is so important to the future prosperity of this city, and libraries are a finger on the hand of that,” said council leader, Cllr Warren Bradley., “While other councils have been streamlining, cutting costs and closing libraries, we have been investing.
“We have worked hard over the last six or seven years and are pleased we have now got a developer in place to deliver this scheme. This has been a long time in coming.”
He added: “On the back of Capital of Culture, we have invested £100m into the cultural infrastructure of the city.
“If you look at what’s going on with the [Everyman and Playhouse] theatres and what the museums have done, it’s phenomenal to see the investment in culture since 2008, and this is the icing on the cake.

This man really is dangerous the only reason he is placed in his position, in my opinion, was to allow people to faclilitate use of the huge European Slush fund, he talks about getting a developer in.......this is our library Mr Bradley not a speculative development sceme. He has waxed lyrical about every scheme that has come on board, carbuncle after carbuncle, he has backed, telling us how great everything is. My opinion is he is being puppeteered by Mike Storey still.
With Bradley in charge they can ruin what they want. With The Daily Ghost and the Oldham Echo as your PR company you have it made. http://www.liverpooldailypost.co.uk/liverpool-news/regional-news/2009/10/30/50m-liverpool-library-refurbishment-plans-unveiled-92534-25050438/ Vicky Anderson reports on behalf of the council this time.
To use your cultural assets in a manner, that does not undertand them is beyond belief. Housed in the Central Records office is the Chambre Hardman archive that I had a hand in saving for the city, while the Liberal Democrats, activly, campaigned to have 240,000 negatives of his work sent to Bradford and his house, now owned and run by the National trust, was to be closed.
When will this city ever learn.
A full planning application will be made on November 23and a four-week public consulatition event will be held in Central Library throughout December. 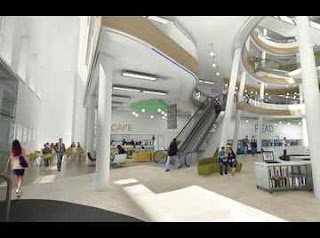 Its up to the public but with the spirit shown in the past it looks like its a done deal. Milton Keynes-On-Sea in a world heritage Mercantile and Maritime City, it just doesnt seem right.
CODA
I have just seen the front page headline of the Daily Ghost. "Stunning new £50m library sheme plan revealed". This has to be an editorial headline and it runs even with Mark Thomas style, describing the fantastic new Ferry Terminal and the stunning new museum. The Terminal Ferry building later went on to win Building Design National Carbuncle Cup Award.  http://liverpoolpreservationtrust.blogspot.com/2009/08/liverpool-wins-carbuncle-cup.html
Every tacky scheme that come along is pounced upon by the Daily Ghost and edited as a good news story with a lack of architectural education that astounds.
One of the main reasons the world heritage site is ruined to such an extent it is being laughed at by architectural cultured people is because of the quality of the local journalism and its lack of architectural knowledge. They cant even do the people right by taking an opinion, no wonder they cant even give it away.
Losing the Ghost paper, will be no loss really, it wont. What happened to inquiring journalists in this town.
Posted by Liverpool Preservation Trust at Friday, October 30, 2009