Only an Evertonian could have done this.

Building Design, the architect weekly has paid Liverpool a lot of attention in recent years.
With good reason.
2009 winner, the Terminal Ferry carbuncle at the Pier Head won the (un)coveted title of the worst bit of construction that year.
One Park Worst by Cesar Peli on Chavasse lawn came third.
The giant squashed ciggy packet and ROME MAXXI lookalike that is, The Museum of Liverpool also at The Pier Head designed by 3XN, who subsequently got sacked, came runner up in 2011.
To Peel holdings MEDIA City.
Media City Carbuncle Cup winner
The following year Liverpools Architectural tragedy The Three Black coffins on Mann Island,designed by Matt Brook of Broadway Malyan was runner up. 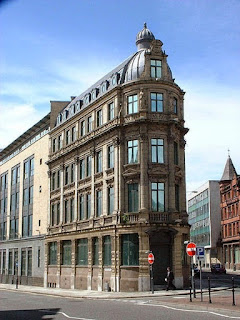 The nomination this year is The Shankly Hotel designed by Coco The Clown.
https://news.sky.com/story/uks-ugliest-buildings-revealed-the-nominations-for-the-carbuncle-cup-11484766
It even made Sky News.
We never nominated this year 2018 Nomination The Shankly Hotel Liverpool......we got beat to it. 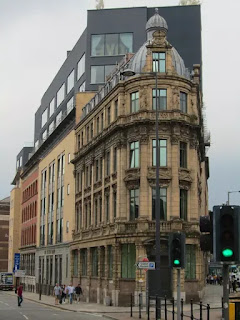 The beautifully detailed lead roofed, Louis XVth Style end of the block, with its Corinthian pilasters and its beautifully designed sculptures had already been butchered by the council to some extent for Millenium House.

But nothing could have anticipated what landed, on the top of the block.
The rooftop extension was constructed illegally by Kenwright as boss of Signature Living who seems to believe his own hype.
He then was made to submit a retrospective planning application after numerous complaints about him flouting the planning laws.
Mates with Fat Joe it was sure to be passed though.
The council has sold the building to Signature living to buy Cunard Buildings 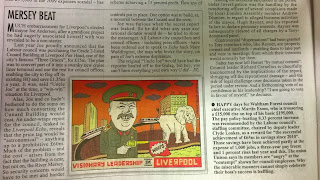 Anyone else would have been made to take it down.
Signature Living have threatened BD with legal action for what he called libellous comments.
Some people cant bear to hear the truth, and the truth is that this publicity seeking individual who runs the organisation is out of control, not only in his own mind, he always was a architectural disaster waiting to happen.
If he is not stopped he will help enable the city to be judged by the hen parties who are unfortunate enough to stay at his hotels as a blight on the city and the great heritage that we once had.
Oh hang on most of them are that pissed when they get here they struggle to find his hotel.
Man Glasssed at Shankly Hotel

This particular block styled as a flat iron to fit on the site was sold to Kenwright by Liverpool City Council, so they have to uphold his attempts at becoming Bob the Builder so they don't look even more stupid than they are.
How many deals are done under the counter these days by the Oligarchs who run the council?
How does Bob the Blunderer get away with providing such boring space and then getting it passed by the pathetic planners.
What is unquestionable is that Liverpool is now a architectural mess. If you don't like it don't read on. The waterfront is an architectural abortion and Liverpool retains its infamous badge of being on The World Heritage 'In Danger' list.
The clowns at the council run by Fat Joe are the least able people to judge architecture. So they should not be passing anything that hits the planning table.
The laughing stock that Liverpool is becoming in architectural circles, among those who can bear to look at the abomination that has happened is staying silent right now. They are scared to open their mouths for fear of being unpatriotic to the great city.
The more of you you that don't wake up to reality and show your mentality the more you will have people like Kenwright writing the articles for the Liverpool Echo and thus pulling the wool over the thick people who read it.

Lets hope The Shankly Hotel Extension wins the Carbuncle Cup award not only as a justified winner but as an example of what is befalling a city that now looks worse than when we had no investment. That is covered in high rise student flat carbuncles.

Only an Evertonian could do this, with the help of the Shankly family we have to add.
We think Bill Shankly will be turning in his grave.