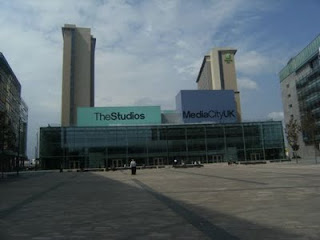 Yes, they, at Peel Holdings, managed it, an award for carbunculating Salford with an architectural atrocity that is that bad it even knocked the new Museum of Liverpool into second place in the same competition.
Media City Salford scoops the award for the worst development of 2011.
The BBC put a brave face on it with a little snapshot on BBC Northwest.
The regional director was asked about the Carbuncle Cup award for their new home. "Well it suited our needs" he said. Two years ago when the Terminal Ferry Carbuncle won and One Park Gone West came fourth, there was extensive coverage. http://liverpoolpreservationtrust.blogspot.com/2009/08/liverpool-wins-carbuncle-cup.html
They, at the BBC ran a series on name your carbuncle. Ed Thomas now on national BBC said it was great, it caused a sensation, tapping into something, the phone lines were on fire.
http://liverpoolpreservationtrust.blogspot.com/2011/09/museum-of-liverpool-runner-up-in-2011.html


"Which truly creative person would ever want to work in such a place?" The Guardian's Jonathan Glancey

A `crime against the built environment'… A `lack of urban vitality' are just some of the nicer things said about Peel Holdings' MediaCityUK site as it won Building Design magazine's Carbuncle Cup today – given to the year's worst building.
The sterilized Media City site even held off the squashed oblong that is the new Liverpool Museum to take the least coveted architectural prize in the country.

"…a city is the last thing one would mistake this development for"
http://www.salfordstar.com/article.asp?id=1084 You have to read the local opinion!!!!!!!!!!
They go on, on their firebrand style webspace that holds no punches and tells the truth.

Referring to the BBC's move to MediaCityUK, the Carbuncle Cup commendation states that "it is hard to see how the corporation could set its aspirations any lower… Following the Blue Peter garden's recent relocation to Salford, one can only presume that the newly reinterred Petra must be turning in her grave."

Yes, Peel Holdings' flagship "crime against the built environment" absolutely stormed the award for the worst building in the UK today. The jury - architecture critics, Rowan Moore of the Observer, Hugh Pearman of the Sunday Times and the Guardian's Jonathan Glancey – were unanimous in their verdict that the £600million Salford Quays site visually stinks.

The commendation states that Media City "had every opportunity to be a piece of city to be treasured for centuries to come". Instead we got "a crazed accumulation of development, in which every aimlessly gesticulating building sports at least three different cladding treatments. The overriding sense is one of extreme anxiety on the part of the architects - an unholy alliance of Wilkinson Eyre, Chapman Taylor and Fairhursts."
It adds that "There is no urban idea to speak of whatsoever - no space that one might recognise as a street; no common architectural language; no difference between the fronts and backs of buildings; no distinction between the civic buildings and the private ones…"
It concludes: "No-one can be too surprised that Peel Holdings…is behind MediaCityUK but quite how the BBC has stooped this low is hard to fathom..."