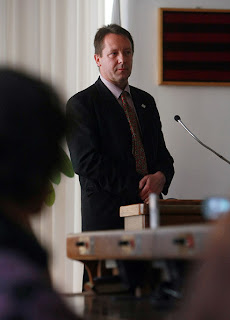 This is the man who got us on the World Heritage "At Risk" Register, then like a rat jumping ship, he buggers off and take the redundancy money.
You have to question the credibility of a man who has been a complete waste of space. Who has stood idly by while the Pier Head was decimated with modern rubbish and he was paid to defend it all.
Lets hope he can sleep at night.
Where was he when they destroyed Manchester Dock?
Nowhere hiding under his desk.
Where was he when they filled in Trafalger Dock?
Same Desk.
Where was he when the plans were passed for the three black slugs at mann Island.
Negotiating with the developers instead of laying down in front of the bulldozers.
On World Heritage matters he had Backbone of a jellyfish, a poodle who liked getting his tummy tickled by the developers.
He was a plant by the previous council administration who as soon as the ink was dry on the WHS inscription set about destroying it.
Lets hope he can sleep at night.

So Uncle JOE ANDERSON Has now removed another  obstacle for Peel Holdings.e


Here is a compilation of some of his worst bits.
He was flown over to Shanghai at the cost f 6 grand to tout the destruction of the WHS

He is a complete waste of space very often working against the public who pay his purse http://liverpoolpreservationtrust.blogspot.co.uk/2011/11/john-hinchliffe-tries-to-shaft-us.html


He was supposed to educate the public but lacked the education or the gumption himself
http://liverpoolpreservationtrust.blogspot.co.uk/2011/06/liverpools-world-heritage-education-nil.html

One thing he was good at was shuffling paper

Was he paid by English Heritage
http://liverpoolpreservationtrust.blogspot.co.uk/2011/02/english-heritage-slam-liverpool-waters.html

He was a poodle for Council Leaders with "cosy" developer friends
http://liverpoolpreservationtrust.blogspot.co.uk/2010/10/world-heritage-steering-group-what.html


A COMPLETE WASTE OF SPACE


BUT WHO IS NOW GOING TO REPLACE HIM probably another compliant who will be just as bad.......how convenient for Peel Holdings.

Posted by Liverpool Preservation Trust at Thursday, October 18, 2012 No comments: Links to this post 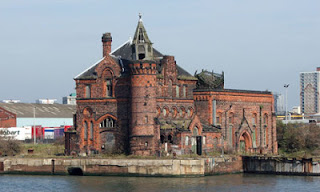 
A palatial pumphouse, an immense stone spillway and a London roundabout are among the 10 most threatened Victorian and Edwardian structures in England and Wales, according to a list published on Wednesday.

The list, compiled by the Victorian Society, also includes an abandoned railway station in Derbyshire, an ivy-shrouded mortuary chapel in Salford and the country's first lending library, housed in Swindon's Mechanics Institute – all of which have fallen into a shocking state of disrepair.
The publication follows a widespread appeal to find the best and most at risk buildings in England and Wales, with historians, enthusiasts and local campaigners suggesting endangered structures in their area.
"The public responded enthusiastically to our call for threatened buildings," said Chris Costelloe, director of the Victorian Society. "It shows the public cares – but it also shows there are still too many historic buildings at risk, without recognition or protection."


So while Peel Holdings are telling us how wonderful it will be to have Liverpool Docks turned into yuppie flats this is the reality, quality buildings going to rack and ruin.
We broughtthis to the attention of HenryOwen-John who passedit over to Graham Ives of the English Heretics who have stood idly by as it slowly gets worse.
It is in Sefton Council juristiction and their conservation officer seems worse than Steve Corbett the bunch of conservation (sic) officers who do nothing at Liverpool Council.
Posted by Liverpool Preservation Trust at Thursday, October 18, 2012 3 comments: Links to this post 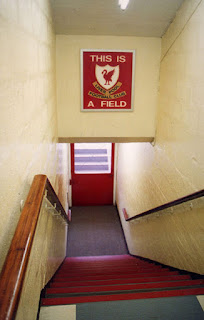 ﻿It used to be a lovely area in the 60s. Yes it was poor, but the people of Anfield were proud. There was a community spirit in Stanley Park with its boating lake and its huts that were used in the summer holidays to run drafts and chess classes for children.


There used to be a massive clock set in a small raised ground area, made of flowers sponsored by Ogden’s the local tobacco manufacturers. The hands of the clock used to move at 12 pm. People used to gather there for the event on a sunny day.

The poverty was real, parts of the area was a slum area for sure, there were still bombed buildings from the war, but gradually some of the houses around the ground come up for sale. Absentee landlords who had in fact commissioned roads on mass had owned huge swathes. These houses had a lifespan and they needed a refurbishment.

But then Liverpool football club started buying up property in the immediate vicinity to Anfield and boarding them up. In the 70s and 80s they were ruthless in their approach. It was claimed they would just wait for the people to die and then make an offer over the odds that could not be refused. We are talking about seven grand at the time, the same house would sell for between ten and twenty times that price.

While Liverpool’s financial fortunes crested to sums that are beyond the imagination of many of the working class people in the city, the football club watched with no community spirit. Fending off claims with their lawyers from aggrieved citizens who felt helpless, even though the support for Liverpool Football Club was and is in the hearts of these people. BUT NOW SOME SAY........... THIS IS A FIELD..

So while Liverpool FC pay out wages of, it is said, £60,000 a week to some players they spent less than sixty quid on the area that they own until it is to the stage when one can say…………..
It is a disgrace what Liverpool Football club have done to the once proud community of Anfield.

Now Joe Anderson and Co have got together for another press release stating that the city council and Liverpool FC are now to redevelop the area.
http://www.liverpoolecho.co.uk/liverpool-news/local-news/2012/10/15/liverpool-fc-to-stay-at-anfield-timeline-of-the-lfc-stadium-saga-since-2000-100252-32027261/
How many times have we heard this? At least the stupid plan to build a new stadium on Stanley Park appears to have been scuppered.

So the local journalists many of them to young to recall the empty promises of past years lap it up, and hey presto the area has a positive spin on it.

Two months ago someone daubed, in thick white paint on the gable end of a building in full prominence
JOE ANDERSON IS A TRAITOR………this was removed within the day and was not mentioned in the local press.

So when hearing about another area that is to be errrrrrrr…. regenerated remember that Liverpool Football club speaks with forked tongue and we have heard it all before and the franchise, as the American owners say, is more than that to some people it is their lives their existence.
If the greedy fat cat executives at the football club http://www.liverpoolecho.co.uk/liverpool-news/local-news/2012/10/15/liverpool-fc-managing-director-ian-ayre-hails-massively-important-day-for-lfc-and-whole-anfield-area-100252-32034196/ were made to live there for a week they would soon realise the damage that Liverpool FC along with consecutive council leaders have done to this once proud area.

Some poor unfortunate people of the Anfield area may think and believe regeneration is a matter of life and death...... but to some it is more important than that, its a press release to help their careers.

Posted by Liverpool Preservation Trust at Wednesday, October 17, 2012 No comments: Links to this post

Cllr Malcolm Kennedy Spins Marc Waddington another One...Just Like The Other One. 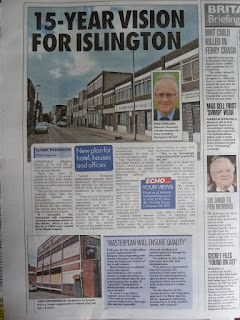 ﻿When are the local hacks going to realise that they are not PR for the council and are not there to make councillors look good with empty promises and PR spin.

This time its Marc Waddingtons turn to make Malcolm Kennedy, Liverpools Regeneration officer (who has not regenerated anything but his own career)  look good, with twaddle about a fifteen year plan to transform Islington.

He says:
LIVERPOOL’S Islington district is in line for a multi-million pound face lift over the next decade.
There are plans to transform up to 1.5m square metres of land with hotels, houses and offices in a bid to revamp one of the main routes into the city.
The council and developer Downing hope that the growing demand for high-quality student accommodation and the need for homes for ‘key workers’ like nurses and doctors will help stimulate the project.

All speculation Mr Waddington, but there you are making the council look as if they are doing good, getting all the (rigged by the council) comments section on the corrupted Echo website wound up, on Downing developments behalf.

http://www.liverpoolecho.co.uk/liverpool-news/local-news/2012/10/04/15-year-masterplan-for-regeneration-of-liverpool-s-islington-gateway-100252-31962120/
(Our understanding is that the credit crunch started in 2008 Marc).
Are the council somehow subsidising Downing?

So why are we being spoon fed with half thought out ideas by Marc Waddington and co at the Oldham Echo about creating jobs, when they have just put all the Merseymart delivery boys out of a job.
All those old blokes who used to be kept busy with their trolleys, are now down the pub every Thursday and Friday drowning their sorrows with nowhere to go just because they now give it away free in the Echo........... er, hang on......... you have to buy an Echo to get a free paper.

It just gets worse.
Soon you will get a free Post in the Echo and its likely it will be full of he sae old ouncil spin that nobody believes anymore.


Posted by Liverpool Preservation Trust at Friday, October 05, 2012 No comments: Links to this post

Email ThisBlogThis!Share to TwitterShare to FacebookShare to Pinterest
Labels: Daily Post, Malcom Kennedy, Oldham Echo
Newer Posts Older Posts Home
Subscribe to: Posts (Atom)
"THESE OLD BUILDINGS DO NOT BELONG TO US ONLY;...THEY HAVE BELONGED TO OUR FOREFATHERS AND THEY WILL BELONG TO OUR DESCENDANTS, UNLESS WE PLAY THEM FALSE.