Liverpool Ferry Terminal wins Carbuncle Cup 2009
28 August 2009
By Amanda Baillieu
Despite strong competition from a record number of entries, this year’s winning building by Belfast-based Hamilton Architects is a shining example of bad architecture and bad planning
This year architecture’s only prize for sheer downright ugliness has seen a record number of entries: buildings so drab, hostile, or puffed up with their own self-importance they made you queasy, angry and depressed.
Many of you wailed at opportunities lost, egos gone unchecked, or sheer downright laziness, while others wanted the prize to go not simply to the architect but to the clients and the local authority that waved these hideous schemes through planning. http://www.bdonline.co.uk/story.asp?sectioncode=430&storycode=3147432&channel=783&c=2
The winner is the building that shows how bad architecture and bad planning can combine to produce something truly awful — a building so ugly it can turn human flesh to stone or at the very least make grown men cry.
These arguments only got going when it came to deciding an order for the final three: Make’s Amenity building for Nottingham University, Belfast-based Hamilton Architects’ Ferry Terminal in Liverpool and Queen Margaret University campus, Lothian by Dyer Associates.
In the end the three judges, BD’s buildings editor Ellis Woodman, BD columnist and critic Owen Hatherley and architect Sean Griffiths of Fat were split between the Nottingham and Liverpool buildings.
Both buildings are appalling, they said, but after much deliberation they decided that, given the damage inflicted by the ferry terminal on what is a Unesco world heritage site, it was the more worthy recipient.
“It is such an amazing site, directly in front of the Three Graces, but the architects seem barely to have noticed. It is like letting a bad second-year student build next to St Peter’s,” said the judges despairingly.
“This is bad patronage by an ignorant council which thinks having jazzy architecture is putting the city on the map again.”
Completed this summer by Hamilton Architects (not to be confused with Hamiltons) the £9.5 million building incorporates ferry operations, a Beatles museum and a rooftop restaurant. It is cantilevered on two sides and clad in limestone to complement the new Liverpool Museum next door.
“The architect evidently once looked at a Zaha building in a magazine,” said the judges. “It is essentially a horrible sectional idea that has been extruded like a stick of rock. The long elevations couldn’t be more tedious, the Dr Caligari end facades no more grotesque. When you go there you think: oh no, I can’t believe they’ve done that. 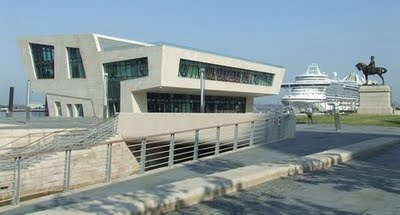 Were back on centre stage after all the investment in the city over the past decade we were told the new dawn had arrived and we were there to compete with the rest of the world proudly proclaiming our new found status as European Capital of Culture, Mercantile and Maritime World Heritage Site. Well that's what they told us only the pathetic twassers running the place did not have the talent or the education to compete on a footing that fitted the charitable status bestowed upon us to pull us out of the doldrums to make us a city worthy of the people who live here.It is such an amazing site, directly in front of the Three Graces, but the architects seem barely to have noticed. It is like letting a bad second-year student build next to St Peter’s,” said the judges despairingly.
We now have another accolade as if to prove it 2009 winner of the Building Design Magazine Carbuncle Cup. Yes that new Terminally ill designed Ferry Terminal in the middle of the world heritage site that the Dame of Disaster Doreen Jones passed.
http://badbritisharchitecture.blogspot.com/2009/07/pier-head-ferry-terminal-liverpool-by.html Please read this link.
The Architects Journal have had a debate also http://www.architectsjournal.co.uk/beauty-or-beast-new-liverpool-pier-head-ferry-terminal/5204487.article which was the most commented article for a while.
John Hinchliffe the invisible World Heritage Officer said it was his favourite building.....there is no chance really with people like this looking after world heritage.
http://nemesisrepublic.blogspot.com/2009/08/liverpools-mighty-minger.html
Nemisis is familiar with the building and has a architectural knowledge that I respect.
Mark Thomas Daily Post editor said it was fantastic http://www.ldpeditor.merseyblogs.co.uk/2009/07/penguins_superlambananas_-_and.html but it has been reported in todays paper .http://www.liverpooldailypost.co.uk/liverpool-news/regional-news/2009/08/28/architecture-critics-name-liverpool-ferry-terminal-uk-s-worst-new-building-92534-24551826/
Warren Bradley even has the cheek to defend it he is such a blag. Bringing out the old "There was controversy when they built the Liver Building" crap that he readily bandies about to anyone uneducated enough to listen and there are some who have believed him. There is no evidence for this at all.
We said it was a dog and a minger and now the fellows who understand architecture and design confirm our worst fears that we have a carbuncle for all to see bang slap in the middle of the world heritage site to show the world that we cocked it up that the missed opportunity that has left us with an eyesore.http://liverpoolpreservationtrust.blogspot.com/2009/07/liverpools-ferry-terminal-bad-british.html
I was there at the planning meeting arguing against this. When the criminal Councillor Steve Hurst tried to stop me talking and giving advice to the planning committee on just how bad this carbuncle was to be when erected. Maybe if the planning office and its rubber stamping planning committee poodles, playing politics with our world heritage site listened, we wouldnt be in such a mess.
Posted by Liverpool Preservation Trust at Friday, August 28, 2009