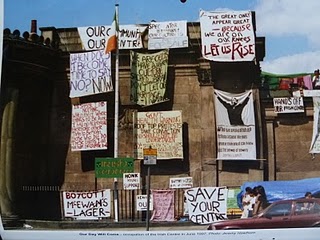 They at the City Council talk of Regeneration and even have a Regeneration Officer appointedbyJo Anderson called Malcolm Kennedy, who it appears, to my mind, is so wrapped up with Peel Holdings that he cant see the true nature of our citys historic past.


What is the point in letting this historic building rot.
Here is a picture taken in 1989 by Jeremy Hawthorn, I hope he won't mind me using it.
I am revisiting a plea I made years ago.
click on the pic as a demonstration to save the buildng was unfurled all over it
It was on a calender that was published by The Nerve a local magazine that does its best to highlight some of the rubbish put out by council spin doctors. http://www.catalystmedia.org.uk/
How can this building be left to rot after a billion pounds of European objective one funding has been swagged to the cronies who have contacts in the North "Vested Interest" Development Agency.

http://liverpoolpreservationtrust.blogspot.com/2010/06/joe-anderson-to-save-liverpools.html  What will Joe Anderson the Tory Cuts Reaper do.
Here is Correspondents take on the situation.
http://condensedthoughts.blogspot.com/2011/01/joe-anderson-implements-tory-cuts.html

The Wellington Rooms in Mount Pleasant were once described as a ‘house of mirth and revelry’. They were erected after funds were raised by public subscription in 1815.
An Adaptation of the Choragic Monument of Lysicrates of Athens, which was illustrated in the influential publication by Stuart and Revelt Antiquities of Athens.
It had a porch on one side for the setting down of sedan chairs.
The Portico was originally open but was found to be draughty and a disfigurement to the original design was made with the blocking up.
A ballroom of some 80ft by 40ft it had a card room and a supper room.
It was thought to have been frequented by the upper classes, as subscription balls, assemblies and occasional fancy dress balls.
How that description conjures up the most remarkable images of Georgian Liverpool. A Maritime City at the nucleus of its upward growth taking it to the city of its height in the early 20th century.
I grew up with it being known as The Irish Centre in the 70s and 80s, and ignorant of these facts relating the building back to the Battle of Waterloo and Napoleons defeat by the then axis powers under the leadership of the Duke of Wellington.

It was 2008 that I highlighted its plight in a walkabout with Peter Elson. And this Georgian gem still rots.
http://www.liverpooldailypost.co.uk/liverpool-life-features/liverpool-special-features/2008/01/29/living-on-the-eve-of-destruction-64375-20405391/  This was for the Daily Ghost.
The deterioration seems to have been helped by the lead on the roof going missing. What state inside to the plasterwork?
There were ghastly plans to develop it by sticking a rubic cube sort of extension on the back, this was done by a consortium of Flanagans, the local builders.
Did one of the Flans go to Shanghai as a guest of one of the senior, very senior members of the council.
The plans looked more like a sketch on the back of a jerry-builders ciggy packet than a professionals work . http://www.liverpooldailypost.co.uk/liverpool-news/regional-news/tm_method=full&objectid=20615285&siteid=50061-name_page.html

On the English Heretic at risk register for as long as I can remember. Henry Owen John http://www.liverpooldailypost.co.uk/liverpool-life-features/liverpool-special-features/2008/03/22/the-changing-face-of-liverpool-64375-20658839/  the area director should be ashamed of himself as should the joker who was the Historic Buildings advisor Peter De Figeurido who let it rot while sucking up to the developers of Mann Island, who it is alleged is now working for Peel Holdings.
Click the link above to see him and the Reichmarshal Nigel Lee making excuses after my article sent waves out about the neglect. Waffling on about the joke about Liver Building Controversy.
While today the Royal Liver is to leave its spiritual home. http://www.liverpoolecho.co.uk/liverpool-news/local-news//tm_headline=jobs-axed-as-royal-liver-head-office-in-liverpool-to-close%26method=full%26objectid=29196403%26siteid=100252-name_page.html With the loss of 110 jobs. Now there is contoversy.

http://www.english-heritage.org.uk/upload/pdf/190609north_west_2009_har_register.pdf
And what of Chris Griffiths and Steve Corbett of the useless Liverpool Conservation office.
Next to it and with objective one funding an extension was built on the Gibbard Cathedral, that Oscar Niemeyer rip off, Paddys Wigwam while this wonderful little Georgian gem lies there, rotting, a forlorn looking Mausoleum to Liverpools Regeneration Con.

A disgrace. The Council Have Powers to Save This Historic Gem.
Posted by Liverpool Preservation Trust at Monday, August 08, 2011