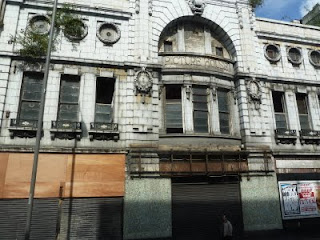 Regeneration, Regeneration, Regeneration.
We even have a Regeneration Officer (Code for lets help Peel Holdings) by the name of Malcolm Kennedy.
Those in charge of Regeneration seem to concentrate on all the easy jobs while the old stock falls down.
The Futurist, that's Ironic, is a mess, left to rot while being so close to the world heritage site it may as well be in it.
Last I heard it was being left to fall down by Neptune Developments who wanted to develop the site. On one end of this block we have the Grapes (this block is next to the Adelphi) and the other end the Vines, both listed buildings because of their architectural merit. 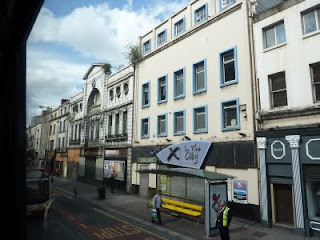 While we are being spoon fed about Liverpool's (false) new dawn those in charge of Regeneration watch while whole blocks lay in decay. Is it a tried and tested plan. Let it fall down, the city council wont use their powers to have the building kept in a good state of repair. Then the developers claim it is in such a bad condition that the only thing to do is knock our historic pieces of architecture down and then build a modern block of flats. Just to the side of this is the Grade II listed ABC Cinema that those Urban Splash people said they were going to restore ......and then didnt, is rotting away.
http://www.liverpooldailypost.co.uk/ldpbusiness/business-local/2010/03/22/urban-splash-reaffirms-commitment-to-liverpool-lime-street-and-southport-s-pleasureland-92534-26081951/


As is Littlewoods on Edge Lane that we saved from demolition, only to see it lay empty.
http://liverpoolpreservationtrust.blogspot.com/2010/07/there-was-scheme-to-relocate-school-in.html

If only those in charge of Regeneration really were genuine and sincere in the job in hand and stopped dodgy developers in this city letting our historic architectural stock fall down by serving them repair notices.﻿
Posted by Liverpool Preservation Trust at Monday, August 22, 2011