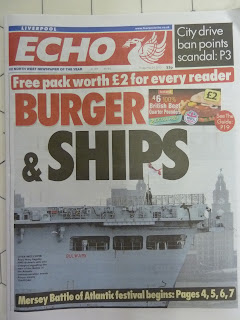 This is todays headline from the paper that claims so much.
It's sunk to an all time low today with a headline of BURGER & SHIPS at the start of The Battle of The Atlantic commemorations this week. Burgers &; Ships?
It is outrageous that those in charge of how we present ourselves as a city, and a city, that did so much during the war to eradicate the U-Boat threat. (thye city that also allowed Neil Scales to cut up U534 rescued from a Norwegian Fford) now finds itseld represented at an all time low.
This is the responsibility of the editor, the uncultured Alaistair Machray who has shown himself repeatedly to be making the paper, that he claims to speak up for people of Merseyside, to be no more than The Sun.
Here it is, giving burgers away with what must be one of the worst tasting headlines we can remember.
To allow the front page to turn into an advertorial  this week should be a boycottable offence.
You should hang your head in shame Mr Machray, if you know what the word shame means.
Is this the best you can do, to honour those heroes who were on the Arctic convoys in blizzards fighting for freedom..................so you can dishonour them by giving away a free burger in an advertorial.
How did you get confused with anIcelandic Convoys and a free burger from Iceland?
You have shown us up.
Those men, yes real men, not soppy little ponces who complain if the central heating isn't working, but men who had to endure hardships unfathomable in today's age, risking their lives for freedom.
So clowns like you could discredit their endeavours seventy years or so later.
You should be ashamed of yourself, you have also let down all those hardworking journalists who had compiled a moving and dignified way of displaying our gratitude to the dead and the families of the dead and the Naval service as whole.
At first glance the thoughts were that it may be an outrage that there are takeout vans down at the Pier Head and these have no place there. 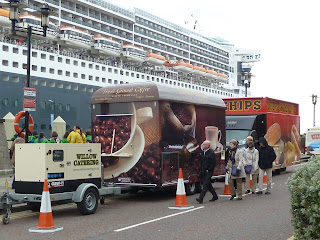 The sort of thing that The Oldham Echo's hard working shipping correspondent Peter Elson campaigns against.
To make a good impression, to the flocks of people who now get off at the Landing stage when Cruise Liners arrive, but the first thing they see are burger vans.
But no.
This paper should be boycotted for this outrageous level of disrespect fot the fallen navy personal and the Merchant Seamen who perished, some of who froze as soon as they hit the icy waters of the Atlantic. Who spent months at sea fighting cat and mouse games with a formidable foe. 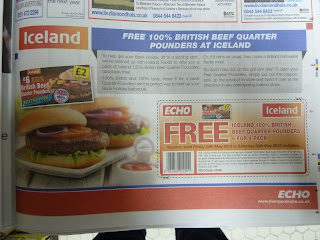 But no, get your free quarter pounder courtesy of Alaistar Machray and Co down at the disgusting little paper that shows no respect for people who did real work, risking thier lives.
And those journalists down at Oldham Hall Street that never stop whining about being overworked while they are deleting things from articles that may give the right impression to the public, take a hard look at yourselves.
You don't know what work is, sitting there in your air conditioned office. Remember the people that you today dishonoured with a disgraceful headline, fought, some of them fought and lost, with their lives for your freedom, so you can say what you like.
God help us there must be thousands of mariners today turning in thier icy graves in the dark depths of the Atlantic who thought they were fighting for your freedom.

HANG YOUR HEADS IN SHAME.
Posted by Liverpool Preservation Trust at Friday, May 24, 2013