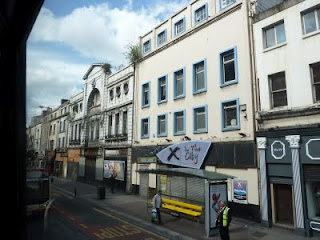 Or does he just give them the chance to defend the atrocious mess that is Lime Street?.
We have been banging on about this for years.
This block is ended by two listed buildings The Grapes public hous and the Vines.
Bartlett writes;
A FIVE-YEAR masterplan will attempt to revitalise Liverpool’s Lime Street.
City regeneration leaders admitted the road and neighbouring Renshaw Street are top of their list of priorities after becoming blighted by numerous derelict properties.
They have relaunched a joint venture company called Regeneration Liverpool, with Sigma In partnership, which will develop at least five sites across the city.
Lime Street and Renshaw Street is one of those projects and the company has already been tasked with drawing up a masterplan.
Between 2007 and 2010, £35m of mainly public money was lavished on improvements after Lime Street station was rated one of the worst in the country.
It involved knocking down the eyesore Concourse House and a row of shops in front of it, with the public square built at the main entrance in their place.

Read more http://www.liverpooldailypost.co.uk/liverpool-news/regional-news/2012/08/09/derelict-and-forgotten-does-liverpool-s-lime-street-have-a-future-99623-31579623/ Wayne informs me he spoke to David last week and highlighted Liverpools need to regenerate the Central Docks while Lime Street lays derelict and fair enough he has sharpened his pencil and got a story out highlighting the need to regenerate this area..............It does not mention the need for regeneration In a sympathetic manner though.
Malcolm Kennedy who has not regenerated anything also gets some air.to regenerate his career he says;

Cllr Kennedy said Lime Street’s problems stem from it previously not being seen as a priority and the fragmented ownership of properties, an issue which also affects Renshaw Street.
He said discussions around what the masterplan will entail are at a sensitive stage and could not release exact details.
But he added: “Everything needs to be smartened up. Some buildings may have to go and new buildings put up. It is about transforming the area and that goes beyond a simple clean-up.”
Some take the view that areas around the main train station in many big cities around the world inevitably show their grubby underbellies, so should Lime Street be left as it is?
“No, not at all,” said Cllr Kennedy firmly.

We even have a Regeneration Officer (Code for lets help Peel Holdings) by the name of Malcolm Kennedy.
Those in charge of Regeneration seem to concentrate on all the easy jobs while the old stock falls down.

The Futurist, that's Ironic, is a mess, left to rot while being so close to the world heritage site it may as well be in it.

Last I heard it was being left to fall down by Neptune Developments who wanted to develop the site. On one end of this block we have the Grapes (this block is next to the Adelphi) and the other end the Vines, both listed buildings because of their architectural merit.

While we are being spoon fed about Liverpool's (false) new dawn those in charge of Regeneration watch while whole blocks lay in decay. Is it a tried and tested plan. Let it fall down, the city council wont use their powers to have the building kept in a good state of repair. Then the developers claim it is in such a bad condition that the only thing to do is knock our historic pieces of architecture down and then build a modern block of flats. Just to the side of this is the Grade II listed ABC Cinema that those Urban Splash people said they were going to restore ......and then didn't, is rotting away.

If only those in charge of Regeneration really were genuine and sincere in the job in hand and stopped dodgy developers in this city letting our historic architectural stock fall down by serving them repair notices.

Another page filler from the Daily Ghost last year went no-where.
http://www.liverpooldailypost.co.uk/ldpbusiness/business-local/2010/03/22/urban-splash-reaffirms-commitment-to-liverpool-lime-street-and-southport-s-pleasureland-92534-26081951/
So where will this story lead to not more public realm money wasted on naff rubbish public art. Lets hope not.

The article mentions the demolition Concourse House, heres what we say One step forward and one step back. Dont forget they kncocke it down and built the most awful block, breze block of student flats imaginable. 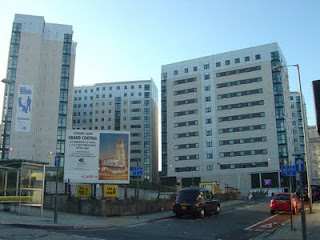