A Star For India Buildings-English Heritage Upgrade to Grade II* 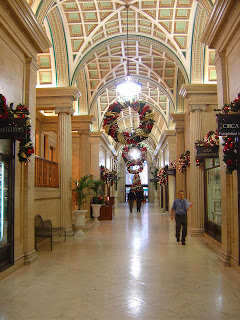 
This is a momentous decision.
It has been recognised that the historic India Building with its majestic travertine marble Holts Arcade should be upgraded.

An application was made after the owners of the building Green Property Group removed historic fitments from the façade without planning permission and were cautioned by Liverpool City Council who sent enforcement officers to the property who also ordered the bronze plaques to be re-instated.

A campaign was organised by some of the shopkeepers after they were told that the shops that they had tenanted for decades were to be converted into offices and the public right of way was to be stopped up.


Holts Arcade is on the site of an ancient right of way and was built as an arcade because there were originally two buildings on the site and by creating the right of way solved the issue arising from unlawfully stopping people who had used this street.


Plans were recently announced and submitted to the planning authority.

The local authority accepted the plans for the building even though a listing application was pending.

The announcement means that English Heritage has to be consulted on all planning applications.

It is wildly anticipated that the plans that include putting TV screens and monitors in Holts arcade and reducing access by fitting a revolving door at the Water Street entrance will be treated with the contempt they deserve by EH.

The plans show some of the shops converted to offices which would be a tragic use of a shopping arcade that was designed by Herbert Rowse one of Liverpool’s most famous architects, who also built Martins Bank and The Art Deco inspired Georges Dock Ventilating Shaft along with the Philharmonic Hall in Hope Street.

The original India Buildings built to commemorate the breaking up of the East India Company was the headquarters of Holts Line.

This is a historic day for Liverpool as recognition of its Mercantile and Maritime past.

The building is in the WHS.

This is a glowing confirmation of one of Liverpool’s greatest Architectural monuments.


India Buildings and in particular one of the shops Wayne Colquhoun Antiques and Fine Art will be featured on BBC Friday 15th November 2013 when Edwina Curry makes a visit for charity.

See whether you think the shopping arcade is not important to Liverpool’s sense of place and its encroaching homogenisation.

It is a pleasure to thank Clare Price of the c20 society who are the nations experts on 20th Century architecture. Her work in submitting this listing upgrade application was carried out in a most professional manner and was backed up by the society.


The Liverpool Post and Echo also have to be thanked because they covered the news in a sympathetic manner and in particular the work of Peter Elson, which went above and beyond his call of duty.

His reporting meant that the campaign went to people who were determined to lend their weight and support to the SOS (Save Our Shops) campaign.

The campaign to save India Buildings made Private Eye and Green Property were criticised.

The Merseyside Civic Society submitted comments to the listing application.

And of course those who turned up to reminstrate and demonstrate against the owners plans to close off the arcade.

1000 signatures were made on a petition to Save Our Shops.

It was bad enough damaging a Grade II listed building but the merits of it being Grade II* were the same then as they are now, all that has changed in the quality is that the building has been recognised as being worthy of the top tier of historic structure in the country. Only a very small number of properties can boast to be on this table.

Radio Merseyside sent reporters out and it was featured on Mersey TV.

The assessment for English Heritage stated.
Like the buildings of the northeast US cities, India Buildings' imposing architectural effect and beauty is achieved by its impressiveness of mass, and its clean surfaces and proportions, rather than ornamentation.

The building's external elevational treatment rejects the over-ornamentation and fussiness of many buildings of this date, and instead adopts a more restrained approach with decoration concentrated in selective elements judiciously placed at the top and bottom of the building. The result is a building that is enhanced, rather than taken over, by decorative enrichment, and which reinterprets classical styling in a modern way. In achieving this, India Buildings again reflects its transatlantic influence, and in particular, the buildings of New York City. As Reilly proclaimed about the winning design in 1923: 'with the Holt Building the American orientation of Liverpool architectural thought reaches its climax. The building Messrs. Thornely and Rowse have designed would not disgrace Fifth Avenue; indeed it would sit there very happily, and those who know most of modern architecture will know this is very high praise' (cited in The Builder, 12 Oct 1923). In keeping with the exterior, the building's interior is also of a superior quality and displays an acute attention to detail with high-quality finishes and materials found throughout, including an extensive use of Travertine marble and terrazzo. Several areas are of particular note, including: the elevator halls with their Travertine-lined walls and coffered saucer-domed ceilings; the central arcade with its coffered barrel-vaulted ceiling and decorative bronze shopfronts; and the opulent Lloyds Bank interior, which is a tour de force of marble and decorative metalwork, as well as incorporating abundant figurative and symbolic imagery and an impressive coffered ceiling with coffers that mirror the octagonal shapes of the building's corner lobbies. Like most commercial buildings India Buildings has been subject to interior alteration over the years, including repairs and restoration following wartime damage, which were overseen by Rowse himself and in most cases are virtually indistinguishable from the originals. Some of the upper floors have since been modernised and late-C20 mezzanines have been inserted in the banking hall and ground-floor office space. However, whilst these latter alterations have not added to the building's interest, neither have they significantly compromised it; where applicable, areas of the building that are not of special interest, or are of lesser interest, will be
identified in the List description.

Herbert J Rowse is one of the most influential regional architects of the inter-war period and his impressive body of work encompasses a wide range of building types, many of which are listed. Rowse's great skill as an architect is demonstrated by the fact that he already has two buildings listed at Grade II*: the former Martins Bank (1927-32), which lies diagonally opposite India Buildings, and the Philharmonic Hall (1937-9). Like these other examples, India Buildings possesses a high level of architectural quality that is of more than special interest within a national context. It also has additional significance in being the building that launched Rowse's acclaimed career. Like Rowse, Sir Arnold Thornely is also a significant figure within Liverpool architecture who has several highly graded listed buildings to his name or associated with him, including the Grade II* Port of Liverpool Building (1907) and Bluecoat School (1903-6), and the Grade B listed Parliament English Heritage Advice Report 04 November 2013 Page 3 of 15 Buildings in Stormont, Northern Ireland (designed 1925 and constructed 1928-31). India Buildings represents one of his most significant works.

After examining all the records and other relevant information and having carefully considered the architectural and historic interest of this case, the criteria for upgrading are fulfilled. India Buildings is therefore recommended for upgrading from Grade II to Grade II*.

India Buildings, constructed in 1924-32 to the designs of Herbert J Rowse and Arnold Thornely, isrecommended for upgrading to Grade II* for the following principal reasons:

* Transatlantic influence: Liverpool's deep historic links with the eastern seaboard of the United States, and the influence of Charles Reilly's Liverpool School of Architecture and its promotion of an American form of classicism in the early-C20, as well as Herbert Rowse's personal experience of working in New York and Chicago, are clearly reflected in the building's architecture and design. Through its monumental scale, planning, architectural treatment and mixed use, India Buildings emulates the most impressive early-C20 commercial buildings of the US, and in particular, the buildings of New York City; echoing the designs of firms such as McKim, Mead & White;

* Architectural interest: its imposing architectural effect and beauty is achieved by its impressiveness of mass, and its clean surfaces and proportions, rather than ornamentation. Decoration is judiciously placed toenhance, rather than detract from, the building itself, and its Italian Renaissance and American Beaux-Arts influenced design reinterprets classical styling in a modern way;

* Architects: it was designed by Herbert Rowse and (Sir) Arnold Thornely, both of whom have other highly graded listed buildings to their name. Rowse, in particular, was one of the most influential regional architects of the inter-war period and India Buildings represents one of his most significant works;

* Planning interest: it is an excellent example of a British building following the US-style grid system of town planning; the building occupies an entire city block and incorporates a central shop-lined arcade connecting Water Street with Brunswick Street, as well as an entrance to the James Street underground station;

* Interior quality: the interior is of a superior quality and incorporates high-quality finishes and materials throughout, including an extensive use of Travertine marble and terrazzo. Several areas are of particular note, including: the elevator halls with their Travertine-lined walls and coffered saucer-domed ceilings; the central arcade with its coffered barrel-vaulted ceiling and decorative bronze shopfronts; and the opulent Lloyds Bank interior, which is a tour de force of marble and decorative metalwork, as well as incorporating abundant figurative and symbolic imagery and an impressive coffered ceiling with coffers that mirror the octagonal shapes of the building's corner lobbies;

· Degree of survival: the building is virtually unaltered externally and retains its major interior elements;

* Group value: it has strong group value with the Grade II* former Martins Bank (1927-32) situated diagonally opposite on Water Street, which was also designed by Rowse and also derives its architectural influence from the north-eastern United States. Additional group value also exists with other nearby listed buildings on Water Street and Pier Head, most of which are highly graded; together they form a group of hugely significant commercial buildings at the heart of Liverpool's central business district.

Agreed: India Buildings is one of the great achievements of Rowse and the Liverpool School. It fully merits designation in a higher grade.