The Liverpool Everyman.
A Tragedy Played Out Before Our Very Eyes-Why Did They Have To Knock It Down? 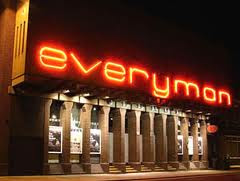 Written by Wayne Colquhoun
Yes it can only happen in Liverpool a city where the clowns in charge take a piece of culture and raze it to the ground and then make a full scale press assault in order to pull the wool over the eyes of the people.....and almost succeed.

Even all the luvvies who live and work around the Hope street area did nothing.
I was so bogged down with world heritage issues, and why should me and my colleagues do everything, to kick up a fuss over this tragic event being played out on centre stage right in front of everyone.
It is a deep regret, because both me and my colleagues at LPT have a social conscience and we now feel guilty for not arguing for its retention.
They even sold the fittings off on the basis of "Own a piece of history".
This, done by the very people who removed the historical context.
The Everyman Theatre was not the best piece of architecture, there is no denying that, but it was this theatre that added to the cultural identity of the city.

From the 1960's and 70's it grew.
In the 80's there were some of the countries most iconic theatre perfrmed there, that inspired films. All this emanating from this little provincial place, with big ideas.
Some of its playwrights would become houshold names, can you believe that. Liverpool became European Capital of Culture in 2008 because of places like the Everyman.

I can even smell the grit and sweated determination that you felt emanating from the walls as I write.
I can conjure up images of actors pouring their hearts out, crying, laughing out loud, entertaining inspiring, motivating, moving boundaries in their art .

I also recall seeing MacBeth, with one of Liverpool's sons the actor David Morrisey, god it was an awful. thing.
http://www.telegraph.co.uk/culture/theatre/drama/8513038/Macbeth-Liverpool-Everyman-review.html  It went on and on, and on. Made worse by the fact I had just had kidney stones removed, I felt I was being tortured both on and off the stage.
You are not supposed to criticise Shakespeare, but really, in Morrisseys dying scene that went on forever, I unwittingly spoke out, just under my breath, only to get a crack in the ribs "Oh just die will you so I can get home"
Yes I have also been bored to tears there, but it all counts.
The walls were rich with history, the spirit that this place absorbed became a breeding ground for future generations.

It was a little rough around the edges, reminding us of that cheeky little scouser that we all know that makes us cringe but instead you laugh and love him.
Yes the scruffy little kid down the road that looks a bit dirty but you know its only skin deep and its nothing a bit of soap and water wouldn't clean up.

So they have a bit of cash slapping around in Liverpool and what have they not managed to homogenise they think, The Everyman.
And what do the uncultured clowns who are in control do.............they knock it down, and tell us its all going to be alright because we are getting a new one.

Its like buying a load of duty free cigarettes because they are cheap and then you remember you don't smoke. Did the NWDA have surplus funds they needed to offload.
They bulldoze it right in front of the noses of the posh little dears that can now afford to live in the, now gentrified area of Hope Street, as they now call it, The Georgian Quarter.
I don't begrudge them the money they have earned it, but my recollection is that it was the anger and oppression of a generation inspired by John Osbourne, Harold Pinter and Tom Stoppard plays that made this place what it was. It had history in its walls.
The bricks oozed the heritage and the past words of artists that had found their feet there.
The cafe in the basement was an institution. http://www.liverpoolconfidential.co.uk/Food-and-Drink/Bars-and-Booze/Everyman-Bistro-the-final-countdown  It was the place that characters such as Arthur Dooley and the art teacher who taught Stuart Suttcliffe came to blows. Everyone has a tale to tell about the place it had character, and characters were attracted there.
It was a place for renegades, it was a place for actors and musicians. It was a place you could just have an unpretentious drink. 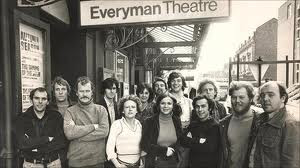 This was the theatre that saw fledglings such as Pete Posslethwaite and others turn into accredited actors. It was a breeding ground for actors who were in, Boys from the Blackstuff , some, shouting Gizza Job and went on to get a massive one, starring in Lord of the Rings.
Willy Russell plays were put on there and were made into films.
But it all started with ordinary people. How can you measure the decades of people who had chatted and planned and plotted there.

Richard Hawley summed it up at a recent Philharmonic concert

http://liverpoolpreservationtrust.blogspot.co.uk/2013/02/they-have-knocked-everyman-down-how.html Live on stage he said "I cant believe they knocked The Everyman down. Or words to that effect.
And what do they do now, with "Our" Everyman, spend a fortune on destroying its soul, like they did, in my opinion, with the Bluecoat that reopened in 2008, that still had Herbert Tyson-Smiths sculpture studio intact. Not anymore, its gone.
Will the Everyman demolition destroy its soul? Yes, it has for me.
But all we hear from Everyman and its dog..... is silence. Where is the alternative argument that we used to breed there.
It is being hailed as a great success, Regeneration in fact. Its not, its disgeraceful act of cultural vandalism.

I would prefer the gritty edge that it had, and with a little gentle modernisation you could have kept its unique-ness, the thing that made it special.
Gazing at the Tragedy that has befell my very eyes, everyone seems to have been taken in by it, not a murmurs of dissent from the masses its a real shame from a city that used to fight for its heritage.
They have knocked down an institution and are building a plastic replica of the very thing that should have been retained.............History and tradition obliterated.
It wanted saving from itself and the people who ran it.
And for all the great playwrights, whose work was played there I say, sorry for what they have done, the Oligarchs of Liverpool have made huge mistake. Pete Possethwaite is probably be turning in his grave. Why was there no campaign to save it.
This tragedy was sanctioned under Warren "War Zones" Bradley's stint as leader and has now, as with Central Library, been hijacked by Joe Anderson http://www.liverpooldailypost.co.uk/liverpool-news/regional-news/2013/06/18/new-everyman-theatre-a-step-closer-as-topping-out-ceremony-held-99623-33489865/  And all this played out before the adoring public of the Daily Ghost getting the news from The Everyman-Playhouse PR press plumpers and its Directors Deborah Aydon and Gemma Bodinetz who have worked the system to their advantage.

I recently received a phone call asking me for money to contribute towards it. It now looks like they have run out of cash and are now begging bowl to the masses.
John Osbourne's most inspiring play that informed a generation that inspired so many writers and artists that performed at The Everyman was called, look Back In Anger.

CODA
And just across the way the Historic Wellingtons Rooms cant get a penny to save its soul. While it lays rotting.
You know what it may be a good thing. They will probably wreck that too, with bad design.
Right now the Council are probably negotiating with some dodgy property developer who knows Frank McSpiv and is a member of Downtown Liverpool  In Joe Andersons Pocket.