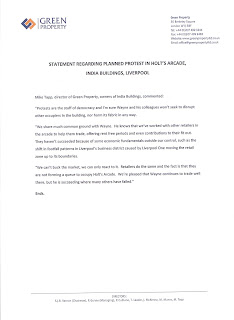 Mike Tapp of Green Property Group issued a statement as the proposed demonstration over their handling of one of Liverpool's Historic properties was to go ahead. The first paragraph says "Protests are the stuff of democracy and I am sure Wayne and his colleagues wont seek to disrupt other occupiers of the building, nor harm its fabric in any way".  First of all  Dewhurst the Joiner is sent out to vandalise India Buildings bronze fitments, with the removal of 6 architectural fittings that were removed without planning permission,  and then he insults the intelligence of those protesting by asking them not to harm the fabric. THEY WERE THE PEOPLE PROTESTING AGAINST HIM. You couldn't make this up. Whether his press statement was prepared by him or Dougal Paver who Green have employed to mitigate the situation is not clear. But the thing that is clear is that a lot of people turned up, over a hundred some a bit late or early and they all signed the SOS "Save Our Shops petition". Green made further,  comments in this statement regarding giving rent free periods to other shopkeepers and help with their fit outs, which is a nonsense.  They did give Robert Wade-Smith a rent free period while other shopkeepers struggled, oh and they replaced a foot of skirting board and layed some carpet tiles for him. Big Expense for sure, they are so generous Green Property of Berkeley Square London. Was Robert Wade Smith their consultant who said there was no use for the shops in Holt's Arcade and they should be made into offices?  Was he wrong to think he had any credibility left after his company went into liquidaton leaving debts to local companies.  Holts Arcade shopkeepers welcomed him even though it appeared he was plotting to bring "Brands" to Liverpool's Historic India Building. http://waynecolquhoun.blogspot.co.uk/2011/12/wade-smith-comes-to-india-buildings.html
But Green helped him without helping the tenants that had been there for decades, in most cases completely ignoring them.

The peaceful demonstration was publicised in the Liverpool Echo the next day.
http://www.liverpoolecho.co.uk/liverpool-news/local-news/2012/12/06/peaceful-protest-over-possible-closure-of-arcade-in-liverpool-s-india-buildings-100252-32371699/

It was good to see so many people who love this building making themselves heard and sending a clear message to Green Property that this is our history they are trying to damage.

Now they say they are investing, funny they said that 4 years ago
http://www.placenorthwest.co.uk/news/archive/3148-cbre-advises-green-on-india-buildings-revand.html