Save The Futurist-From Neptune Developments. And Liverpool City Council Spivs. 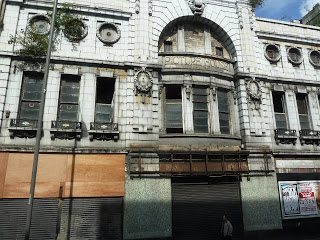 Its that man again Malcolm Kennedy, the property developers friend, and this time its Neptune Developments he is helping. Neptune who trashed the World Heritage Site with the Three Black Coffins on Mann Island. (Did one of Neptune's Directors work at the City Council planning department)? This time Malc has taken time off from his main job working for Peel Holdings to do some part time work for Neptune.
We say; You cant have a city council that are property developers.
There is a conflict of interests.
But this is Liverpool where Mayor Joe Anderson has allowed the line between acceptable development that benefits the city, and down right money making schemes for dodgy property developers to become blurred. Remember the scheme whereby the city council sold St Andrews Church to a convicted fraudster for a quid. http://liverpoolpreservationtrust.blogspot.co.uk/2011/12/st-andrews-church-sold-to-convicted.html
Previously we wrote about the Lime Street decay.
http://liverpoolpreservationtrust.blogspot.co.uk/2011/08/call-this-regeneration-liverpool-lime.html


David Bartlett recently wrote
A PROJECT to revitalise Liverpool’s rundown Lime Street area has taken a major step forward.
Liverpool council is in the process of agreeing a deal to take over a series of properties on the eastern side of the street between The Crown and The Vines.
Liverpool-based Parkmoor Group has agreed to sell its interests to allow the city to create a large single development plot.
And the council is also in talks with Anglo Irish Bank, which controls the historic derelict former Futurist cinema, after its owner Futurist Development Limited went into liquidation.
The scheme is by Regeneration Liverpool, a joint venture between regeneration specialist Sigma Inpartnership, Neptune Developments, and Liverpool council.
Architects Broadway Malyan, who designed the three granite block buildings at Mann Island, were asked to draw up some initial ideas including a series of offices, shops and student flats.
The project is estimated to be worth around £38.7m, with the potential to create 310 jobs.
Cabinet member for regeneration, Cllr Malcolm Kennedy, said: “This is one of the key projects for Liverpool that I want to see happen.”
A campaign is currently running to save the facade of the Futurist, which first opened in 1912, but has sat abandoned since 1982.
But Cllr Kennedy said he was unable to give a firm commitment that the facade could be saved because the exact condition of the building was not yet known. Much of the building behind the facade is in a major state of disrepair.
He said: “I have given a commitment to the campaigners and their architectural advisers to involve them once the proposals are drawn up.”
Regeneration Liverpool’s business plan reveals that an application has been made to the Homes and Communities Agency for funds to acquire the Futurist.
The report also states that a heads of term agreement has been reached with Parkmoor about buying the firm’s properties on the eastern side of Lime Street.
The cost of buying up properties to assemble the site will cost an estimated £6m.
Architects BDP, who devised the blueprint for Liverpool One, have also been asked to draw up a masterplan for the Adelphi Hotel area of Lime Street which leads into Brownlow Hill.
The study will look at potential ideas for developing key sites in the area such as the Mount Pleasant car park.
The business plan estimates that a planning application could be submitted as early as the summer for the first phase, with work possibly starting next year.

10:19 PM on 15/4/2013
I was initially delighted to hear of the intended revamp of Lime Street. But, when it became clear that there would be a direct involvement of Neptune Developments, my happiness soon dampened. This company have the knack of gaining access to high profile locations, and blighting them with buildings of banal mediocrity, which detract from what is already there. Their development on Brownlow Hill now means we are denied views of the iconic Victoria Building from across the university campus.. The nondescript clutter around the Catholic Cathedral is theirs. as is the carbuncle at Mann Island, along with the Lego monstrosity at the mouth of the Mersey at New Brighton.. They did Queens Square and now they will do Lime St.. Well and truly

another calling themselves Dubliner says

3:16 PM on 15/4/2013
More sloppy journalism from the Echo. The Anglo Irish Bank hasn't existed since it was wound down in 2011 being one of the major players in Ireland's Banking Crisis. Now either the journalist meant it's successor the IBRC or more likely the Allied Irish Bank (AIB).
Echo please double check your facts before reporting them, your mistakes are becoming far too common place these days.


So why are the City Council buying land for property developers?
Posted by Liverpool Preservation Trust at Tuesday, April 23, 2013