Elliot Developments-Where Is All The Money Coming From? 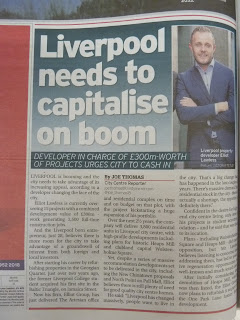 David ward writes;
I was asked the other day several questions about Elliot Developments, and one of those was quite clear.
Where Is The Money Coming From?
That is a question that keeps rearing its head every time a new development is announced by the Oldham Echo.
Why Don't They, The Liverpool Echo, raise any questions about how a new obscure developer can get so much of the land in Liverpool and earmark it for student shoeboxes.
So one development funds another in property circles but someone has to pay the wages and the money has to come from somewhere.
ONE DEVELOPMENT IN THE BALTIC TRIANGLE HAS TO HAVE A GENERATOR OUTSIDE ON THE PAVEMENT BECAUSE THERE  IS NO ELECTRIC TO A BLOCK OF STUDENT FLATS.
How can the planners allow that to happen, nudge, nudge, wink, wink.

WILL THESE CURRENT DEVELOPMENTS PROVE TO BE THE BIGGEST PONZI PYRAMID SCHEME THE CITY HAS EVER KNOWN.